Scientists at the University of Liverpool have unveiled a robotic colleague that has been working non-stop in their lab throughout lockdown.

The £100,000 programmable researcher learns from its results to refine its experiments.

“It can work autonomously, so I can run experiments from home,” explained Benjamin Burger, one of the developers.

A new report by the Royal Society of Chemistry lays out a “post-Covid national research strategy”, using robotics, artificial intelligence and advanced computing as part of a suite of technologies that “must be urgently embraced” to help socially distancing scientists continue their search for solutions to global challenges.

Robo-chemist at work in the Liverpool lab

The robotic scientist is currently embarking on a series of tests to find a catalyst that could speed up the reaction that takes place inside solar cells.

But it could, according to Prof Andy Cooper, the materials scientist who has put the robot to work in his lab, be used in the fight against Covid-19.

“We’ve had a lot of interest [in the robot] from labs that are doing Covid research,” he told BBC News.

“Covid, climate change – there are lots of problems that really need international co-operation. So our vision is we might have robots like this all across the world connected by a centralised brain which can be anywhere. We haven’t done that yet – this is the first example – but that’s absolutely what we’d like to do.”

Today, in a world where scientists also need to limit their time in the lab and maintain social distance from each other, the robo-scientist has come into its own.

“It doesn’t get bored, doesn’t get tired, works around the clock and doesn’t need holidays,” Dr Burger joked.

On a more serious note, he said that the robot had transformed the speed at which he could carry out research. “It can easily go through thousands of samples,” he said, “so it frees up my time to focus on innovation and new solutions.”

Like robotics designed for research in Space, machines like this could also take on riskier experiments – in harsher laboratory environments or using more toxic substances. 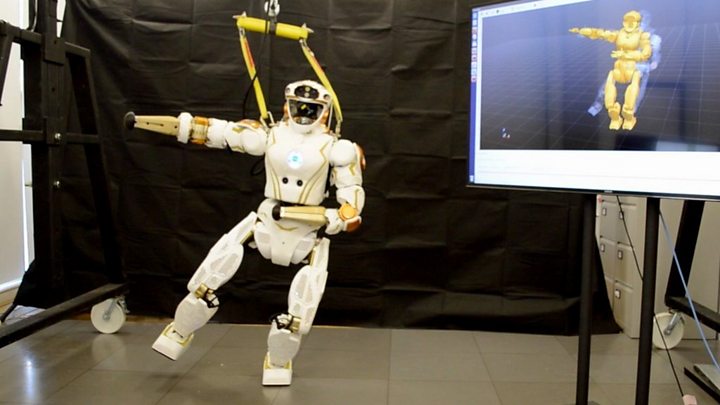 That, according to Deirdre Black, head of research and innovation at the Royal Society of Chemistry, is why UK science needs to build new technologies into its infrastructure.

“This is about human beings harnessing all of these digital technologies, so that they can go faster – discover and innovate faster and explore bigger and more complex problems, like decarbonisation, preventing and treating disease, and making our air cleaner,” she told BBC News.

So does this mean that while many scientists have been in lockdown, the machines have come to take their jobs?