Hello from Brussels, where the big question being asked this morning, as so often since the EU referendum in June 2016, is what the hell are the Brits up to now? Meanwhile, the latest on Phil Hogan’s replacement as EU trade honcho is as follows. Dublin has put forward two candidates to take his spot as Ireland’s commissioner. However, it’s almost certain there will be a mini-reshuffle and the trade job will go to an existing commissioner, possibly the Latvian Valdis Dombrovskis or the Finn Jutta Urpilainen. It’s safe to conclude that losing such a prized position was not one of Ireland’s finest political achievements. Talking of job applications, the first round of selections for the World Trade Organization director-general starts this week, and we’ll find out next week which three of the eight candidates have been eliminated.

As to what the organisation should be doing, today’s main piece looks at recent criticisms of the WTO by US trade representative Robert Lighthizer. Our Tit for tat guest is Bipul Chatterjee, executive director at CUTS International in India, while our chart of the day looks at the latest bad news for China’s phase-one trade deal with US.

For the past three years the magma has habitually bubbled away underground without breaching the surface, but the past few months have seen repeated eruptions from Mount Lighthizer. Following an earlier effusion of self-congratulation over the Trump administration’s reshoring efforts (which we really didn’t think much of, see Tall Tales here) the latest spurt of lava from the pugnacious USTR emerged a few weeks ago. Lighthizer used an op-ed in the Wall Street Journal to detail his view of problems and solutions in the WTO.

Of course, all this may shortly be irrelevant if (to the fervent wish of pretty much everyone in the trade world) Trump loses the US presidential election. Still, some version of these critiques will inevitably resurface under any future US administration, so let’s have a look. As it happens some of Lighthizer’s points are quite reasonable, if overstated. But the solutions proposed tend to the impractical or disingenuous.

The most salient are the familiar US attacks on judicial over-reach in the WTO, Lighthizer’s rationale for paralysing the organisation’s appellate body (AB). To credit him, and without endorsing his tactics, it’s kind of remarkable how quickly a widespread but private grudging acceptance of this critique among the WTO membership has intensified and gone public. Last month we ran interviews with the two presumed front-runners for the WTO director-generalship, Amina Mohamed and Ngozi Okonjo-Iweala, who both explicitly said the Americans had a point.

The main resistance to the US critique has traditionally come from the EU and the WTO secretariat, the latter embodied in the quietly powerful Werner Zdouc, the Austrian longtime head of its AB section. Zdouc has now been marginalised by being moved to a job far away from dispute settlement, while the EU has softened its opposition. Back in March, Hogan was actually just about to deliver a speech in Washington shifting towards the US point of view, before Covid-19 reordered priorities somewhat.

Lighthizer’s preferred model for dispute settlement is a one-stage process with a review mechanism that is applicable only in exceptional circumstances, not a routine appeals body. This still looks a way off from the EU’s insistence on a two-tier system, but a less uncompromising US administration could probably reach a deal.

What are Lighthizer’s other beefs? Last week we pointed out that his attacks on preferential trade deals for undermining multilateralism were reasonable but hypocritical, given the US’s and particularly Trump’s enthusiastic pursuit of bilaterals. There’s another problem, as follows. Much though we’d like to think that governments sign trade deals because they’ve read tub-thumping FT editorials, they’re actually driven by political pressure from their exporters. These days, whatever Lighthizer himself might care about, the active business lobbies in advanced economies are focused less on tariffs and more on behind-the-border stuff such as intellectual property and regulation. But there’s strong resistance among developing countries to agreeing binding new rules on those in the WTO. Hence it’s hard to imagine any plausible multilateral deal that reduces lobbying pressure for bilaterals.

Speaking of which, Lighthizer argues that multilateral tariff reduction has been hugely asymmetric (true) and all countries should have the same tariff schedule “with minimal exceptions” (hmmm). There’s an obvious hypocrisy countercharge here: where were US tariffs at a similar stage of development to India today?

On top of that, the biggest distortions in goods trade in both advanced and developing economies are in agriculture. But richer governments, like the US, can afford to support farmers through subsidies rather than import duties. To do goods liberalisation fairly, you’d need a grand bargain where emerging markets cut agricultural tariffs in return for the richer countries reducing farm subsidies. Wait a second, we had one of those. It was called the Doha round. And the Americans did their bit in killing it by passing a huge trade-distorting farm subsidy programme at a critical juncture.

See what we mean? Cogent if overheated arguments, frequently disingenuous and/or politically impractical solutions. On this showing Lighthizer has a great future as a newspaper opinion columnist. But actually fixing the WTO is going to take more nuance and even-handedness than this. And the US is going to have to contribute to change as well as demanding it.

Chinese exports have risen year on year for three straight months, raising hopes of a wider resurgence in international trade that has been hammered by the pandemic. Fresh figures show its exports jumped 9.5 per cent in August in dollar terms compared with the same month last year, above expectations of a 7.5 per cent rise. But its purchases of US goods as agreed in January’s phase-one trade deal are still falling behind. According to the Peterson Institute for International Economics, US exports to China of the products covered by the commitments have amounted to $48.5bn this year, compared with a prorated year-to-date target of $100.7bn. 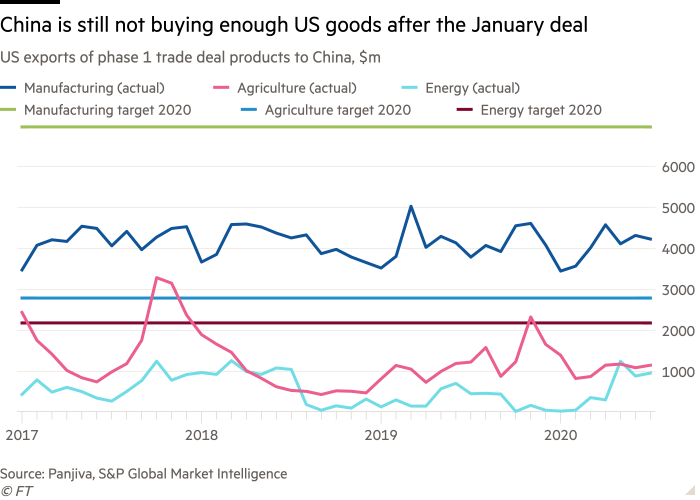 What are the sticking points in a trade deal between the UK and India likely to be?

Given the complementary nature of their economies, it is unlikely that there will be too many sticking points except in the case of some high-value agricultural and/or agri-based items such as whisky. The focus for India should be on calibrated tariff liberalisation and harmonisation of non-tariff measures in 17 so-called Champion Sectors identified by the Indian government — such as railways, shipping, biotechnology, textiles — to enhance their global competitiveness.

India can gain hugely by acquiring modern knowledge and technologies from UK-based companies. While India’s productivity has remained steadily positive over the past several years, the challenge remains to reduce its incremental capital-output ratio from the current level of 4.5 to 3.6. This should be done over the next three to five years by applying new knowledge and technologies.

In addition, India needs to reform its banking and financial sectors, and the UK’s experience, particularly with regulations for developing a robust bond and mortgage market, will be hugely beneficial.

How much of a threat to Indian trade do the current border tensions with China pose?

The threat is there but it is unlikely to be huge. It is unlikely that China will reduce its imports from India. That’s because India primarily exports industrial products to China and it is yet to develop alternate supply sources.

India is less reliant on Chinese imports though, so while both parties should take steps to reduce border tensions, ironically it is becoming a blessing in disguise for India. On the one hand, it has started taking steps to reduce the Chinese imports of items of mass consumption. On the other, there are serious efforts to diversify intermediate inputs from sources other than China, including encouraging domestic production in India — such as domestic production for fermented APIs (active pharmaceutical ingredients).

While this process of de-coupling will take some time to gain momentum, the Supply Chain Resilience Initiative that India has joined along with Australia and Japan is a potential game changer in the Indo-Pacific region — particularly if Russia joins up too.

Has the lack of a working appellate body at the WTO affected India’s appetite to withdraw its export subsidy schemes, after the WTO ruled in November last year that these were illegal?

India is committed to a rules-based multilateral trading system and it is unequivocal about that. After the ruling of the WTO’s panel went against India, it had a right to appeal to the WTO’s appellate body. It’s not India’s fault that it is not functioning in the manner that it should.

At the same time, India should reform its export subsidy schemes so that our industries become more competitive in the least trade-distortive manner. That process has started but we need to see how the Covid-19-induced disruptions will affect those sectors in terms of their production and employment.

The announcement of India’s new foreign trade policy, expected earlier this year, has been postponed due to the pandemic and it is unlikely to be in place in the near future. We need to first understand the full impact of Covid-19 on various sectors of the Indian economy and what kind of support that they need for their revival. In such a situation of disequilibrium, it is necessary to have flexibility in designing and applying support to various sectors of the Indian economy. One-size-fits-all approaches will not work.