Facebook has removed or restricted thousands of groups and accounts sharing and promoting the QAnon conspiracy theory.

It is part of a new policy that aims to limit the risks to public safety posed by QAnon, “offline anarchist groups” and US-based militia organisations.

It also imposed restrictions on more than 1,950 groups and 440 pages.

More than 10,000 Instagram accounts associated with the movement have also been restricted.

QAnon is a conspiracy theory that believes US President Donald Trump is waging a secret war against a “deep state” network of paedophiles who are powerful government, business and media figures.

When asked his opinion on QAnon during a press conference, President Trump claimed not to know much about it, saying: “I understand they like me very much, which I appreciate”, remarks which have been interpreted by some as tacit approval for the conspiracy.

As well as targeting the QAnon conspiracy, Facebook said that they had also removed content from other “militia organisations and those encouraging riots”, including some antifa (anti-fascist) groups.

It said it had growing concerns over groups which have “celebrated violent acts, shown that they have weapons and suggest they will use them, or have individual followers with patterns of violent behaviour”.

“Where we go one we go all”, often abbreviated as “WWG1WGA!” is one of the most popular QAnon slogans

This means that these pages and accounts will not be recommended to users, the ranking of their content in newsfeeds will be reduced, and titles and hashtags associated with them will be limited in search results.

In addition, Facebook will ban the groups from placing adverts or selling products, and prohibit fundraising in their support.

QAnon began in October 2017 on the anonymous message board 4chan. A user claimed to have top-security clearance within the US government and signed off their posts anonymously as “Q” – hence the name QAnon. Q communicates in cryptic posts and claims to be involved directly in a secret Trump-led investigation of a global network of child abusers.

QAnon followed on from the “pizzagate” saga in 2016 – a fake theory about Democratic Party politicians running a paedophile ring out of a Washington pizza restaurant.

QAnon influencers have big audiences on social media. They urge followers to “do their own research” – in other words, watch YouTube videos and talk to other supporters – to solve Q’s puzzles. In its nearly three years of existence, the conspiracy has drawn huge traffic on Facebook, Twitter, Instagram, YouTube and Reddit, attracting hundreds of thousands of dedicated followers. This includes celebrities and dozens of candidates running for the US Congress this year.

During the coronavirus pandemic, Q influencers have spread unfounded theories about coronavirus, calling it a “deep state” hoax, and have promoted misinformation about face masks and vaccines.

Twitter banned thousands of accounts and said it would block QAnon urls, while TikTok deleted hashtags that signposted QAnon videos.

President Trump was asked about QAnon at a press conference on Wednesday.

When asked to comment on QAnon followers’ far-fetched theory that he is secretly saving the world from a Satanic cult of paedophiles and cannibals, he responded: “I haven’t heard that, but is that supposed to be a bad thing or a good thing?”

He went on to claim “we are saving the world from the radical-left philosophy that will destroy this country”. 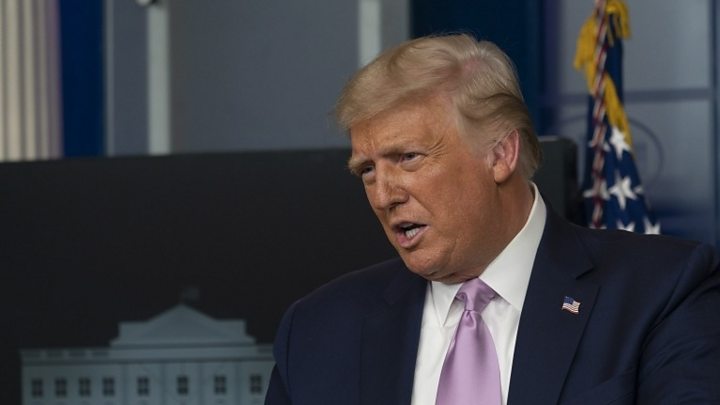 Mr Trump has, in the past, retweeted content from known QAnon sympathisers, as well as tweets containing hashtags used by believers in the conspiracy.

Some QAnon supporters are running for office including the Republican congressional candidate for Georgia.