Parts of the European economy which were hardest-hit by the pandemic are showing signs of recovery but other areas of activity that began to bounce back earlier have levelled off, suggesting the damage will be longer-lasting than some economists hoped.

Travel and tourism — an important part of southern European countries’ economies — is picking up from very low levels, according to high-frequency data indicators such as travel and mobility trackers. The figures are more up to date than official economic indicators, although they are also experimental and the extent to which they reflect the subsequent trends documented in official data is variable.

However, industry and trade indicators that improved in May and June are plateauing well below normal activity levels and there is no sign of any improvement in the labour market.

Christine Lagarde, European Central Bank president, last week warned of the headwinds that the economy faces. She said that “exceptionally elevated uncertainty” would continue to weigh on consumer spending and business investment.

Carsten Brzeski, economist at ING, said that “for the countries which lifted the lockdown measures first and which got out of the crisis the earliest, the first signs of levelling off have already appeared”.

Andrew Kenningham, chief Europe economist at Capital Economics, said the data suggest that “the lockdown was not as damaging in Germany (as in other major eurozone countries) but the recovery there has been a bit slower and may have weakened more recently”.

Chris Hare, economist at HSBC, noted “a risk that the consumer recovery will peter out as government job support schemes are scaled back in the autumn”, although he added that “some of the recent data, particularly on the consumer side, have been encouraging” as they were “pointing to some pent-up demand coming through”.

But Barbara Teixeira Araujo, an economist at rating agency Moody’s, said that “pent-up demand will dry up soon” while slumping exports “will rein in the recovery” in trade-dependent economies such as Germany, and the tourism industry will continue to struggle.

Maddalena Martini, economist at Oxford Economics, warned that “limits to global demand and supply disruptions will continue to weigh on growth”.

European consumers have led the way in powering the continent’s economic recovery and high-frequency data suggest that some leisure activities are returning to normal volumes. 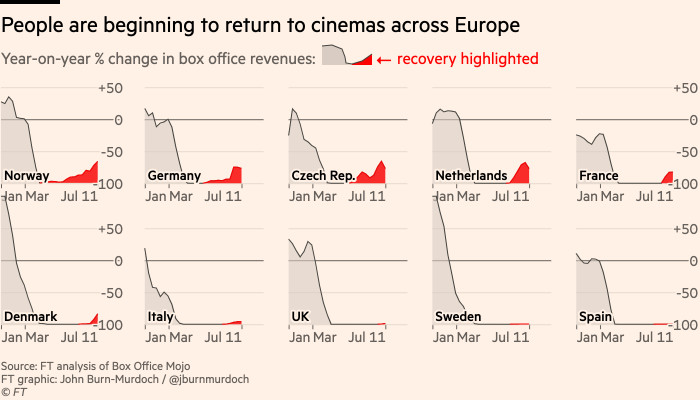 Footfall to retail and recreation destinations has largely normalised in countries including Denmark and Germany. In others, such as France, Italy and Spain, travel to leisure venues continued to increase in July.

Cinemas were among the last businesses to reopen and activity levels remain very low, but there are early signs that box office revenues are picking up in some countries.

The travel and tourism industry saw some signs of recovery in July as restrictions were lifted in most countries. Yet activity levels remain very depressed compared with pre-coronavirus levels, posing a lingering drag on tourism-dependent economies such as Spain, Portugal, Italy and Greece. 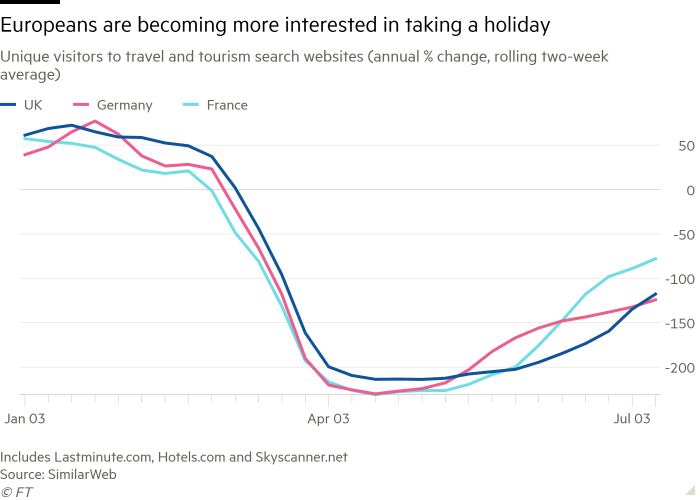 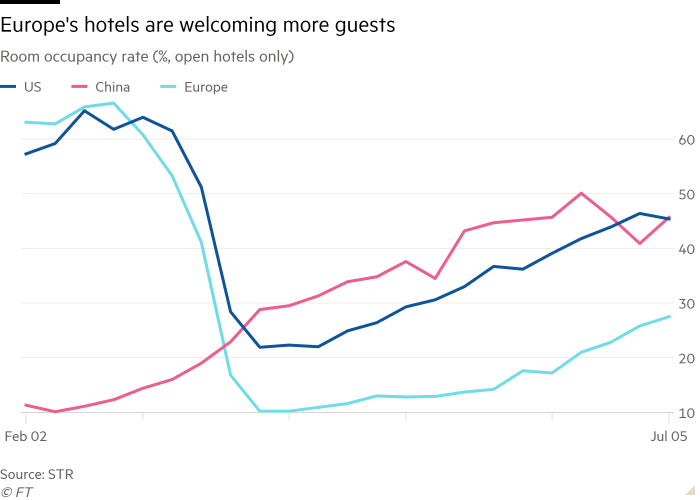 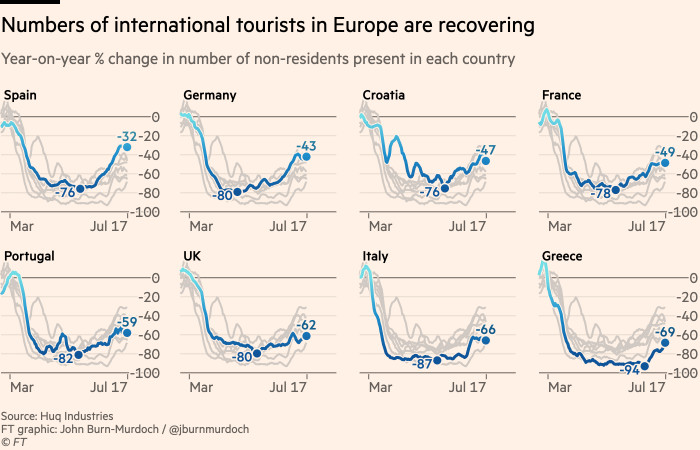 Air travel picked up strongly at the beginning of July as international travel restrictions were relaxed, according to data from aviation analyst FlightAware. However, European flight numbers remain well below pre-virus levels and have seen less of a recovery than Asia and North America.

European hotels have seen an increase in occupancy levels, according to the hotel consultancy STR. Experimental data from Huq, a company tracking geospatial location data, also indicate an increase in international visitors to European countries.

The post-lockdown recovery in industrial production and trade has lagged other sectors of the economy, as international demand remains depressed by high levels of uncertainty and lockdowns in other parts of the world.

Travel to workplaces picked up relatively early in the recovery but has since begun to plateau well below normal levels in many countries. 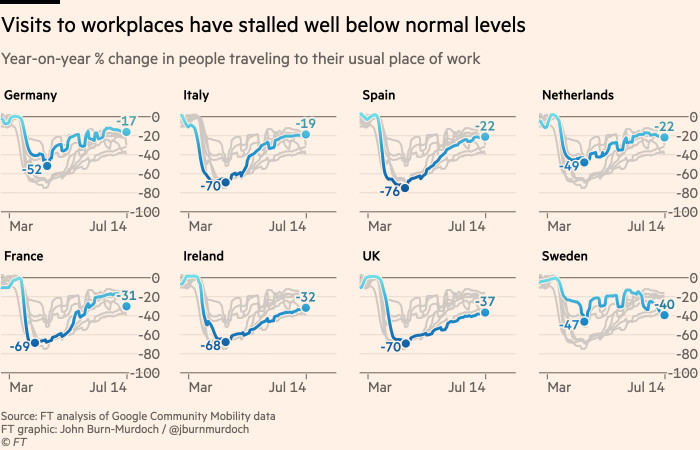 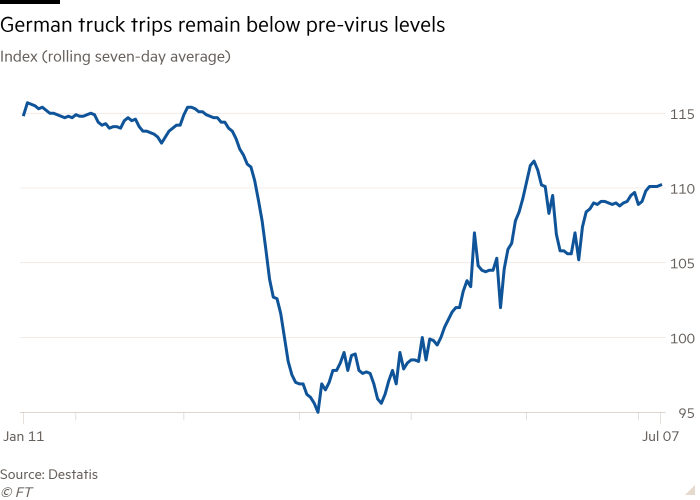 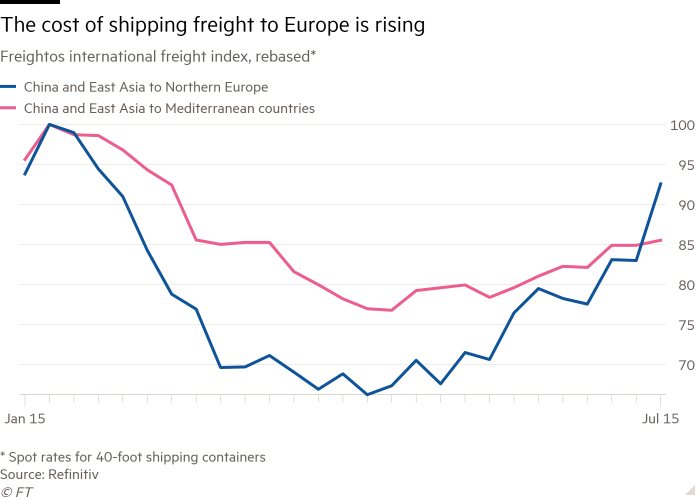 German truck toll mileage — which is regarded by some economists as a proxy for industrial production in the eurozone’s largest manufacturing country — stabilised below normal levels in early July, according to the German Office for National Statistics.

But container freight rates indicate that shipping volumes are growing, particularly to northern Europe — a positive signal for trade.

Although the number of job opportunities on offer has stopped shrinking, there are as yet few signs of any improvement in Europe’s labour markets, according to vacancies data from job search website Indeed.