The world is slowly emerging from the coronavirus pandemic that has resulted in the most severe global economic contraction since at least the 1930s.

Where lockdowns have eased and the virus is under control, economic activity is starting to recover — but because there is a lag of weeks to months between when official economic data is produced and the period of time it covers, it is out of date before it is published.

The FT will be tracking the most relevant alternative indicators to provide a first snapshot of changes in activity as they happen across key sectors and countries.

Official unemployment figures suffer from a lack of international comparability. However, other information can help shed light on the impact of the crisis — which has caused millions to lose their jobs or rely on government furlough schemes — on the employment market.

Job postings data from Indeed.com suggest that a labour market recovery has barely started. Countries, such as the US, which did not rely on furlough schemes to keep employees attached to their former companies, have seen both more unemployment and a bigger uptick in job postings. 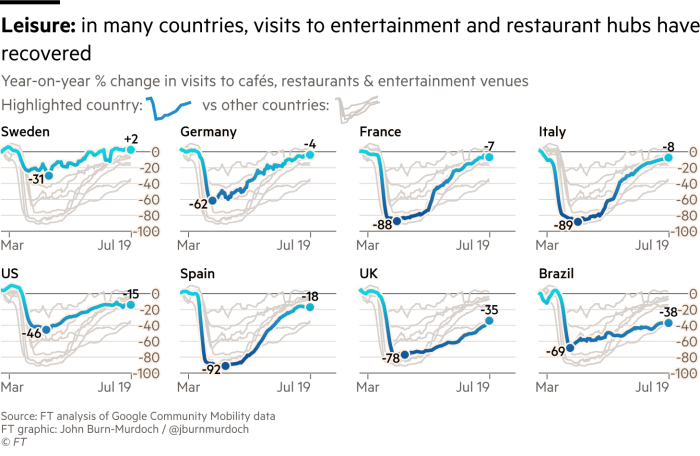 Household spending makes up the largest part of the economy in most countries, and the recovery largely depends on consumers regaining the confidence to increase spending from ultra-low levels.

Google Mobility data — which tracks footfall traffic — from retail and entertainment hubs is considered a proxy for consumer spending. It shows that people have returned to spending venues, but with large variations between countries. Retail footfall, which tracks the number of visits to shops, tells a different story. Consumers have been slower to return even as businesses have opened their doors.

However, retail spending is a small share of total household spending, and during the Covid-19 pandemic some consumers have preferred to purchase goods, such as groceries, instead of services, such as restaurant meals. Therefore, even a full recovery in terms of overall spending will not indicate a return to regular retail spending patterns. 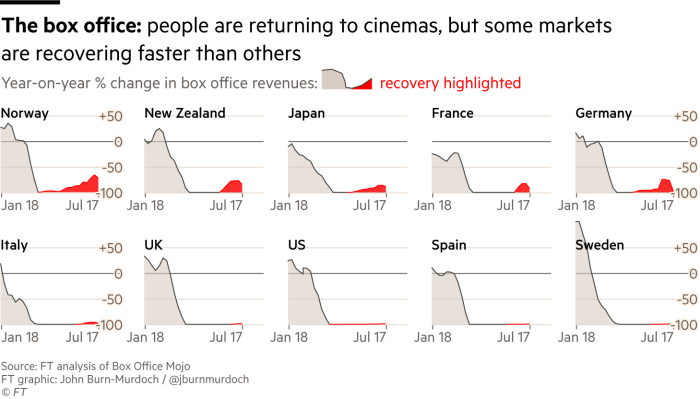 Consumers around the world are slowly returning to cinemas, which, like a large part of the entertainment sector and other indoor venues, have been hard hit by the pandemic. 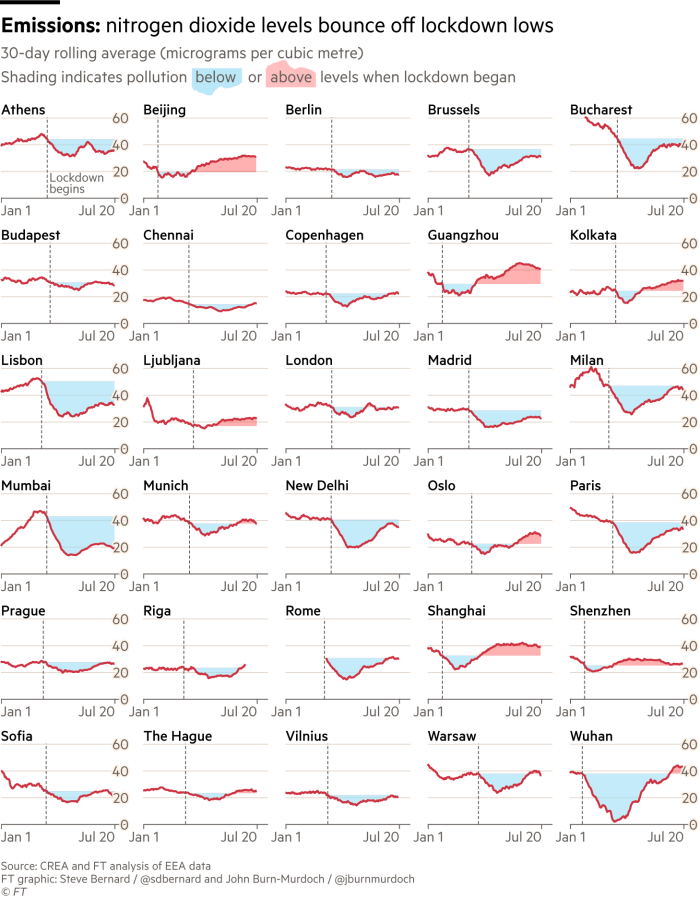 The pandemic has disrupted factories, supply chains and demand for goods. The resulting hit to industrial production has been heavy. Pollution, a measure largely associated with industrial emissions, has dropped during the lockdowns but it is beginning to rise again as economies reopen. 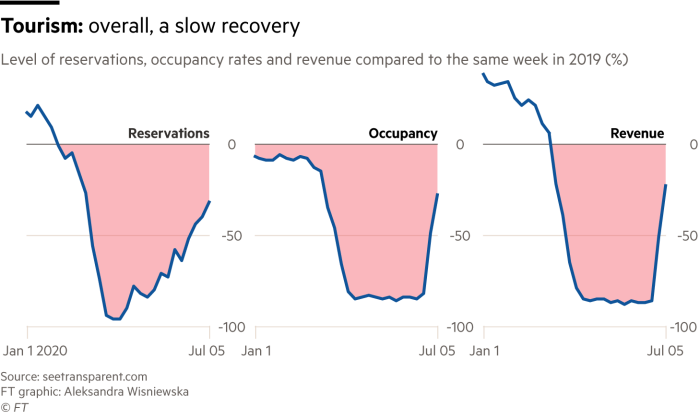 Tourism was one of the sectors most impacted by the strict lockdowns and travel bans in March and April. Global arrivals are set to shrink by between 58 and 78 per cent year on year in 2020, according the UN World Trade Tourism Organization. The body estimates 100 million to 120 million direct tourism jobs are at risk. 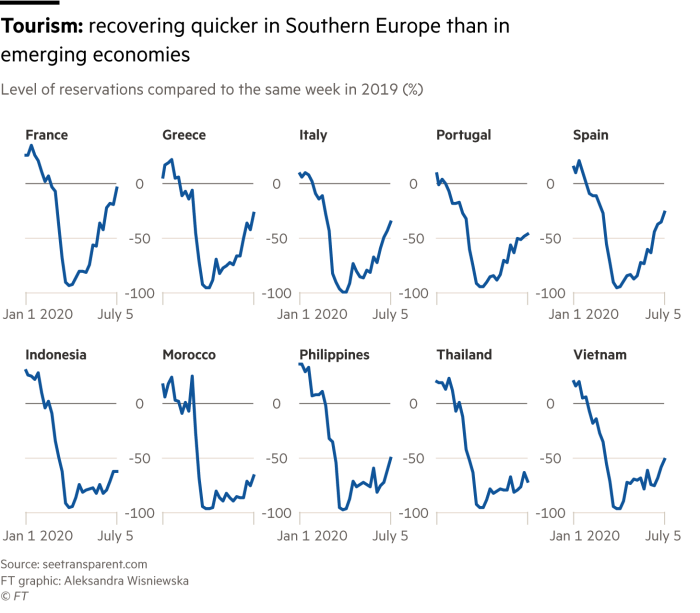 As lockdowns ease and borders begin to reopen across Asia and Europe, flight and hotel occupancy data shows that international mobility is slowly resuming, but levels remain largely depressed.

Worldwide, reservations remain well below last year’s levels but some countries are starting to bounce back, especially in European Mediterranean countries.

China’s economy was the first to experience severe disruption due to the coronavirus outbreak, which originated in Hubei province, and has been the first to begin to recover. As the world’s second-largest economy with links to supply chains around the globe, the pace of recovery in China is enormously important for the global economy.

The FT has constructed its own measure of the slowdown and recovery. Official figures lag behind activity, since they are mostly monthly, and China’s data is sometimes viewed as open to political manipulation.

After showing steady improvement since the trough in February, the index indicates China’s recovery has fallen back in recent weeks.

Two other indices, which have been given a lesser weighting, provide social and environmental context: box office numbers from Chinese cinemas — a good proxy for consumer activity — and air pollution in the 10 largest cities.