The coronavirus pandemic has devastated many businesses but Claus Risager has never been busier — demand at his Dutch-based company Blue Ocean Robotics has “skyrocketed”.

The company’s sales of disinfectant robots have risen 1,000 per cent this year on surging demand from hospitals, schools or airports such as London Heathrow. “Businesses where the perception of the customer is important want to show that they are doing something about safety,” Mr Risager said.

The pandemic is driving a shift in companies’ use of technology, both official statistics and business surveys suggest, making the automation and digitalisation industry one of the few winners from this year’s economic turbulence.

The spread of the virus “has accelerated the use of robotics and other technologies to take on tasks that are more fraught during the pandemic”, said Elisabeth Reynolds, executive director of the Massachusetts Institute of Technology’s task force on the work of the future. “It is fair to assume that some firms have learnt how to maintain their productivity with fewer workers and they will not unlearn what they have learnt.”

Robotics and automation-related international trade and output volumes have increased in many countries, bucking the overall downward trend in global trade.

US goods imports contracted 11 per cent in the first eight months of the year compared with the same period last year, but imports of industrial robots rose 5 per cent, according to data from the US International Trade Commission. 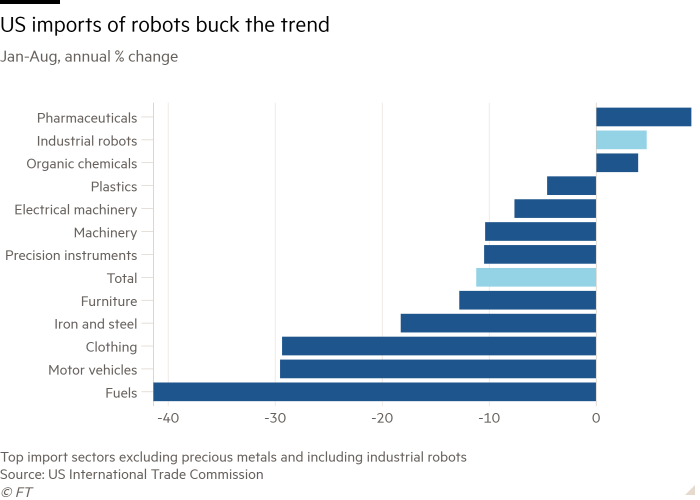 The number of US employees in computer system design dipped 2 per cent in September, compared with the same month last year — that is less than half the fall across manufacturing and professional services and compares to a 20 per cent drop for hospitality, food and accommodation.

In Japan, sales of industrial robots outperformed those of industrial machinery more generally, according to Japan’s Cabinet Office, while the number of robots exported from the country rose at an annual rate of 13 per cent in the second quarter, the Japan Robot Association reported. 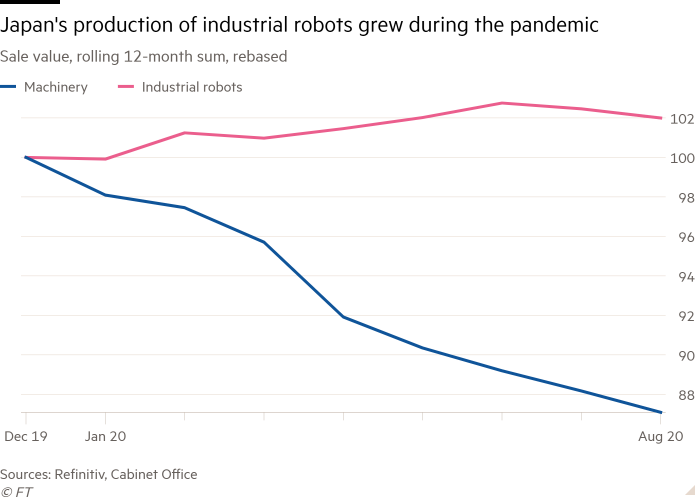 In August, China registered a 14 per cent annual growth in the production of industrial robots.

In the eurozone, production of special-purpose machinery and lifting and handling equipment, which includes industrial robots, has outperformed many sectors, particularly car production.

Eurozone employment was 3.1 per cent down in the second quarter compared with the same quarter last year, with professional jobs shrinking by 4.2 per cent — but employment in computer programming rose.

The pandemic is “a real boost for digital factory technologies”, said Patrick Schwarzkopf, member of the board of the International Federation of Robotics (IFR).

Some smart factories have continued to operate with workers monitoring and carrying out maintenance from home, he said, while the installation and operation of new tools and machinery has shifted to augmented reality, mixed reality and remote digital services as people were unable to travel. IFR expects the number of professional services robots in operation around the world to rise by 38 per cent this year and that growth to continue in the next two years.

Logistics robots account for the lion’s share and their numbers are expected to double between 2019 and 2021. But the use of all types of robots is set to increase, in particular in medicine and cleaning.

Digital interaction with customers has accelerated the equivalent of many years in just months, according to a recent survey of business executives by the consultancy McKinsey. Changes in digital and technology adoption are taking place about 25 times faster than before the pandemic, the survey found. 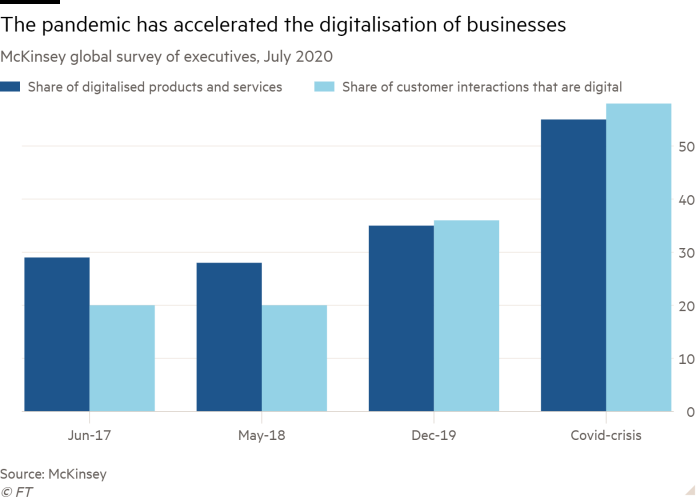 Executives’ attitudes have shifted from using automation for cost reduction to gaining a competitive advantage, McKinsey found. The majority expected the technological and digital innovations to remain in place even after the global economy recovers from the virus’ impact.

The shift has deep implications for the labour market; some economists fear it could erode jobs such as retail assistant and receptionist, although others say it should increase employers’ demand for workers with higher technological skills.

“There is nothing automatic about automation destroying jobs, although it always changes the character of jobs,” said Diane Coyle, a professor at the University of Cambridge. “What happens depends on the skills of the people working with the machines.”

Overall, in the next five years, “digitalisation will create more jobs in industrialised countries than it destroys”, according to Thiess Petersen, economist and senior adviser at the Bertelsmann Foundation, a think-tank.

“The development of a digital infrastructure requires corresponding investments and training measures — in other words, people who carry out these economic activities,” he said.

“There is no way back” from the push that the pandemic has given to automation, according to ZCS founder Mr Bernini.

His company, based in central Italy, has over 300 employees and produces robotics, software, renewable energy and automation solutions.

Despite Italy’s record economic contraction, ZCS continued hiring through the pandemic and expects its revenues to rise by 20 per cent this year. Its software and robotics products include smart lockers to distribute personal safety equipment and uniforms to workers in factories and hospitals.

Before the pandemic “the process of automation was seen as nice to have, as a possible improvement, but it has now become a way (for companies) to remain open and safe. It has become a need,” said Mr Bernini.

Robots are not a threat to human employment, Mr Risager argues. His company is hiring 20 people a month in roles from engineering to marketing.

“What technology does is transform jobs,” he said — although employers and policymakers must manage that transition.

Across Europe there are 12m people creating apps, jobs which did not exist just a few years ago, he noted. With a robot, “cleaners manage the robots, rather than scrubbing the floor” so technology “enables better-quality jobs”.

Despite the pandemic’s hit to his customers’ revenues, “all of a sudden” interest in Arcade’s products “increased quite radically”, Mr Book said.

The London-based start-up with seven staffers specialises in augmented and virtual reality. Its customers include hard-hit industries such as tourist attractions and retail.

Places such as museums and shops used to consider a virtual experience “peripheral” to their core business, but they have now shifted to thinking that “there aren’t any bigger priorities” than finding solutions for remote interactions, according to Mr Book.