The US economy added 661,000 jobs last month, as the unemployment rate fell to 7.9 per cent, highlighting the slowdown in the recovery of America’s labour market in the final stretch of the presidential election campaign.

The data released on Friday is the final monthly update before the November election and means Donald Trump will be shouldering the worst September jobless rate of any incumbent US president in postwar history.

The figures from the Bureau of Labor Statistics showed that American employers continued to restore some of the jobs they lost during the initial pandemic-related shutdowns, but at a significantly weaker pace compared to the summer months.

In July and August, the US economy created on average 1.6m jobs per month, compared to the 661,000 in September — and America has now recovered just 11.4m of the 22.2m positions it shed between February and April.

“The rate of improvement has clearly slowed, as the resurgence of the virus has constrained the pace of reopening, and the early signs for October are not encouraging,” Ian Shepherdson, chief economist at Pantheon Macroeconomics, wrote in a note.

“It is clear that the economic rebound is entering a new, weaker phase,” said Michael Pearce, senior US economist at Capital Economics.

The payroll gains last month were spread across most industry sectors, each showing more modest improvements. Leisure and hospitality added 318,000 positions, while retail gained 142,00 jobs and manufacturing employment increased by 66,000. Government shed 216,000 jobs, reflecting state and local government budget cuts and a small reduction of the workforce associated with the 2020 census.

The change in the unemployment rate, which is measured by a separate survey of households, was accompanied by a 0.3 percentage point decline in the labour force participation rate, in a discouraging sign for the recovery. According to the data, 695,000 Americans, predominantly women, exited the labour force last month, meaning they were no longer working or searching for work.

Another concerning trend in the report was the increase in permanent job losses to 3.8m, a rise of 345,000 compared to August. Temporary job losses continued to decline, by 1.5m over the month. Although the US economy has bounced back more rapidly than expected from the initial pandemic shock, many economists are concerned that the outlook in the coming months could be darker due to fading fiscal stimulus, fears about new waves of coronavirus infection, and possibly tensions over the election result.

Mr Trump, had hoped to make a strong economy the centrepiece of his re-election bid before the pandemic hit, when the jobless rate was at historic lows of 3.5 per cent.

But that task has been severely complicated by the economic devastation inflicted by the coronavirus, which has left Mr Trump in a worse position in terms of the pre-election September unemployment rate compared to Barack Obama in 2012, who overcame 7.8 per cent joblessness to win a second term, and Ronald Reagan, who overcame 7.3 per cent joblessness in the same month to win his re-election in 1984. 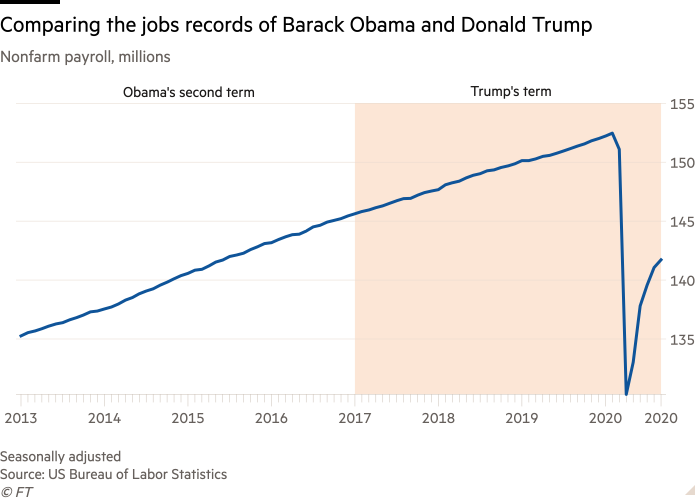 Nevertheless, Mr Trump is still trying to make the case that he would be a better steward of the economy than Mr Biden, who served as vice-president under Mr Obama.

Mr Trump has said he would seek a new round of tax cuts and further deregulation should he win a second terms, while Mr Biden has promised a combination of immediate stimulus for the economy and long-term public investments paid for with higher taxes on the wealthy.