The OECD has urged governments to adopt more targeted measures to support their economies now the initial wave of the coronavirus pandemic has passed.

With many nations struggling with a resurgence in Covid-19 cases, the Paris-based club of advanced economies said leaders should shift the focus of their programmes towards limiting the lasting scars from the crisis by helping people find new jobs.

In its interim economic outlook, the organisation praised countries’ initial blanket response of state support and raised its economic forecasts for 2020 as economies rebounded faster than expected once lockdowns were lifted.

But with the world likely to have to live with coronavirus for many more months, Laurence Boone, OECD chief economist, said it was time to switch strategy.

“The most difficult thing (for governments) now is deciding what to support and helping people in sectors most affected (by the virus) to change jobs,” she told the FT.

The aim was not to cut costs but to target help more carefully in a world where both advanced countries and emerging markets would have to live with coronavirus for most of 2021 until mass vaccination became available, she said.

In its report, the OECD said resources should be directed at companies “that are temporarily unviable, rather than helping to maintain ones that are ultimately unviable”. It recommended a shift towards public investment in new forms of growth rather than propping up sectors that might take years to recover.

If governments failed to take difficult decisions, they would create “zombie” companies and jobs that were just kept alive on government support schemes, it warned.

Following lifting of lockdown restrictions most countries’ economies have grown faster than the OECD expected in its last set of forecasts for May, even though the initial rapid recoveries have been slowing down.

Instead of a global contraction of 6 per cent in 2020, the OECD has now produced a central forecast of world economic output dropping 4.5 per cent this year, a figure it described as “still unprecedented in recent history”.

Upgrades to 2020 forecasts were concentrated in China and advanced economies in Europe, with the outlook for many large emerging economies, including India, Mexico and Argentina, deteriorating since May.

China is the only large economy expected to post a positive growth rate in 2020, the OECD said.

Its forecasts for 2021 have been revised modestly down for most countries, reflecting a shallower trough this year and a slightly brighter outlook.

But by the end of 2021, the OECD expects the global economy still to be ravaged by the coronavirus pandemic with output almost 6 per cent lower than expected in November 2019. 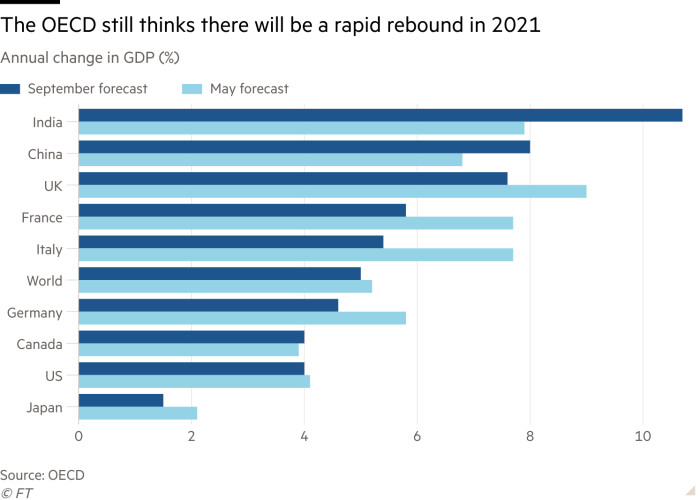 “Many major advanced economies could have lost the equivalent of four to five years of per capita real income growth by 2021,” the report said.

It acknowledged there was huge uncertainty around the forecast, with outcomes dependent on the spread of the virus, household behaviour, confidence and government policies.

Urging governments to refine policy now that the initial shock was over, the OECD stressed it did not want to see taxpayer support reined back.

“The aim must be to avoid premature budgetary tightening at a time when economies are still fragile,” the OECD interim economic outlook said. Ms Boone added that countries should seek to avoid “repeating the mistake of the 2010s”, when, she said, fiscal policy support had been withdrawn too quickly in the wake of the 2008 financial crisis.

Targeting support to the circumstances would be difficult because uncertainty was pervasive and most countries had a poor record in retraining workers, targeting state aid effectively and devising equitable and efficient schemes for corporate debt forgiveness, Ms Boone added.