EU restrictions on national budgets that were suspended because of the Covid-19 pandemic will not apply again until 2022 at the earliest, the EU’s economy chief has confirmed, as a resurgence in cases adds to an already very uncertain outlook.

Brussels took the unprecedented step of activating an escape clause in the bloc’s budget rules in March, effectively suspending countries’ obligations to work towards the eurozone’s debt and deficit targets.

European Commission president Ursula von der Leyen said at the time that the step was necessary to cope with “the human as well as socio-economic dimension” of the pandemic.

The rules, which were often broken, have nonetheless been part of the bedrock of the single currency since its inception, guiding discussions between Brussels and national capitals on how to mend their public finances — a process that became more structured in the wake of the eurozone sovereign debt crisis.

Valdis Dombrovskis, the executive vice-president of the European Commission who oversees financial services, told the FT that, while Brussels was planning to review the situation in the autumn, it was “relatively safe to assume” that the commission will not seek to reactivate the rules at that point “because the crisis continues, uncertainty continues”.

In practice, this meant that national governments will prepare their budgets for 2021 on the basis that the rules are still in abeyance, he added. As a result the first national budgets that could potentially fall under the rules would be those of 2022.

“Of course it’s all subject to how the real economic situation develops,” Mr Dombrovskis said. “We are still surrounded by very large uncertainty.”

The reactivation of the escape clause depends on “when the condition of severe economic downturn is not in place any more”, he said. “We will have a review of this among other things in Spring 2021.”

In July Brussels slashed its growth forecasts for the EU economy, warning that longer than anticipated coronavirus lockdowns in many countries would cause a “significantly” deeper recession this year than it had previously predicted.

The commission also lowered its forecast for a potential economic rebound in 2021, estimating growth of 5.8 per cent next year, down from a previous forecast of 6.1 per cent.

Mr Dombrovskis noted that those forecasts were based on a scenario in which there was no major resurgence of Covid-19. But since then there has been a fresh uptick of coronavirus cases in a number of EU countries including Spain, Germany and Belgium.

“The current situation is relatively uncertain . . . we will need to see how the epidemiological situation develops,” he said. 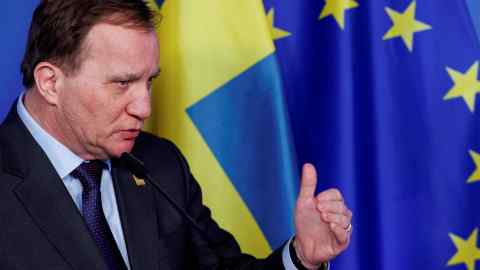 Mr Dombrovskis also noted that the EU was in process of reviewing how the budget rules are enforced — an exercise delayed by the pandemic. While the rules are based around the core requirements for budget deficits to be smaller than 3 per cent of gross domestic product and public debt to be lower than 60 per cent of GDP, these basic tenets are surrounded by an evolving web of other requirements intended to ensure sound public finances.

The European Commission’s guidebook on how to apply the rules runs to 108 pages.

Mr Dombrovskis said that a particular focal point of the review, launched in February, would be how to reduce reliance on metrics measuring the output gap between an economy’s performance and its potential, and its structural balance, a metric that tries to strip out the effects of the economic cycle when measuring a country’s deficit.

The commissioner said that there “seems to be consensus emerging” to move away from both measures on the grounds that they are overly complex, volatile and difficult to apply in a crisis.

“So there is a scope for a simplification,” he said, noting that the European Fiscal Board, a group of experts tasked with monitoring the implementation of the rules, had already recommended the changes.

Another area being studied by the commission is the introduction of a limited golden rule that would exclude some specific growth-enhancing expenditure from assessments of whether countries are respecting agreed spending limits.