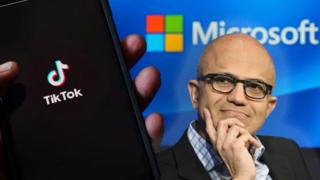 Microsoft, wasn’t invited to the party.

I thought Microsoft’s boss would be relieved that his company was safely out of the firing line.

It appears I was wrong.

What I didn’t know at the time was that Satya Nadella was in fact looking to expand deeper into social media.

In short, it would open itself up to all the criticisms and accusations that the other big social-media companies have faced in recent years.

There’s plenty of controversial stuff on the platform, too, from conspiracy theories to hateful content.

If Microsoft buys TikTok, make no mistake, it is buying a platform with a lot of politics on it.

What do you do when Donald Trump calls into question postal voting? Or someone sticks up a video recommending hydroxychloroquine? Or a user denies climate change? These are the headaches that these companies have to deal with every day.

Even though the Congressional hearing last week was about antitrust, many of the questions were to do with political interference on the companies’ social-media platforms.


These are headaches that Microsoft is currently free from. Why, then, would a company actively court them?

He thinks he can buy the American arm of TikTok, which would also include TikTok in Canada, Australia and New Zealand, at a basement price.

After all, Trump says he will ban TikTok if the company can’t find a suitor by 15 September. That puts Microsoft in a commanding negotiating position.

And because ad spend on LinkedIn is a fraction of what Facebook or YouTube rake in, it’s unlikely the purchase will get caught in anti-competition legislation.

If I were drawing a cartoon of Nadella right now, he’d have dollar signs for eyes.

And yet, there are still potential pitfalls.

The China Daily – a state-owned newspaper – described TikTok’s treatment as “theft” and said China “had plenty of ways to respond if the administration carries out its planned smash-and-grab”.

That is a problem for Microsoft because unlike some US tech giants, it has a major presence in China.

In fact, Microsoft brags on its website that: “Today, our most complete subsidiary and largest R&D centre outside the United States is in China .”

To put it bluntly, if Microsoft is seen by Beijing as having cashed in on TikTok, China has the levers it can pull to hurt it.

That would be a spectacular own goal for Microsoft – in a market that Bill Gates first got the company into in 1992.


And it gets worse.

White House trade adviser Peter Navarro was asked on Monday by CNN whether Microsoft was going to be compromised by the deal.

“Maybe Microsoft could divest its Chinese holdings,” he said.

This, then, is a perfect opportunity for the president. Remember that the deal is totally dependent on Trump’s patronage.

Nadella has said that he’s only exploring the possibility of a purchase after he got the green light from President Trump.

Trump has already said that the US taxpayer should get a cut of any deal. But what else does Trump want? That will worry Microsoft.

In fact, the more you think about it, the more it’s the case that Microsoft, by acquiring TikTok, would be acquiring its geopolitical baggage, too.

As big as Microsoft is, it’s still small enough to be a pawn in a game of chess between two global superpowers.

The question now: is that a risk Nadella is willing to take? Or will he survey the landscape and view TikTok as just too big a gamble?