For Jorge Hernández, the prospect of a cut in US unemployment pay came as a shock.

His hours at the Manhattan restaurant where he works as a chef have been slashed since the start of the coronavirus pandemic, so he has come to rely on the benefit to support his elderly relatives back home in Mexico.

Mr Hernández used to send a quarter of his salary to his parents and grandmother in Huajuapan in the highlands of Oaxaca, a poor state in south-west Mexico. More than 10 per cent of Oaxaca’s gross domestic product comes from remittances from family abroad.

“They’re going to halve my unemployment pay — I won’t be able to send as much. This will mean more poverty at home,” said Mr Hernández, aged 65.

He is not the only Mexican abroad who has continued to send money home since the pandemic began.

Remittances to Mexico have proved resilient since the start of the Covid-19 crisis, after hitting a record $36bn last year. Mexico now earns more in remittances than it does from foreign direct investment, tourism or oil exports.

In the opening weeks of the crisis in March, remittances hit a record monthly high of $4bn. And data published on Monday showed that in June, they rose 4.7 per cent month on month to $3.5bn, according to the Bank of Mexico.

As a result, total remittances in the first six months of this year reached a record $19.1bn — 10.6 per cent higher than in the same period in 2019.

The figures suggest that some US benefit cheques are finding their way to Mexican families back home.

“It’s an unusual recession in the US because average incomes haven’t fallen due to government aid,” said Carlos Serrano, chief economist at BBVA in Mexico City.

Hispanic unemployment in the US is running at more than double the pre-pandemic level, according to the Bureau of Labor Statistics, and Mr Serrano noted that about 60 per cent of Mexicans in the US had official immigration paperwork and could therefore be eligible for official aid.

And some workers’ incomes have proved resilient. About 10 per cent of Mexicans work in the agriculture sector, which largely kept going through the pandemic-related shutdowns, and another 17 per cent work in the US construction industry, which has suffered less disruption than other sectors.

Even if the US slashes unemployment benefits, “this could be the year in which remittances rise 6 to 7 per cent [from 2019],” Mr Serrano said. If benefits are not cut, the rise could be higher yet “because we’re past the worst in US unemployment”, he added. 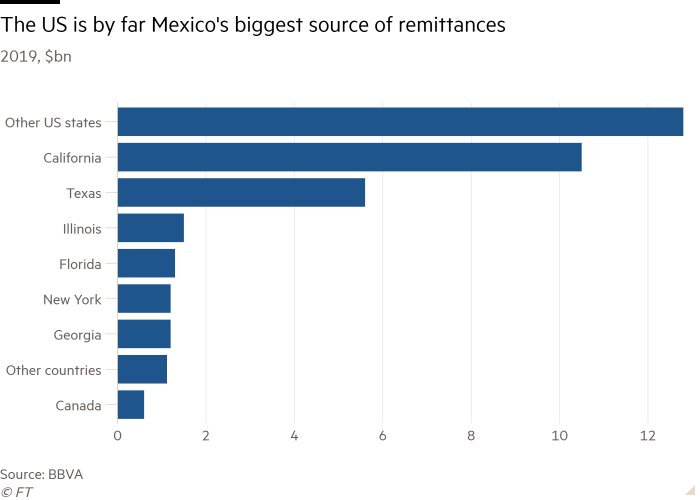 One Mexican who earns $11 an hour plus board picking peppers, cucumbers, aubergines and courgettes in Georgia, and who asked to be identified as Juan, usually sends as much as $700 home every two weeks to his father and eight-year-old son.

“A blessing” is also how Mexican president Andrés Manuel López Obrador describes his country’s migrants. He has hailed the rise in remittances as “a positive indicator”.

The pandemic is wreaking havoc on the Mexican economy, where GDP fell by more than 17 per cent quarter on quarter in the three months to June, data published last week showed. Mexico has no federal unemployment pay and Coneval, the state agency responsible for measuring poverty, found 55 per cent of workers did not earn enough to buy a basic basket of food in May, a surge from 36 per cent in the first quarter.

As a result, the number of Mexicans heading to the US is rising. Apprehensions of Mexican adults at the US border have nearly doubled since February, hitting 135,626, according to US Customs and Border Protection data compiled by the Washington Office on Latin America, a think-tank. This is the highest tally since September last year.

Things are so hard at home, our families rely on us

Adam Isacson at WOLA said that, unlike 2018 and 2019 when caravans of Central Americans arrived at the border to turn themselves in to the US authorities, migrants were now “just going and trying not to get caught” as they sought to cross between legal points of entry.

“The Mexican economy is cratering — that pushes people forward,” Mr Isacson said. “No matter who wins the [November US] election, once Covid restrictions pass, we will see a large wave of migrants . . . Democrats are dreading having a caravan situation in their first 100 days [if Joe Biden wins].”

For many undocumented and legal migrants alike, there is no better alternative to working in the US.

“I’ll keep on coming,” said Juan, whose remittance dollars sent back over the past five years are being used to revamp the family home. But for now, his main goal is to avoid Covid-19 because he would be laid off without pay for two weeks if he got sick.

“There’s no shortage of people to infect you,” he said. “And things are so hard at home, our families rely on us.”