Hello from Hong Kong, where the government has mercifully relaxed a rule that required the wearing of face masks at all times outdoors, even during physical exercise. At the height of the city’s notoriously humid summer, it was possibly healthier to avoid exercise altogether.

And welcome back to Trade Secrets after our summer break. It hasn’t exactly been a quiet summer, with EU trade commissioner “Big Phil” Hogan resigning from his post after claims he broke Ireland’s coronavirus restriction rules. We’ll bring you our thoughts on the ripple effects that his departure will send through the commission and global trade tomorrow and Thursday.

But back to masks, and our topic for today: where do all those face masks come from? Our policy watch looks at the latest developments in UK-EU trade talks, while our chart of the day highlights environmental concerns over the nickel trade in Indonesia.

In China’s most recent trade data, there was one standout performer — and you don’t need to be a doctor to guess what it was.

The country’s exports of medical equipment in the first seven months of the year were worth Rmb73.3bn ($10.7bn), compared with Rmb48.1bn over the same period last year, according to official customs data.

In July, overall exports surprised expectations to jump 7.2 per cent year on year in dollar terms, boosted not only by medical equipment but also stay-at-home products such as computers. In a peculiar twist, the same pandemic that initially ground trade to a halt now appeared to be helping the country’s export economy.

China was already the world’s biggest exporter of personal protective equipment (PPE), as it is of many other products, before the coronavirus emerged within its borders at the start of the year. As the pandemic has spread around the world, China’s export machine has shifted towards addressing skyrocketing global demand for products that might help reduce the risk of infection.

Soon after the contagion took hold outside of the country, the government promoted its vision of a so-called “health silk road”. A release from the National Development and Reform Commission at the end of March said it had provided emergency aid to 83 countries. By then, businesses were already pivoting towards medical equipment. BYD, a Chinese electric carmaker backed by Warren Buffett, said in mid-March it had become the world’s biggest maker of masks, and that it could produce 5m a day.

A natural gas facility in China run by Sinopec. The oil refiner has sought to increase its production of medical and healthcare products © Reuters

That rotation was present elsewhere, among some of the world’s largest companies. State-backed Sinopec, China’s biggest oil refiner, said on Sunday in its interim results that it had sought to increase its production of medical and healthcare products in the first half of the year.

To meet market demand for melt-blown fabric, Sinopec claimed it had also built “the world’s largest manufacturing base in a short time”. Prices of the material, a key ingredient for face masks, skyrocketed following shortages earlier this year.

The scale of China’s industrial shift towards the production of medical equipment hints at its perceived capacity to get things done quickly — the same theme present in viral videos earlier this year showing the real-time construction of hospitals in Wuhan.

Given the first wave of restrictions and lockdowns were in China, unparalleled levels of domestic demand for medical equipment — as well as the sheer scale of the manufacturing sector — paved the way for higher exports as the pandemic shifted abroad.

Ting Lu, an economist at Nomura who has closely analysed the trade data over recent months, pointed out earlier this year that exports of textile products, including masks, and medical devices fell in the first quarter of the year, but then rose dramatically in the second quarter in a trend that has subsequently continued. Overall exports only began to improve in June, after a severe contraction.

The China export story is more deeply interwoven with the coronavirus pandemic than the medical equipment data alone. While PPE exports have jumped, they are too small, in value terms, to explain China’s overall export growth in June and July. For that, Lu in July identified rising exports of computers and mobile phones.

In other words, China’s export model has been supported not only by products that directly relate to coronavirus, but also by second-order products — the so-called “stay at home” products — for which demand has increased as a result of lockdown measures. That trend, insofar as it pertains to electronics, also applies to neighbouring South Korea.

How long can the situation continue? After all that rotation, China’s production of medical equipment, at least for some products, now appears to have reached overcapacity. According to a column published last week in the Global Times, a state-run Chinese newspaper, “a number of factories are facing the risk of having to shut down”. “The bigger the demand gap, the higher the potential for profit, and the more speculative capital is pumped into the market; the greater the problems caused by scaling down overcapacity,” the author argued. And, with global demand for medical equipment likely to be here for the foreseeable future, China could face more competition for its products from overseas producers.

Moreover, while demand for Chinese exports has been supported by coronavirus, the situation may not be sustainable in the longer term, as Nomura’s Lu argued. If the pandemic continues to run, a short-term boost from coronavirus-induced demand could transition into falling overall exports as a recession takes hold. In that scenario, medical equipment might not be the only Chinese industry where capacity needs to be scaled down.

There is growing anxiety in the electric car industry over supplies of nickel from Indonesia, where companies in the world’s top producing nation are planning to dump millions of tonnes of waste into the sea, writes Henry Sanderson.

Demand for nickel, which is also used in stainless steel, is expected to increase six-fold by 2030. Analysts forecast that Indonesia will account for almost all of the growth in nickel supplies over the next decade, overwhelming output from new mines in Canada and Australia.

However, a number of Chinese-backed projects in the country plan to dump mine waste containing metals such as iron into the sea, in an area renowned for its unique coral reefs and turtles. That presents a problem for carmakers such as Tesla and Volkswagen, which have pledged to soften the environmental impact of their batteries. 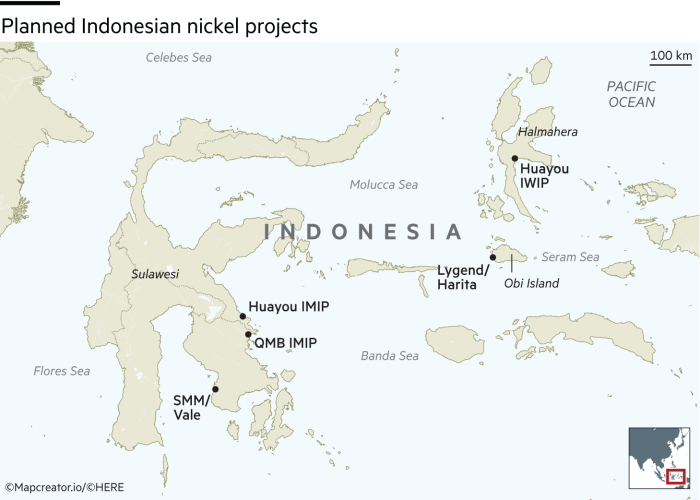 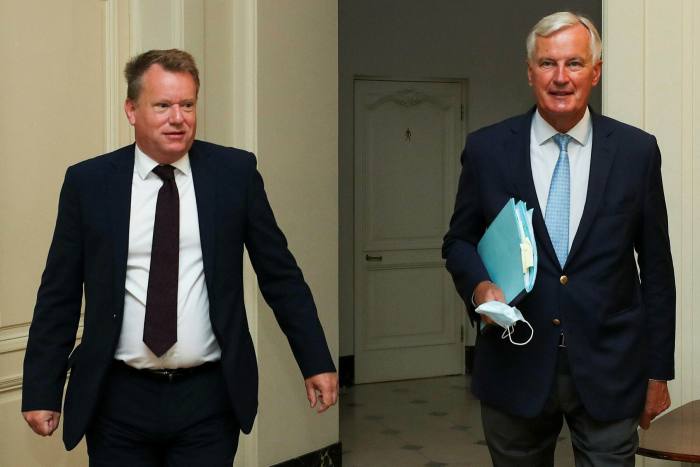 Informal talks resume this week between David Frost, the UK’s chief Brexit negotiator, and Michel Barnier, his EU counterpart, amid deepening gloom about stalled negotiations on a trade deal for the post-Brexit transition, which ends on December 31, writes George Parker.

EU officials fear that no deal will be in place before a crucial EU summit in mid-October and that talks may collapse altogether. Both sides will need to move, particularly on the issue of state aid, to achieve a breakthrough.

Meanwhile, UK prime minister Boris Johnson has been warned by former chancellor Philip Hammond that Britain risks being on “a fast track back to the misery of the 1970s” unless the government adopts clearly defined post-Brexit state-aid rules. Johnson has so far failed to say how Britain will control subsidies after the end of the transition period, arousing fears in Brussels that the UK will use state support to give companies an unfair advantage.

On Monday, Jean-Yves Le Drian, the French foreign minister, said: “Negotiations are not advancing due to the intransigent and frankly unrealistic attitude of the UK.”