After Germany’s “ka-boom”, it is France’s turn to fire the big fiscal bazooka.

Jean Castex, the new French premier, will on Thursday unveil an economic stimulus plan worth €100bn or 4 per cent of gross domestic product over two years. It is, French officials say, the biggest stimulus programme of any big European country measured against national output, separate from the emergency support measures this spring which included vast loan guarantees.

It is also the first to be announced by a big economy since EU leaders agreed a €750bn recovery fund at a marathon summit in July. France is counting on using its share of the fund — expected to be some €40bn — to cover a big part of its stimulus bill and it has shaped the package accordingly. The money will be used to improve business competitiveness, accelerate the green transition and help retrain the young and those who lost their jobs in the pandemic slump.

Germany’s stimulus plan in June marked the country’s unlikely conversion from ordoliberalism to Keynesian countercyclical policy, with a temporary cut to valued added tax and direct payments to households to boost consumer demand. In contrast, France’s stimulus package is aimed at enhancing supply. There are no tax cuts for consumers at all. This is because French households suffered a smaller decline in their household incomes during the pandemic than those elsewhere in the OECD, thanks to a generous and widely used work subsidy scheme during lockdown.

The centrepiece of France’s plan is a €20bn tax cut over two years for French companies, particularly manufacturing ones. French businesses already pay hefty corporation tax, VAT and social charges. In addition, they pay taxes on the cost of production — partly calculated according to value-added — which far exceed those paid in other European countries. According to a report by Philippe Martin, head of the prime minister’s council of economic advisers, and Hélène Paris, French companies pay production taxes worth 3.7 per cent of value-added, five times more than their German counterparts, harming their competitiveness.

President Emmanuel Macron has long wanted to ease the fiscal burden on French companies in the hope of boosting investment and job creation. The pandemic has given him the leeway to do so by blowing apart EU fiscal rules. Despite the controversies and gilets jaunes protests over his tax, labour and welfare reforms, Mr Macron is sticking to a competitiveness supply-side agenda. Now it is wrapped in the rhetoric of national protection and revival, or bringing production home.

A fiscal injection of €100bn should help to boost growth as unemployment rises and businesses go under, although much will depend on how quickly the programmes can be implemented and money disbursed. With 20 months to go before the presidential election, Mr Macron is also counting on it to flesh out his pitch to voters as the modern leader who transcends traditional left-right classification. Competitiveness and re-industrialisation will appeal to the right. A third of the stimulus package is expected to go to energy efficiency and low carbon technologies, which will please green voters (and Brussels).

Billions of euros will also be poured into apprenticeships, training schemes and hiring subsidies for the young and reskilling programmes for the unemployed, underscoring Mr Macron’s commitment to social cohesion. France is also extending its coronavirus furlough subsidy scheme but focusing it on activities still constrained by social distancing requirements, such as entertainment and hospitality, which could help avoid so-called zombie jobs in other sectors.

The French government hopes that its stimulus will by 2022 return national output to end-of-2019 levels after an expected contraction of 11 per cent this year, one of the worst slumps in the eurozone. Mr Macron is counting on it to return him to the Elysée Palace for a second term. 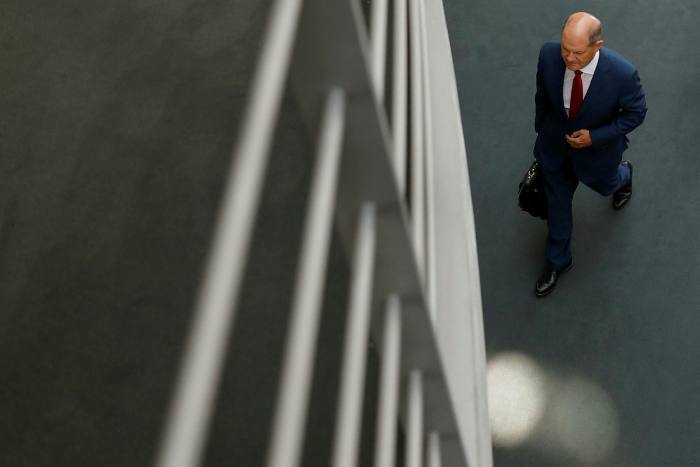 Taxing times
Olaf Scholz, the German finance minister, struck an upbeat tone about global talks aimed at an agreement on digital taxation on Wednesday, expressing hope there could be a blueprint in the autumn via talks being conducted under the auspices of the OECD. Speaking to the European parliament, Mr Scholz also stressed the need for the EU to agree on fresh revenue lines to fund the €750bn of borrowing it will conduct under the recovery plan, highlighting potential levies such as a Financial Transactions Tax.

State of the union
Ursula von der Leyen’s plans for her annual address to the European parliament are firming up following Wednesday’s seminar with her political team. According to officials, eye-catching initiatives set to be flagged in her “state of the union” speech later this month include a policy package on migration (initially planned for early 2020), proposals defining a 2030 climate target, an action plan to counter racism and a policy paper on how to make sure governments do not squander the EU’s post-Covid recovery and resilience fund.

Coming up on Thursday