The world’s largest computer maker Lenovo reported strong sales and profit growth for the second quarter, gaining US market share even as the threat of sanctions on Chinese companies operating in the country grows.

While many others including ByteDance, Tencent and Huawei have fallen foul of escalating restrictions from Washington, Lenovo is a rare success story in the US, maintaining its business in the country while equipping the world for the work-from-home era.

The group grew its US laptop and desktop computer market share to 16 per cent in the first half of the year, trailing only HP and Dell, according to IDC. Customers including the US Air Force bought its laptops to help staff work from home.

Unlike Huawei, which has seen its international business crippled by a years-long campaign by Washington, Lenovo’s international sales are more important to the company than ever, bringing in 79 per cent of revenue in its last fiscal year.

But risks loom as the US election approaches and the Trump administration targets everything China-related, from lip-syncing apps to online messaging platforms. So far the Hong Kong-listed company, in which the Chinese government holds a stake, has stayed on the right side of US-China relations.

“Whenever China-US relations are bad, we’re asked about this,” said chief executive Yang Yuanqing. “We’re a completely globalised company . . . we have no reason to worry about these types of actions.”

But with tensions spiralling, some close to the company are worried. One person said Lenovo fears it may be targeted by the US as the “next Huawei”.

The person noted that its dual headquarters in Beijing and North Carolina could offer it some protection. A former marketing manager at the company said they always emphasised the dual global headquarters and “Americanness of our products”, even though he said most of the product development and engineering was done in China.

Lenovo has encountered years of suspicion in Washington, starting back in 2004 when the Chinese government held a much larger stake in the company and it acquired IBM’s PC division.

Some federal agencies have banned buying of its products, while others like the US Department of Defense and state and local governments continue to make purchases. 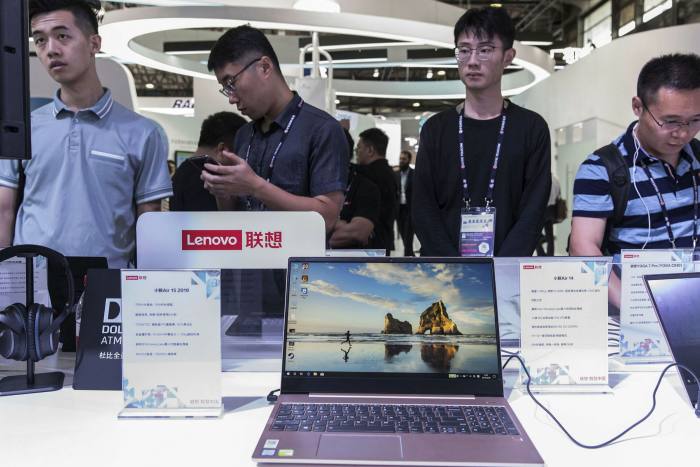 Last year the Pentagon’s inspector general said Lenovo’s computers had known “cyber security risks” and disclosed $2m of purchases by the Army and Air Force in 2018, warning the department to take action.

Nevertheless, as the coronavirus lockdowns hit the US this year, the Air Force bought Lenovo laptops. One Air Force purchasing memo counts Lenovo devices among its “COVID-19 approved products” and a federal procurement database shows about $400,000 worth of purchases this spring and summer.

A spokesperson for the defence department said it had a robust programme to manage IT supply chain risk.

Lenovo’s efforts to hire non-Chinese executives for leadership positions have helped it navigate the global market. Italian Gianfranco Lanci ran its PC business for many years and is now its chief operating officer, while Kirk Skaugen runs its data centre business from North Carolina, where a slew of other executives are based.

The set-up has drawbacks, however, with one former Chinese executive complaining that foreign executives held too much sway. “With all the foreigners involved in decision-making, we moved too slowly and made the wrong choices,” he said of the company’s struggling China smartphone business.

Growing nationalism at home has also added to the company’s difficulties. Some netizens suspicious of its US ties call it “the conscience of the American empire” — a play on words of its Chinese name.

Mr Yang said Chinese people should be proud to have more multinationals. “I believe as Chinese society becomes more mature, everyone will look at this issue more rationally,” he said.