Boris Johnson started the week claiming his plan to break international law over Brexit was a technical issue of little consequence. Downing Street said it was “limited and reasonable” while ministers talked about “tying up loose ends”.

But by the end of the week he had succeeded in uniting Brussels, former Conservative party leaders, US politicians and even leading Tory Eurosceptics in condemnation; negotiations on a UK-EU trade deal were hanging in the balance.

Mr Johnson now faces problems on multiple fronts, starting with the ultimatum laid down by Brussels on Thursday that he must scrap the contentious parts of his UK internal market bill relating to Northern Ireland by the end of September.

Michael Gove, Cabinet Office minister, insisted he would not scrap the bill, but now faces a House of Commons confrontation with Tory MPs on Monday when the bill — which overrides parts of the Brexit treaty — receives its second reading.

I think the government will have to think again. I don’t think this is going to get through the Lords in its present form

Even Nancy Pelosi, Democratic Speaker of the US House of Representatives, criticised the measure, warning there was “absolutely no chance” of a UK-US trade deal passing Congress should Mr Johnson renege on his Northern Ireland treaty, citing concerns about the Good Friday peace agreement.

Theresa May and John Major, former Tory prime ministers, have warned that if Britain breaks international law, its standing in the world would be tarnished, but criticism on Thursday from Michael Howard, the staunchly Eurosceptic former Conservative leader, could sting even more.

Lord Howard warned of “the damage done to our reputation for probity and respect for the rule of law” by the admission by Brandon Lewis, Northern Ireland secretary, that the government intended to break international law.

One Tory pro-Brexit backbencher said: “It’s going to be very hairy next week. I’ve not spoken to anyone who is happy about it.” He thought Lord Howard’s intervention could help to swell the rebellion to as many as 20 Tory MPs next week.

While Mr Johnson’s bill could survive such a rebellion — he has a majority of nearly 80 — it would embolden his enemies in the House of Lords to try to delay the measure, citing its constitutional significance.

“I think the government will have to think again,” said Norman Lamont, the pro-Brexit former Tory chancellor, now a peer. “I don’t think this is going to get through the Lords in its present form.”

Tory MPs marvel at how Mr Johnson got himself into this situation. After weeks of trying to blame an intransigent Brussels for the impasse in trade talks, Downing Street now faces claims that it is the partner acting in bad faith.

Number 10 says the legislation is a “safety net” to defend the interests of Northern Ireland in the event that the EU and UK fail to agree on details relating to future trade between the region and the rest of the UK.

But those talks, led by Mr Gove and European Commission vice-president Maros Sefcovic in a special joint committee set up to oversee the implementation of the withdrawal agreement, had been quietly making progress for months in what officials described as a “cordial” atmosphere.

Senior officials say the mood in Downing Street over Northern Ireland hardened over the summer, as Mr Johnson appeared to become more aware of the implications for the Union of the trade border he had created in the Irish Sea as part of his 2019 Brexit deal.

In August Mr Johnson went to Northern Ireland and declared that he would see a border in the Irish Sea “over my dead body”. David Frost, the UK’s chief Brexit negotiator, frustrated by a lack of progress in talks with Brussels advised the prime minister to up the ante.

The UK internal market bill gives ministers the powers to interpret the Northern Ireland protocol in key areas, including on customs procedures and state aid rules in the region, regardless of whether the EU agrees.

Downing Street said it hopes an agreement can still be reached in the joint committee. But the legislation implies that Britain will do what it likes if Mr Gove and Mr Sefcovic cannot agree in the coming weeks.

Lord Frost, according to British officials, convinced Mr Johnson that other EU countries might be frustrated by this hardball approach but that they would not explode or pull the plug on talks. Ministers, distracted by coronavirus and economic problems, did little to challenge this idea. 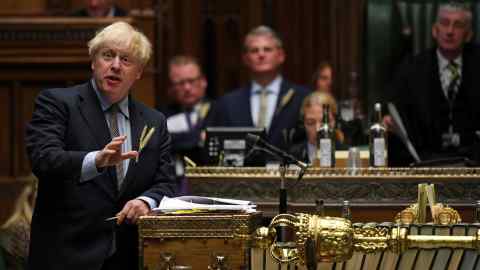 There was barely any dissent from ministers when the plan was nailed down last Thursday — allies of chancellor Rishi Sunak and Mr Gove say the senior ministers went along with it at a meeting of the XS Brexit strategy committee.

When the Financial Times revealed details of the plan on Sunday, the response from the EU was initially muted. But that changed on Tuesday when Jonathan Jones, head of the UK government’s legal department, resigned in protest.

Mr Lewis’s admission to MPs later that day that Britain intended to commit a “limited” breach of international law turned the issue into a major confrontation with the EU.

The legal manoeuvre by Mr Johnson seemed so provocative that some opposition MPs have claimed it is proof that the prime minister wanted to blow up the EU-UK trade talks, which remain logjammed following the conclusion of the eighth round in London on Thursday afternoon.

But Mr Johnson’s allies insist he remains committed to a deal and that the row over the internal market bill was “not seen by us as negotiating tactic”. Downing Street said: “We remain committed to seeking a deal.”

Senior Tory officials are working to see if the internal market bill can be amended — including making it clear that the provisions will only apply in the event of the failure to secure a trade deal with the EU when the Brexit transition expires on December 31. However, that is unlikely to satisfy Brussels. There is no obvious route out of the impasse.

One said: “This might have been conceived as a big stick to wave at the EU, but it doesn’t look so big if it’s being hacked away in parliament by your own side.” Lord Lamont summed up the widely held Tory view: “I think the government are in a terrible mess and in a hole and I don’t think it is easy to justify.”