Hello from Brussels. If you think you’ve got a tough week, just think of the gruelling ordeal ahead for the ambassadors at the World Trade Organization’s General Council in Geneva. The contenders for director-general make their presentations this week. Eight candidates, 90 minutes each: 12 solid hours of listening to applicants insisting that they — THEY — are the ones to bring the WTO together, have the American lion lie down with the Chinese lamb (or vice-versa) etc.

Since the contenders appear in the order they were nominated, the final candidate to be heard, on Friday, is Britain’s Liam Fox, who last week got his nomination papers in with about 15 minutes to spare. We’ll do a wrap-up a week from today on what we’ve learned. Today’s main piece is on Joe Biden’s plans for supply chains and strategic independence, which aren’t exactly a paean to free trade but will give a bit of relief to the likes of the EU and Japan, if not China. Our Tit for tat guest is Kemal Dervis, senior fellow at Brookings and former head of the UN Development Programme. Our chart of the day looks at the slump in European exports.

Any lingering hopes among the likes of the EU and Japan that a Joe Biden administration would recall the (relatively) halcyon (sort of) free-trading days of the (somewhat) multilateralist Obama White House should be dispelled by his campaign’s policy pronouncements last week.

A report by the “Biden-Sanders unity task force” aiming to synthesise the views of Joe and Bernie was followed by two Biden campaign statements, one on supply chains and the other on boosting US industry and technology.

The Biden-Sanders paper is unremarkable Dem stuff. It wants binding and enforceable labour, human rights and environmental standards in preferential trade agreements. The campaign statements are much more radical and have a common theme: boo to big bad China.

The supply chains programme goes beyond stockpiling PPE for pandemics to a comprehensive pledge to build domestic industrial capacity in the following: “energy and grid resilience technologies, semiconductors, key electronics and related technologies, telecommunications infrastructure, and key raw materials”. This will include using a range of procurement instruments — not just the obvious crisis-related Defense Production Act but also the big federal pharmaceutical purchasers including Medicare and Medicaid — to source domestically. And where necessary, the US will use “targeted restrictions on imports from nations such as China and Russia that pose national security threats”. So, look forward to a bunch more Section 232s.

The industrial policy one goes even further, envisaging a major expansion of federal intervention. It wants much broader Buy American procurement rules, strongly supports the Jones Act restrictions on foreign shipping and demands that technology developed in the US should be manufactured there.

The instinctively multilateralist trade policy of Bill Clinton, or even the more qualified one of Barack Obama, this is not. Nor is it a good idea in itself. Buy American and the Jones Act are the way to go if you want infrastructure built and goods transported slowly and expensively, enriching a lot of lawyers along the way.

The plans also have bad news for the US’s friendly trading partners such as the EU and Japan, for example if they mean gutting WTO and bilateral deals on government procurement (also for American companies reciprocally cut out of tenders abroad as a result, come to that).

So, a counsel of despair for Tokyo and Brussels? Whomever you vote for, the protectionists always get in? Not entirely. Biden’s trying to outflank Trump on hostility to China. Democrat attack ads portraying Trump as soft on Beijing in general and on trade in particular are quite something. In Washington, China has become, as political types say, a valence rather than a position issue. Few mainstream US politicians now argue for constructive engagement with Beijing: they battle to appear more authentically Sinosceptic.

But unlike Trump, Biden isn’t obsessed with the overall trade deficit, or with going it alone. He’s not sounding off at the EU on the basis of lobster-related ignorance about trade deals and tariffs. The two above-mentioned campaign policy statements contain 41 references to China. But they mention “deficit” exactly once, and only in the context of trade in pharmaceuticals. And, encouragingly for the EU and Japan, they also talk about “allies” 17 times.

Biden says he wants to work with said allies on building supply chains that don’t rely on China, and on increasing resilience to future shocks. This tallies with the sense we get from listening to trade veterans on the Democratic side. They note Biden’s background is in foreign policy, not economics. He’s strategic on trade rather than either a convinced America-first-last-and-always protectionist or a principled free-trader.

While this is unremittingly bad news for China — assuming the plans get implemented — if you’re the EU or Japan there’s probably something you can work with. They’ll need to be careful not to enter a full-blooded anti-China campaign, given their own trade and investment interests there. But you might envisage joint projects with the US on sharing technology or managing supplies of raw materials. And although the statements don’t mention the WTO, you can imagine Biden edging back towards multilateralist co-operation if he thinks it can be used to constrain Beijing.

The US isn’t going back to the multilateralist days of Clinton (Bill, that is) for a long time, maybe never. But as a lot of people are going to be saying in a lot of contexts, Biden’s plans aren’t as terrible as Trump’s. And that’s some cause for grudging relief in Brussels and Tokyo.

Christine Lagarde, European Central Bank president, last week told the Financial Times that export-dependent nations would have to “revisit” their business models because of the lasting impact of the pandemic on global trade — an argument backed up by recent data, writes Valentina Romei. Exports rebounded month on month in May but remain well below pre-virus levels. In Germany and France, the value of goods exported in May was between 35 and 40 per cent below the same month last year. 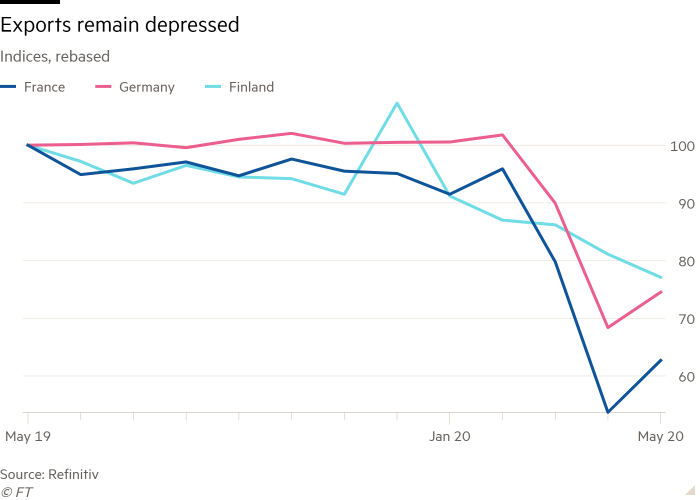 Are fears that the pandemic will lead to deglobalisation overblown?

Technological change reducing transport costs and easing communications has continuously been a driver increasing globalisation. What really interrupted or limited it were wars and geopolitical events. I believe, therefore, that the extent and form of deglobalisation will again depend crucially on geopolitics rather than the immediate disruptions due to the temporary breakdown of some global supply chains. A world politically divided into large spheres of influence, with an ascending China and the still very powerful US as two fiercely competing poles, could be a much less integrated world than the pre-pandemic one.

How should the EU go about linking its environmental and trade policy?

The key problem with the EU’s proposed border carbon taxes is that it is a unilateral move that is not consistent with the approach adopted in the Paris agreement, where countries determine their climate mitigation goals nationally and where, in particular, it is understood that developing countries will have less ambitious goals with presumably less immediate costs. It is doubtful that the EU can mobilise sufficient resources to compensate affected developing countries if the scheme is applied too quickly and to too many products, leading to strong political tensions and frustrating the global multilateral spirit of climate negotiations. The best approach for the EU to further global climate goals is to move carefully with the proposed border taxes and to try to embed a gradual convergence of carbon prices implicit in different countries’ policies in multilateral accords. Whether this will be possible will crucially depend on the outcome of the US elections.

What would you like to see a new WTO director-general prioritise?

The role of the WTO in the near future will again very much depend on the outcome of the American elections. If Trump remains president, the DG would have to prioritise making plurilateralism, in which a limited number of like-minded countries pursue trade agreements, work as well as possible and encourage these agreements to be compatible with WTO rules and be open for others to join at a later stage. With Biden as president, making plurilateralism work would still be important but the immediate priority could become to make the WTO’s dispute resolution function again.

Another set of broad issues relates to industrial policies, technology and security. Trade tensions are increasingly due to industrial and technology policies, often rightly or wrongly connected to security concerns. The WTO will either become marginalised or, on the contrary, it could become the central organisation helping to find the appropriate distinction between nations promoting domestic innovation, research and development, and social goals, utilising various policies that can be considered part of their legitimate sovereign policy space, and beggar-thy-neighbour policies imposing direct costs on others that are bound to lead to cycles of retaliation and end up harming all.