The FBI have conducted a raid on the Los Angeles-area home of YouTube star Jake Paul.

A spokeswoman for the FBI said an armed swat team carried out the raid, which took place while Paul was not at home.

The official would not say the reason, only that the search was related to an investigation. Officers were seen collecting guns from the property.

Paul is facing charges of looting in Arizona and recently held a party that allegedly broke public health orders.

“The FBI is executing a federal search warrant at a residence in Calabasas in connection with an ongoing investigation,” an FBI representative said in a statement.

“The affidavit in support of the search warrant has been sealed by a judge and I am, therefore, prohibited from commenting as to the nature of the investigation. No arrests are planned.”

Aerial footage from news outlets showed what looked like firearms being removed from the home by investigators.

According to the local ABC station, these weapons included a long gun that was next to a hot tub in the garden.

In June, Paul was arrested in Scottsdale, Arizona, during a protest at a shopping centre following the death of George Floyd. Police declared the demonstration a riot after looting started.

He was charged with criminal trespass and unlawful assembly, but told US media that he was only there to meet protesters.

In July, he was criticised for holding a day-long party at his Calabasas home, where revellers did not wear face masks or social distance.

Who is Jake Paul?

His online fame helped to secure him a role on Disney Channel series Bizaardvark. However he was fired after complaints from neighbours about his stunts – including starting a fire in his back garden – gained publicity. 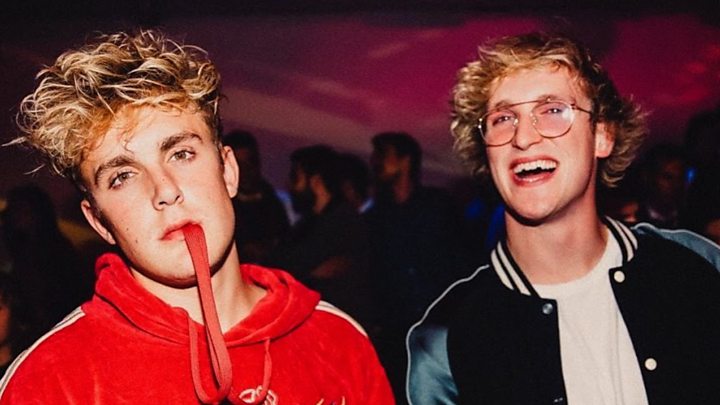 Paul, like his brother Logan, is a controversial figure in the so-called influencer industry. In 2018 he uploaded a video titled “I lost my virginity,” featuring a thumbnail picture of him posing semi-nude with his girlfriend.

He has also staged two weddings, taken part in a boxing match against fellow YouTuber AnEsonGib, and released several songs, including one with rapper Gucci Mane.

Earlier this year Paul was criticised for suggesting that anxiety is a self-induced mental illness. In a subsequent tweet, he said he had also suffered from anxiety and intended to “[spread] more awareness”.