In the southern Italian town of Avellino, Salvatore Amitrano has been rushing to dispatch a backlog of deliveries since the country emerged from its strict coronavirus lockdown.

Mr Amitrano and his two brothers run a multinational business producing components for household appliances with annual revenues of about €25m.

His company Pasell Group, which has plants in Italy, Turkey, Slovakia and Poland, registered year-on-year sales drops of up to 50 per cent in March, April and May as Rome imposed some of the most stringent antivirus measures so far seen in a western democracy.

Italy was the first European country to be hit hard by the virus, and has recorded more than 35,000 deaths since the outbreak began in February. As a result of the lockdown, Mr Amitrano braced himself for a 30 per cent annual drop in sales over the course of this year.

But since lockdown measures began to lift in May, his business has rebounded strongly and he now expects to end the year with sales just 15 per cent below last year’s levels.

“The post-Covid numbers are so much better than expected,” Mr Amitrano said. “Despite the catastrophic effects of the pandemic, we are registering a surprising production growth in this phase.”

Mr Amitrano is not the only one whose business is exceeding expectations.

Italy’s second-quarter gross domestic product shrank by 12.4 per cent quarter on quarter in the three months to June — a record contraction, but better than economists had forecast, and in stark contrast to the other big southern European economy, Spain, which recorded a contraction of 18.5 per cent. Italy also outperformed France, where second-quarter GDP shrank by 13.8 per cent.

In June the eurozone’s third-largest economy posted a month-on-month increase in industrial output of 8.2 per cent, seasonally adjusted data showed, outperforming the expectations of economists polled by Reuters who had forecast a rise of 5.1 per cent. This followed a record 41.6 per cent increase in the previous month, after lockdown ended.

Fabiano Schivardi, an economist at LUISS University in Rome, said the swift start of the rebound was in part thanks to the government’s steps to help businesses navigate the pandemic, “such as grants, cheap loans and measures to support employment and to extend temporary lay-off schemes”. Moreover the private sector had entered recession in a better condition than previous downturns “because on the one hand the most fragile companies had already gone and (also) those left have strengthened from the point of view of capital in recent years and have very broad shoulders now”, Mr Schivardi added.

He also credited efforts by Brussels, which “has been decisive in making the economic climate positive and more stable with the (creation of the) recovery fund and the (role of the) European Stability Mechanism”.

Recent sentiment surveys suggest the early signs of recovery are continuing in the third quarter of this year. The IHS Markit purchasing managers’ index for Italian manufacturing rose to 51.9 in July, from 47.5 in June, its first expansion in almost two years, although foreign demand remained weak and there was evidence to suggest factories were not operating at full capacity.

“These improvements are to be seen in a positive light, even though in previous months we’ve dropped to such low levels of activity that even with small increases in demand, in percentage terms these increases look enormous,” said Massimo Rodà, a senior economist at Confindustria. However economists fear a fresh uptick in infections this autumn could undermine Italy’s economic recovery. The daily tally of new cases has begun to accelerate over the past month, although less steeply than in several other European countries.

“Italy has certainly worked well in containing the spread of the virus so far, but these (economic) improvements depend mainly on an increase in domestic demand right after the lockdown,” said Mr Rodà.

And Paola Profeta, an economist at Bocconi University in Milan, highlighted the uneven nature of the virus’s economic impact.

“The aggregate figure does not take into account that the most affected are the weaker social categories, such as less educated workers and women,” she said. “It will be essential to protect these groups in the coming months. Women’s employment is already under 50 per cent in Italy; falling further below these levels would mean a loss, not only from a social point of view, but also in terms of GDP.”

Italy also entered the pandemic with a decade of economic underperformance behind it; unlike other eurozone nations, its economy has hardly grown in the past decade. 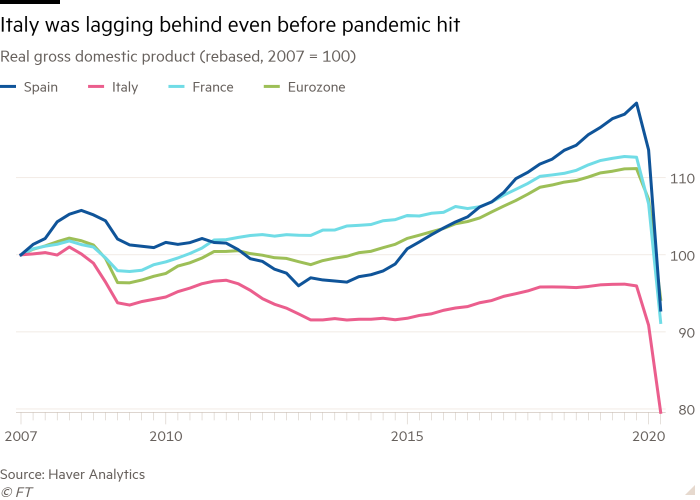 A longer-term recovery would require Italy’s exports to bounce back — and that depended not just on the spread of the disease at home, but around the world, Mr Rodà warned: “The virus is still slowly covering as a wave different parts of the globe and different commercial partners of Italy. This will have more repercussions on Italian exports in the coming months.”

Meanwhile in Avellino, Mr Amitrano says the early signs of recovery are “encouraging”.

“I am not sure we can call this a permanent rebound, but if we keep the pace we expect to be back to the pre-Covid-19 (sales) volumes by the end of 2020,” he said.

He credited the government’s furlough and income support policies for helping him avoid lay-offs so far, meaning “we have been able to guarantee a continuity of production and not to disperse human capital”.

But, he added, the autumn would prove crucial in the future health of his business: “The big game will be played in September, when it will be time to replenish the order book.”