Economists bicker over the extent to which mass stimulus will unleash inflation. The more pertinent question is: how will we know?

Inflation indices are imperfect metrics at the best of times. The components — a representative basket of goods used to measure price movements — are reshuffled on an annual basis at best. Japan waits for five years. That nation of pet lovers only added cat litter in 2015. In Britain, ubiquitous reusable water bottles only made it into the index a few months ago.

Coronavirus has upended those baskets. Britain added airport parking to its 2020 CPI measure of prices published on March 25, by which time few people were flying anywhere. The restaurants and hotels that command a 9.6 per cent weighting were equally empty. Instead, housebound citizens were baking bread and eating in, resulting in a super-sizing of groceries’ 24 per cent share.

Academics and think-tanks have taken stabs at creating more realistic baskets. Alberto Cavallo in a paper for US think-tank National Bureau of Economic Research uses publicly available credit and debit card-based expenditure data to establish lockdown spending habits. This implies a halving of the weighting given to both transport and recreation. Food consumed at home gets a lift of half as much again. Using this basket in April would give an inflation rate of 1.06 per cent, three times the official US CPI rate of 0.35 per cent.

Compiling indices is onerous. In the UK, it entails collecting 180,000 price quotations every month covering 720 items and services in 140 locations. Doing so online during lockdown may have underplayed the role of offline-only corner stores with higher price tags. It also misses subtleties such as two-for-one offers largely curtailed during lockdown. 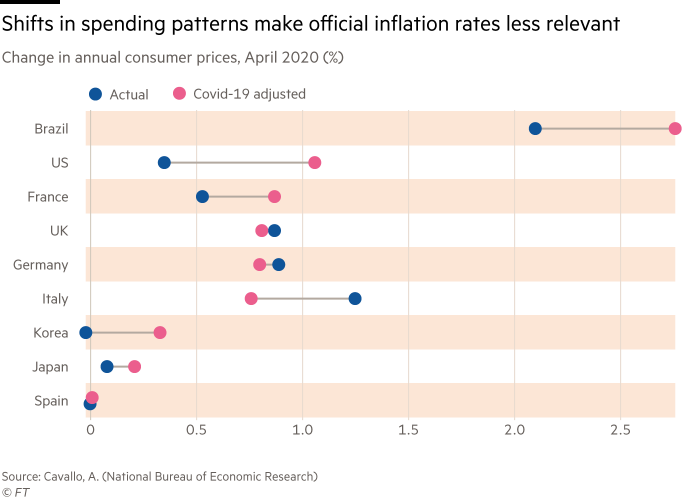 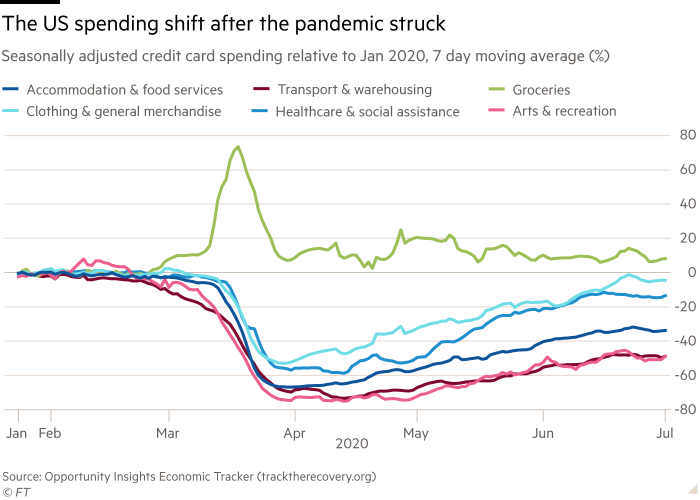 Central banks, including the Bank of England and Bank of Canada, acknowledge the issue. Europe advises imputation, carrying forward the last used price. Yet newly reopened salons are taking advantage of pent-up demand to charge more for a haircut than they did in January.

Given the prevalence of inflation as a benchmark for everything from monetary policy to wage negotiations, taxes and benefits, it is worth redoing the sums.

If you are a subscriber and would like to receive alerts when Lex articles are published, just click the button “Add to myFT”, which appears at the top of this page above the headline.