Here’s a v-shaped recovery for you. Growth in broad money in the UK is now surging at levels last seen in 1528, according to Jefferies:

It’s a similar story across advanced economies. Chart via Jérôme Jean Haegeli, of insurer Swiss Re: 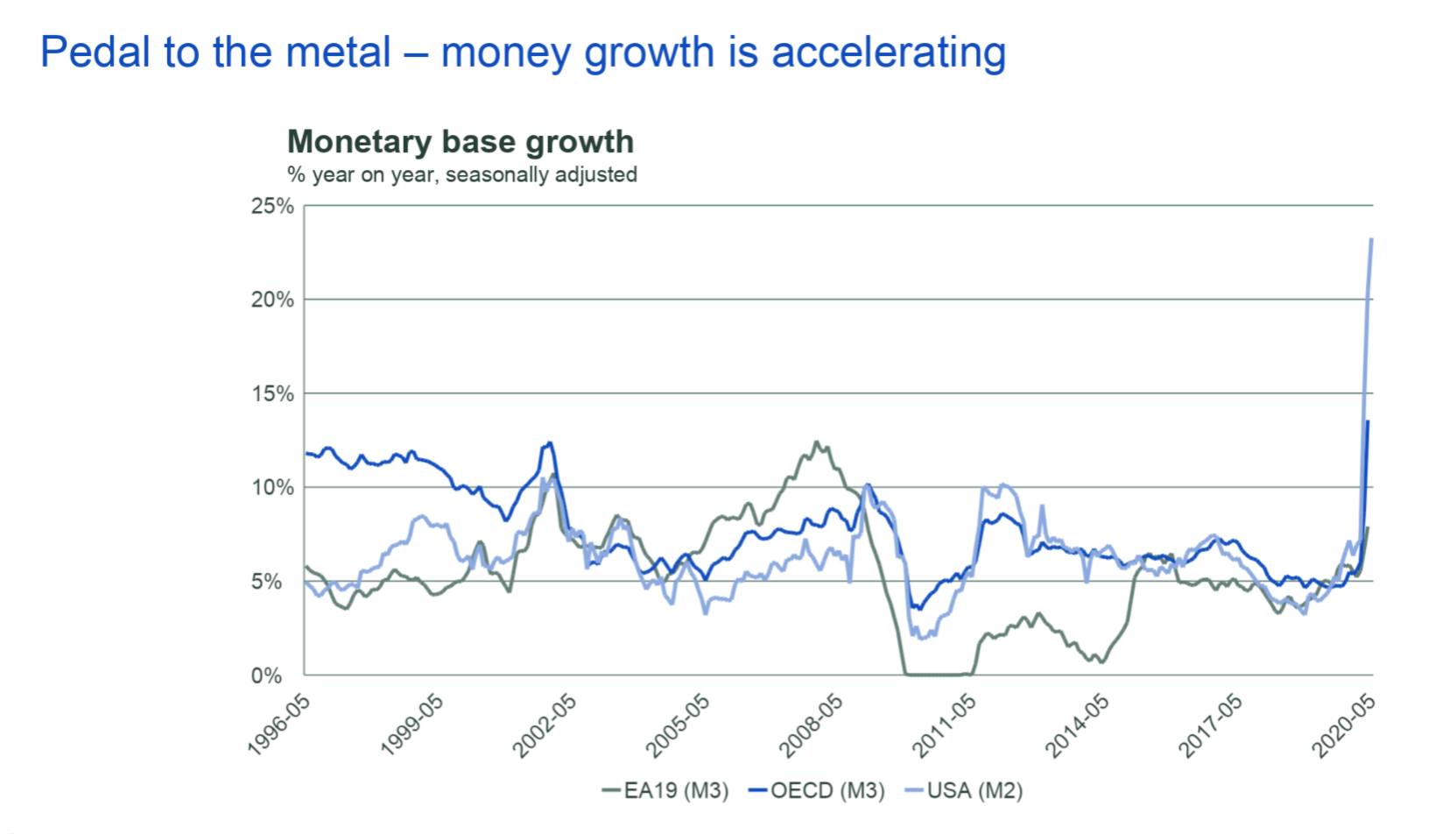 But what does this mean? The most obvious interpretation would be to say that inflation is coming. Yet history suggests a more complex relationship between money and prices.

Back in the 1970s and 1980s, central bankers in the UK and elsewhere used to keep a close eye on broad money aggregates as a harbinger of what was likely to happen to prices. The prevailing view was that inflation, as Milton Friedman put it, was “always and everywhere a monetary phenomenon”.

The Bank of England even applied what it saucily named the “corset” to the UK’s money supply, aiming to constrain it in a bid to lower inflation, which at that time was in the double digits, alongside a range of other demand-side measures aimed at staving off rapid growth in the aggregates. The policies, however, were not a success.

The failure was so bad that it provoked/inspired part-time sheep farmer and full-time central banking legend Charles Goodhart to pen Goodhart’s Law, which states that statistical regularities wtend to collapse once you try to control them. The point here being that in trying to control money in order to control inflation, policymakers had unwittingly tampered with the historical relationship that existed between the two variables. A certain level of growth in the money supply that might have signified something about inflation in the past ceased to do so once you imposed policies aimed at targeting that level.

And while the aggregates clearly said something about what was happening in the economy, the message was hardly loud and clear.

In the intervening years looking at aggregates fell out of fashion, with policymakers preferring to focus their energies on controlling market and public expectations of what would happen to prices through the adoption of inflation goals. While there was something of a renaissance in money supply targets in the years after the financial crisis, inflation has been so weak for so long that broad money measures are still largely ignored.

In the past couple of weeks, however, economists have started to pick up on rampant growth in the money supply, with the focus being on what it means for inflation.

While the relationship is far from exact, there is some correlation between broad money growth and inflation. Again, via, Jefferies: 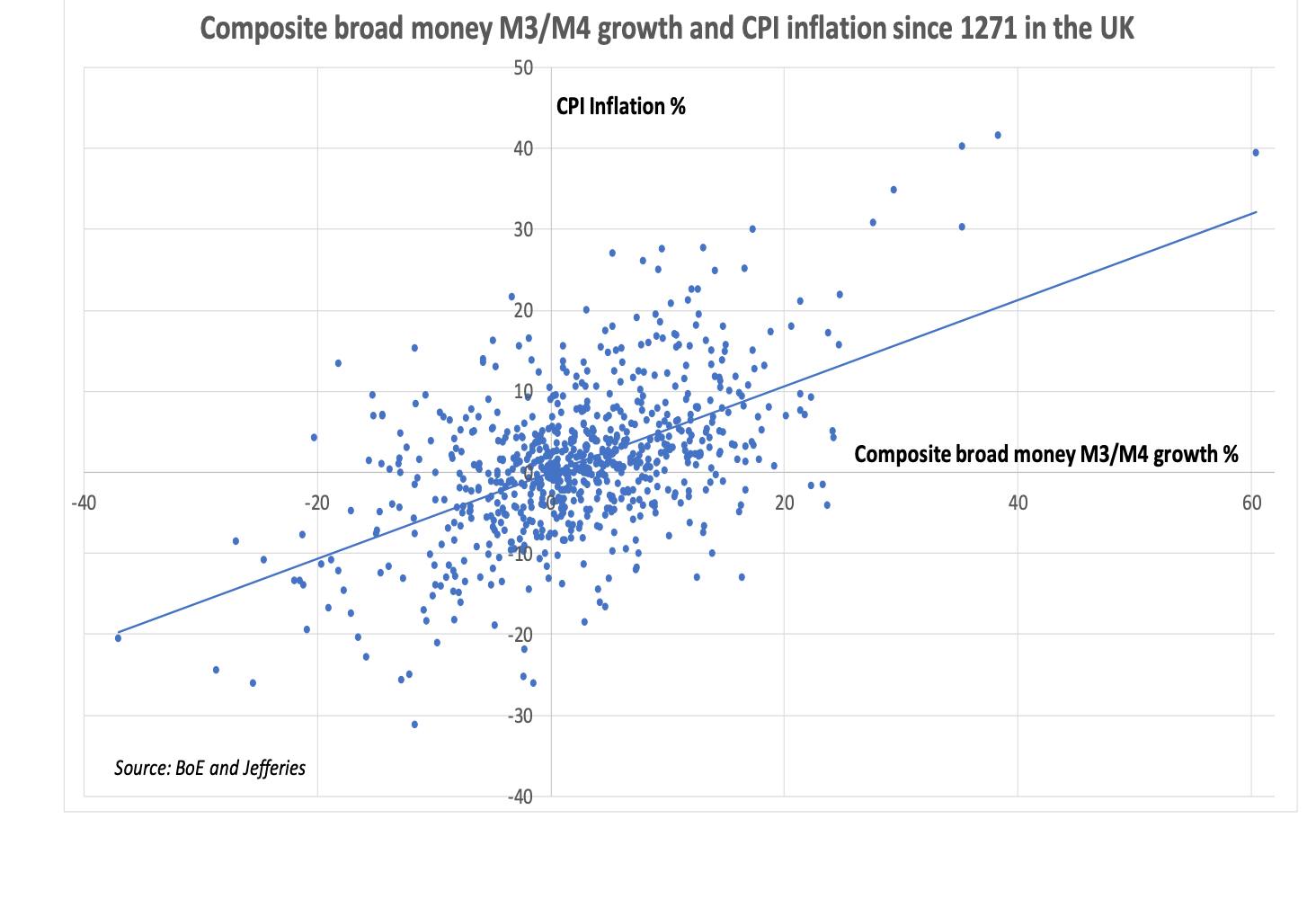 How tight will the relationship prove this time around? We think what matters more than the initial surge in broad money, is whether or not it is sustained. The rampant growth is a direct consequence of central banks’ and governments’ responses to the pandemic.

Commerzbank’s Jörg Krämer, for instance, puts almost all of the rise in the eurozone down to the higher budget deficits of member states. “Growth in credit to the general government rose to 9.8 per cent in May,” Kraemer says, adding that this feeds through into the money supply numbers through purchases of sovereign debt by the European Central Bank.

But if policies fail to have the desired effect on broader economic sentiment, money supply growth will almost certainly crash spectacularly. David Owen of Jefferies warns that to avoid a repeat of 1704 and 1705 – when money supply soared, then crashed – banks must not respond to rising defaults, business failures and rising unemployment by cutting lines of credit.

Others think that’s unlikely at a time when banks’ remain in decent shape. Here’s Haegeli:

We have never had so much liquidity pumped in the system…Unlike the 2007/08 financial crisis, the banking system doesn’t need to be repaired, meaning money creating is getting multiplied easier and can chase asset and good prices. Make no mistake: inflation is not dead.

We’d agree with much of that. Though we’d argue that it misses another important point.

The prime reason why quantitative easing and other elements of central banks’ responses to the global financial crisis have failed to boost either broader measures of money growth, or inflation, is that they have failed to result in higher incomes for most people – especially the lower paid. Conversely, many pinned much of the blame for the inflation of the 1970s on high wage growth.

As this excellent read in Tuesday’s paper notes, in demographic terms, warehouse workers in the US are essentially today’s manufacturers – with the industry becoming the employers of many of the school leavers who 50 years ago would have gone to work in factories. Yet today those warehouse workers are paid the same wage as manufacturers were more than 20 years ago, in 1998.

It’s hard to see how a generalised wave of inflation can take off when wage growth among lower paid workers is so weak – and employment so precarious.

Copyright The Financial Times Limited 2020. All rights reserved. You may share using our article tools. Please don’t cut articles from FT.com and redistribute by email or post to the web.