Huawei employees are becoming increasingly worried about lay-offs after the US announced tougher sanctions that some analysts have called a “death sentence” for the Chinese telecoms equipment group.

Staff described a “state of war” in the company, with the new restrictions threatening to cut off the supply of semiconductors Huawei needs to power its 5G telecoms, smartphone and other businesses.

“Our company has been urging us to get used to this state of war,” said an employee in the company’s research and development department. “But we’re still worried. Will our benefits be sacrificed, will the lay-offs finally land on me?”

If all microchips . . . were restricted on August 17, what products can we still make?

The tougher US sanctions, which were announced this week, were designed to close any loopholes in previous restrictions imposed by Washington as it cracks down on Huawei and other Chinese technology groups.

The new rules will ban the sale without a licence of any chips made using US technology in transactions that involve Huawei. The changes threaten a near blanket ban on the supply of chips to the Chinese company given the prevalence of US technology in the semiconductor industry, analysts say.

“The people who were extremely concerned have already left,” the employee in research and development said, referring to colleagues departing the company. Another engineer said he no longer needed to work overtime, which was “unsettling”.

“If all microchips, whether they be advanced, middling or lagging, were restricted on August 17, what products can we still make?” asked another employee on a Huawei message board.

Employees and analysts said the ban could end Huawei’s main smartphone and 5G equipment businesses and affect other units, such as cloud computing, gaming and virtual reality.

Staff said transfers to other departments, departures and lay-offs were mounting as Huawei retrenched after years of global growth. The company has refocused on its home market, where its smartphone sales are booming and demand for its telecoms products are high amid a 5G rollout.

The company’s growth slowed to 13 per cent year on year in the first half of 2020.

Redundancies and transfers were particularly high in Huawei’s global marketing team, with several executives departing, employees said. The company earned 65 per cent of its revenue overseas in 2013, compared with 41 per cent last year.

“More and more staff are returning from overseas. Before, employees would line up to apply for overseas assignments but now it’s being re-examined,” said an employee in Huawei’s human resources department. The employee added the postings were fewer and applicants were worried about the intensifying international tensions. 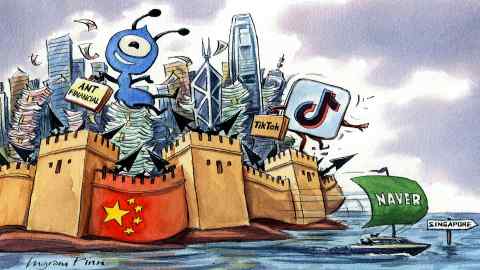 Huawei’s annual sales were $123bn last year. The company is a large employer in Shenzhen, the southern Chinese technology hub. It is also one of China’s premier research groups, with about half of its 194,000 employees engaged in research and development.

“Lots of people have left, top people,” said a HiSilicon team member. Multiple employees in the unit said management had taken to emphasising secrecy. “If you’re too high-profile, it’s easy to be sanctioned by the US,” the employee said.

Huawei declined to comment on the latest US sanctions.

Not all employees interviewed by the FT were worried about the sanctions. Some said staff had become used to Washington’s announcements and barely paid attention any more. They said the company was prepared and self-sufficiency projects were well under way.

Huawei had managed to survive and grow over the past two years in the face of growing US pressure on its customers and supply chain, they said.

“Having a strong adversary will force us to become even stronger,” said one employee.