The UK’s mobile providers are being banned from buying new Huawei 5G equipment after 31 December, and they must also remove all the Chinese firm’s 5G kit from their networks by 2027.

Digital Secretary Oliver Dowden told the House of Commons of the decision.

It follows sanctions imposed by Washington, which claims the firm poses a national security threat – something Huawei denies.

Mr Dowden said the move would delay the country’s 5G rollout by a year.

The technology promises faster internet speeds and the capacity to support more wireless devices, which should be a boon to everything from mobile gaming to higher-quality video streams, and even in time driverless cars that talk to each other. 5G connections are already available in dozens of UK cities and towns, but coverage can be sparse.

Mr Dowden added that the cumulative cost of the moves when coupled with earlier restrictions announced against Huawei would be up to £2bn.

“This has not been an easy decision, but it is the right one for the UK telecoms networks, for our national security and our economy, both now and indeed in the long run,” he said. 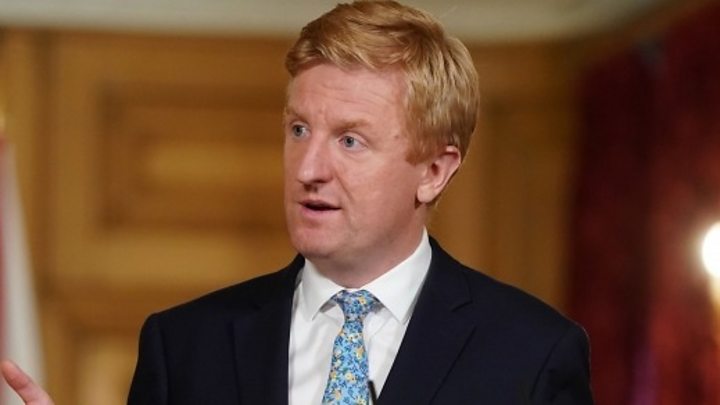 Media captionWatch: The digital secretary says providers must remove all of Huawei’s 5G kit from their networks by 2027

Because the US sanctions only affect future equipment, the government has been advised there is no security justification for removing 2G, 3G and 4G equipment supplied by Huawei.

However, when swapping out the company’s masts, networks are likely to switch to a different vendor to provide the earlier-generation services.

Huawei said the move was “bad news for anyone in the UK with a mobile phone” and threatened to “move Britain into the digital slow lane, push up bills and deepen the digital divide.”

The action, however, does not affect Huawei’s ability to sell its smartphones to consumers or how they will run.

China’s ambassador to the UK said the decision was “disappointing and wrong”.

“It has become questionable whether the UK can provide an open, fair and non-discriminatory business environment for companies from other countries,” tweeted Liu Xiaoming.

But US Secretary of State Mike Pompeo welcomed the news, saying: “The UK joins a growing list of countries from around the world that are standing up for their national security by prohibiting the use of untrusted, high-risk vendors.”

New restrictions will also apply to use of the company’s broadband kit.

Operators are being told they should “transition away” from purchasing new Huawei equipment for use in full-fibre networks, ideally within the next two years.

Many of Huawei’s products are developed at its labs near Shenzhen, China

Mr Dowden said the government would “embark on a short technical consultation” with industry leaders about this.

He explained that the UK needed to avoid becoming dependent on Nokia – which is currently the only other supplier used for some equipment – and he wanted to avoid “unnecessary delays” to the government’s gigabit-for-all by 2025 pledge.

BT’s Openreach division told the BBC it had in fact recently struck a deal to buy full-fibre network kit from a new supplier – the US firm Adtran – but first deliveries would only start in 2021.

The UK last reviewed Huawei’s role in its telecoms infrastructure in January, when it was decided to let the firm remain a supplier but introduced a cap on its market share.

But in May the US introduced new sanctions designed to disrupt Huawei’s ability to get its own chips manufactured. The Trump administration claims that Huawei provides a gateway for China to spy on and potentially attack countries that use its equipment, suggestions the company strongly rejects.

The sanctions led security officials to conclude they could no longer assure the security of its products if the company had to start sourcing chips from third-parties for use in its equipment.

The minister cited a review carried out by GCHQ’s National Cyber Security Centre as being the motivation for the changes.

NCSC has said Huawei products adapted to use third-party chips would be “likely to suffer more security and reliability problems”.

But other political considerations are also likely to have also come into play, including the UK’s desire to strike a trade deal with the US, and growing tensions with China over its handling of the coronavirus outbreak and its treatment of Hong Kong.

Some backbench Tory MPs had pressed for a shorter time-span for its removal, in particular there had been calls for the 5G ban to come into effect before the next election in May 2024.

However, Mr Dowden said that “the shorter we make the timetable for removal, the greater the risk of actual disruption to mobile phone networks”.

BT and Vodafone had warned that customers could face mobile blackouts if they were forced to remove all of Huawei’s 5G kit in less time.

Labour’s shadow technology minister Chi Onwurah said the government was incapable of sorting “this mess out on their own”.

It had “refused to face reality” and been “incomprehensively negligent” in allowing matters to get to this point, she added, and a taskforce of experts now needed to be created.

Hopes on the part of government that this decision may put the Huawei issue to bed may be optimistic.

The reason that we are here again despite a decision in January is because one of the key players – the US – played a new card in the form of sanctions.

And there is still time between now and legislation coming to parliament in Autumn for others to do the same – whether Conservative backbenchers or Beijing.

In the long run, many countries will be watching carefully how China reacts.

Will it feel it needs to punish the UK in order to discourage others from following its lead on 5G? Or will it want to avoid being seen as a bully and prefer to try and influence the decision more subtly? Whatever the case, the Huawei story in the UK is not over yet.

Huawei says it employs about 1,600 people in the UK and claims to be one of Britain’s largest sources of investment from China.

The UK will have accounted for a fraction of that. The firm’s UK chief recently noted that Huawei had only deployed a total of 20,000 5G base stations – the radio receiver/transmitter equipment fitted to a mast – in the UK so far. By contrast it expects to deliver a total of 500,000 globally this year.

Even so, what the firm fears and Washington hopes is that other countries will now follow Westminster’s lead with bans of their own.

Despite there seeming little chance of a U-turn, Huawei said it was still urging UK ministers to reconsider.

“We will conduct a detailed review of what today’s announcement means for our business here and will work with the UK government to explain how we can continue to contribute to a better connected Britain,” spokesman Ed Brewster said.

Shortly before the announcement Sky News revealed that Lord Browne, Huawei’s UK chairman and the ex-chief executive of BP, would be leaving the Chinese company before his term had expired. It said he had given his notice a few days ago and would formally step down in September.

Lord Browne had led efforts to improve the company’s image in the UK and had tried to prevent a ban.

“He has been central to our commitment here dating back 20 years, and we thank him for his valuable contribution,” said Huawei, confirming the report.

BT is set to be the telecoms operator most affected by the decision given it runs both the EE mobile network and Openreach, which provides fixed-line infrastructure to individual internet providers.

“We need to further analyse the details and implications of this decision before taking a view of potential costs and impacts,” it said.

The move should, however, benefit Nokia and Ericsson, which are the two other main 5G kit vendors.

“We have the capacity and expertise to replace all of the Huawei equipment in the UK’s networks at scale and speed… with minimal impact on the people using our customers’ networks,” said Nokia.

Huawei still supplies masts and other 5G equipment to Germany, Switzerland and China among other countries

Ericsson added: “Today’s decision removes the uncertainty that was slowing down investment decisions around the deployment of 5G in the UK… and we stand ready to work with the UK operators to meet their timetable.”

However, both firms manufacture some of their 5G equipment in China, which has also caused concern in Washington.

In June, the US Department of Defense published a list of 20 companies it claimed had close ties to the Chinese military.

It included Panda Electronics – the firm with which Ericsson jointly runs a manufacturing facility in the Chinese city of Nanjing.

“A lot of companies assemble equipment or have some type of manufacturing in China,” Ericsson’s head of corporate communications Peter Olofsson told the BBC, when asked about this.

“Our trade compliance people have looked at this (list) and they concluded that it’s not something that has an impact on Ericsson or our operations.”

Ultimately Huawei believes that this was a political decision and not a business one.

And if the political winds change, then Huawei’s fortunes may too.

My understanding is that a longer time frame for the removal of its 5G kit from UK networks was a relatively desirable outcome for Huawei.

So even though no new Huawei UK equipment can be bought by UK mobile carriers after the end of this year, the fact that the UK has until 2027 to remove Huawei’s 5G kit from all of its network could be seen as a potential positive.

A new US administration in November could markedly change Washington’s position on Huawei.

So for Huawei, playing the long game makes sense.

And one thing that was crystal clear to me from meeting Ren Zhengfei, the company’s founder is that he’s a fighter.

Ren Zhengfei told the BBC: ‘If the lights go out in the West, the East will still shine. And if the North is dark, then there is still the South.’

Nothing he has said indicates he is willing to give up.

For now though, the immediate impact of the UK decision will be seen as a signal that Washington’s campaign on Huawei has worked.

And the Chinese firm will not want that replicated in other countries around the world.