The US crackdown on Chinese apps TikTok and WeChat and on tech manufacturers Huawei and SMIC is dominating headlines. Amid the chaos, readers might have missed the news that Taiwan has eased restrictions on US meat imports — or perhaps missed the significance. The move could boost Taiwan’s economy and security but risks opening a new front in the US-China trade war. The question is, will the US commit to talks? That is the focus of our main piece today.

Our policy watch examines the latest developments in EU-UK trade talks, while our chart of the day looks at how the pandemic has affected Singapore’s exports.

Will the US play ball?

When Taiwan’s president Tsai Ing-wen eased restrictions on US pork and beef imports in late August, she removed a longstanding barrier to bilateral trade talks between Washington and Taipei. The rules, which stemmed from health concerns and local protectionism, were long thought too politically sensitive to change. But Tsai, a former trade negotiator who is in the second of two presidential terms and has strong support following her coronavirus response, risked her political capital in an urgent attempt to deepen ties with the US and reduce reliance on China.

There is a lot on the line. For the unfamiliar, Beijing sees the self-governed territory of 24m people as part of China, opposes any semblance of independence and has not ruled out using force to take control. Taiwan’s economic dependence on China exposes businesses and politicians to coercion, say critics. But because officials from Tokyo to London are afraid of Beijing’s ire, Taipei has struggled to win bilateral trade deals or gain a foothold in regional multilateral agreements such as the Trans-Pacific Partnership or Regional Comprehensive Economic Partnership (RCEP).

The question is, will the US play ball?

First, a dose of realism. Notwithstanding support from the state department and National Security Council, the Office of the US Trade Representative has shown little interest in starting talks with Taiwan.

According to Rupert Hammond-Chambers, president of the US-Taiwan Business Council, USTR Bob Lighthizer opposes risking the “phase one” US-China trade deal. That agreement, which helped halt an escalating tit-for-tat tariff battle, includes promises by China to make bigger US agricultural purchases — helpful for Donald Trump as he stands for re-election in November.

“State, NSC, (the commerce department) and the vice-president’s office, they are all pressuring the USTR to lean into the possibility of a bilateral trade agreement. USTR is the hold out,” said Hammond-Chambers, who is lobbying for talks to start. “They don’t want to make even a public statement on Taiwan, for fear that it may disrupt any potential progress with the Chinese.”

As for an incoming Biden administration, few expect there would be immediate interest given other priorities. The realistic best-case under a Joe Biden presidency would be a restart of the defunct Trade and Investment Framework Agreement talks. For Taipei, this would be an underwhelming gesture given the perceived existential threat it is trying to counter, but better than nothing.

“Any WTO member is entitled to negotiate another free trade agreement with any other WTO member — so, under WTO law, there is no constraint so long as you follow certain rules,” said Charles Finny, a former New Zealand diplomat who negotiated FTAs with Taipei and Beijing.

He added: “If I were a US official, I would be taking the New Zealand and Singapore agreements with Taiwan as precedent documents and follow very closely the format of those agreements.”

Supporters of a deal point to Taiwan’s position as a rare beacon of bipartisanship in Washington. Democrats and Republicans support US-Taiwan arms sales and Taiwan’s participation in the World Health Organization, despite Beijing’s protests. The president — be it Trump or Biden — could use a Taiwan deal as a quick win for bridge-building with the opposition.

It is also feasible that the importance to the White House of its “phase one” trade deal with China will fade after the election. This could create more space for the USTR to be swayed by the view from colleagues elsewhere in government that closer economic ties with Taiwan is in line with the US strategy of forging deeper ties among allies as a bulwark against Beijing and decoupling from Chinese supply chains.

And a US-Taiwan agreement, say proponents, could embolden governments such as Canberra and Tokyo to start their own talks with Taipei, especially as they too seek to reduce their trade dependency on China.

“Aspirationally, it is very much the hope that the US deal is the ‘leadership deal’, that it provides the right framework, commensurate with the WTO, for other countries then to follow,” says Hammond-Chambers. “There is a hope that there would be some domino effect.”

Ultimately, however, the flux in Washington and the near certainty of protest from Beijing mean a deal, let alone official talks, is by no means a fait accompli. Tsai and her predecessors might well be rueing not making the move on beef and pork years ago.

Singapore is one of the world’s most open economies with the value of its trade in goods and services equating to more than three times its overall economic output. However, overall trade began to dip last year and more recently the impact of coronavirus on the movement of goods has taken its toll. A lack of demand for oil and other related products has been a drag on the overall volume of exports leaving Singapore since the pandemic took hold. 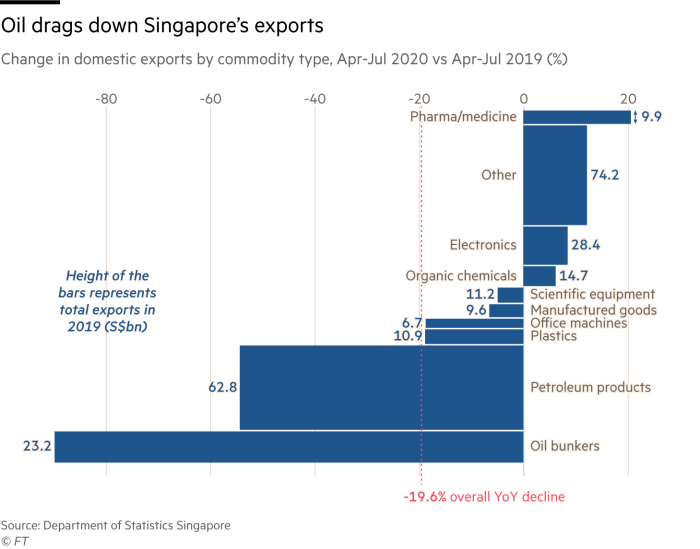 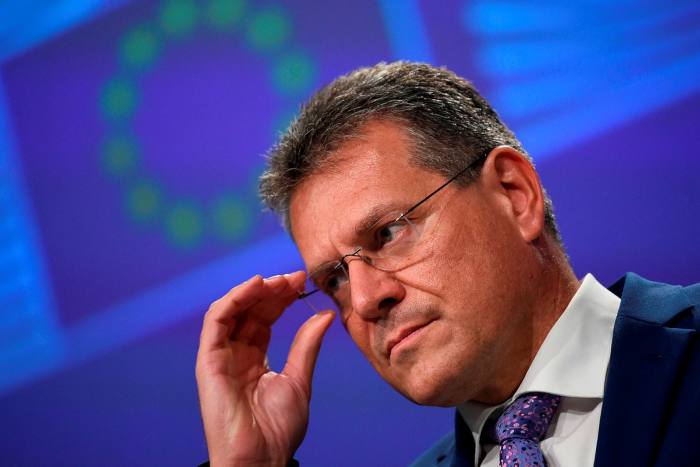 The EU and the UK will press ahead with trade talks starting on Tuesday in Brussels, even as both sides refuse to concede any ground over UK prime minister Boris Johnson’s plan to introduce new legislation that overrides his Brexit divorce treaty, write Jim Brunsden and George Parker.

Maros Sefcovic, the EU commissioner in charge of overseeing last year’s withdrawal agreement, on Monday said Brussels would “not be shy” in legally pursuing the UK once an end-of-September deadline passes for Johnson to rewrite his internal market bill.

“We maintain that the bill, if adopted in its current form, would constitute an extremely serious violation of the protocol, as an essential part of the withdrawal agreement, and of international law,” Sefcovic said after a meeting with the UK’s Cabinet Office minister Michael Gove in Brussels. He added that he had “repeated the EU’s request to withdraw the contentious parts of the draft internal market bill by the end of September” or face legal action.

The bill, defended by the UK as a safeguard against unreasonable behaviour by the bloc, seeks to rewrite parts of the withdrawal agreement relating to state aid and export certificates in Northern Ireland.