Hello from Brussels. Three days left to get your application in as World Trade Organization director-general. After an early flurry of applications, there’s been nothing for a couple of weeks. Currently there are five candidates, rather fewer than the nine who applied last time. One big question is whether Kenya’s Amina Mohamed, a highly credible potential candidate who expressed interest early on, will get the nod from the Kenyan presidency to nominate her. Things have gone very quiet from Nairobi recently. And after all that talk about “Big Phil” Hogan, it seems likely there will be no candidate from the EU at all, let alone one that all the member states can rally round.

Still, even though it will be a hell of a challenge getting the US back onside, it will at least still be a member. Josh Hawley, the senator from Missouri, has been thwarted in his attempts to call a withdrawal vote by the procedural manoeuvring in which the US Senate is so practised. This week’s main piece is on how governments continue to chunter about refashioning supply chains in the absence of evidence that there is a broad and urgent problem to address. Today’s Tit-for-Tat is with Emily Rees, newly appointed fellow at the Brussels think-tank the European Centre for International Political Economy (Ecipe), while our chart of the day looks at US merchandising exports.

With coronavirus lockdowns being lifted across advanced economies — though brace yourself for more reversals in dysfunctional countries — detailed work is starting on fleshing out all that ambitious talk of reshoring and diversification. Studies are being commissioned, reviews are being launched, pots of money are being allocated, the search for a better name than “global value chain” is under way.

We were somewhat sceptical when the need for radical change in supply networks was first mooted. With evidence trickling in, we’re still not convinced there’s a broad problem here that needs fixing, and particularly not that reshoring and self-sufficiency is the way to go.

The more we go on, the more it seems the collapse in global trade was primarily demand, not supply. Food is a good example. Dire warnings about general food shortages, at least in advanced countries, haven’t really materialised. There were empty shelves in some supermarkets for a few weeks and slightly longer-lasting shortages of a few products such as flour, sure. But the latter was the result of a big shift towards home baking, not sudden supply constraints, and it saved us from at least a few people smugly Instagramming sourdough loaves from their kitchens.

Conceptually, here’s the way we think about it. You can divide globally traded goods into several categories for the purposes of resilience against coronavirus or similar shocks and the role governments can play. (This is not an exhaustive list and don’t worry, this isn’t our last word on the issue.)

At one end of the spectrum are basic goods needed in large quantities in a pandemic: face masks, gloves, gowns. At the other end are fiercely sophisticated products such as cars, with thousands of components and huge global networks of suppliers. In the middle are goods simpler than cars, but some of which are potentially dependent on bottleneck suppliers, such as pharmaceuticals and electronics. (There are also particular cases intrinsically dependent on government regulation and procurement — such as vaccines.)

The OECD has already written what looks like the definitive take on face mask supply chains. In short, they’re cheap to make once you’ve got mass production going but short-term supply is inelastic. There were problems with distribution during the globally acute phase of the pandemic, but the main bottleneck was the shortage of non-woven fabric made with polypropylene. It isn’t exactly cutting-edge technology but requires high capital investment in heavy machinery. Then, of course, the export restrictions by the EU and others amplified the problem.

Given high fixed costs, economies of scale and uncertain and intermittent demand, self-sufficiency is wildly impractical unless the state owns or indefinitely subsidises a mask producer with vast idle capacity. Governments would do better to stockpile (from whatever source) plus sign agreements with industrial companies to convert production in a crisis.

For super-sophisticated goods such as cars, any shift is likely to be done by companies themselves, not by governments. The state cannot micromanage supply chains with tens of thousands of components. In any case, as we’ve said before, supply relationships are so complex and expensive to set up that multiple sourcing is likely to make you bankrupt. Early anecdotal evidence from Japan and Europe is that companies are examining supply chains but even in simpler goods there isn’t much sign of large-scale diversification yet.

The really interesting bit here is the middle ground, and it’s here, we think, that research needs to focus. There’s been an interesting initial stab at looking broadly at EU supply chains by researchers at the European Commission’s trade directorate and the Ecipe think-tank. Their conclusions were quite encouraging for the diversification crowd. Half of the goods imported into the EU are sourced from more than 25 countries. Only about 250 products out of 9,000 were bought from one country, which collectively made up less than 1 per cent of the value of imports.

But as the researchers say, we need to go more granular. If the EU is vulnerable to shortfalls even in quite basic essential components with inelastic supply from elsewhere — chemicals used in pharmaceuticals, rare earths — it has the potential to knock out entire supply chains. Getting this right such that governments can actually help in promoting diversification is going to require some fearsomely detailed work that’s going to take years. We’ll keep you updated.

Chinese stocks have been surging as investors bet on a decent economic recovery for the country — though figures last week suggested that China was still falling behind on its commitments to buy US goods under the phase one trade deal. Compared with other countries, though, the US is exporting more merchandise goods to China of late, with exports to China rising since the start of 2019 even as they’ve dropped to most other trading partners. 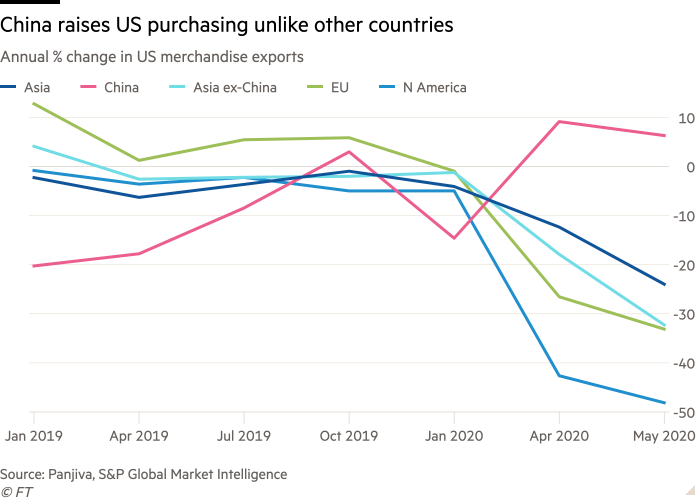 Does European anger at deforestation in the Amazon mean the EU-Mercosur deal is dead on arrival when it comes up for ratification by EU member states in the autumn?

Illegal deforestation is devastating wherever it occurs, be it within the Brazilian Amazon basin or Poland’s primeval forest. Europeans and Latin Americans share a moral responsibility to curb embedded deforestation from illegally entering into supply chains. By enshrining the Paris Agreement and introducing the precautionary principle to environmental matters, the EU-Mercosur trade deal offers an unrivalled opportunity for both regions to tackle these issues together, rather than apportion blame. How would Europe snubbing Mercosur after 20 years of negotiations provide a remedy? Rebuffing it equates to accepting the status quo. Latin American soy already enters the EU at zero tariff; if anything, the agreement would introduce sustainability standards for such imports. Failing to ratify the treaty would weaken, rather than reinforce, Europe’s environmental leverage in a region where it has consistently been losing influence to China.

Do environmental concerns and post-pandemic reshoring mean the EU will become increasingly protectionist?

The imposition of a carbon border levy and twisting of competition rules to support re-industrialisation were on the table prior to COVID-19. The pandemic simply made these policies more palatable, with state aid less of a taboo. Unless encouraged by an unfair government incentive, the reshoring of a supply chain is a business decision that does not equate to protectionism. The bigger issue is how Europeans’ genuine concern for environmental protection is being captured by nationalistic movements. This trend is particularly noticeable for food where gastro-protectionism is being revived on the narrative that buying local is the climate-friendly choice. The onus is now on EU authorities to ensure that the implementation of the European Green Deal does not translate into a series of protectionist measures that unfairly harm foreign producers, particularly in less developed countries.

How will the rest of Phil Hogan’s term as EU trade commissioner turn out, now he’s decided not to run for director-general of the WTO?

The uncertainty generated by the EU trade chief mulling over the WTO’s top job should spark redoubled efforts to spearhead an ambitious trade policy overhaul. Nobody enjoys feeling like the second choice, EU governments included. Phil Hogan must rapidly build trust in his ability to deliver results, and this should start with swiftly negotiating a truce with the United States on civil aviation subsidies. With member states already flirting with protectionism, Hogan will have to forcefully argue that fortress Europe is a losing strategy, particularly in a post-pandemic downturn. Ultimately, the stress-test of Hogan’s term of office could turn out to be his saving grace. Building consensus on the Mercosur deal, an agreement he actively participated in sealing, provides an opportunity to show he acts on behalf of the bloc’s economic interests rather than those of special interest groups, including Irish beef farmers.