The coronavirus pandemic has put millions more workers across the developed world out of jobs than official unemployment statistics suggest, according to economists’ estimates — threatening economic recovery prospects in the months ahead.

More than 25m people in the euro area and the US are officially unemployed, according to figures published last week.

But economists say the true number of people who have lost work because of the pandemic is far higher, after taking account of those whose jobs are temporarily protected by state-subsidised furlough schemes, those who have dropped out of the labour force and those who cannot work as many hours a week as they would like.

Estimates of the exact number of people whose livelihoods have been damaged vary wildly. But governments across the developed world all face the same dilemma: the immediate economic shock of the initial lockdown measures has eased, but lingering joblessness is likely to cause widespread hardship, hold down wages and slow the pace of a consumer-driven recovery.

“The labour market reaction holds the key to understanding the latest ramifications of the virus shock, similar to the role banks played during the great financial crisis or sovereigns during the euro crisis,” said Marc de Muizon, an economist at Deutsche Bank.

When job openings are scarce, as they are now, workers’ leverage dissolves . . . Employers simply don’t have to pay as well when they know workers don’t have outside options

Katharina Utermöhl, an economist at Allianz, said official measures of unemployment were “the tip of the iceberg”, and that there was evidence of some 30m discouraged workers going missing from the official statistics across 25 OECD nations and emerging economies.

Some of this hidden unemployment — far greater than seen in previous recessions — is likely to become visible in official statistics when data for September are released later this month because parents re-entered the jobs market when schools reopened, she added.

In the eurozone the official unemployment rate, which stood at 6.5 per cent in February, ticked up to 8.1 per cent in August, according to data published last week — or 13.2m people.

But Aline Schuiling, an economist at ABN Amro, said that the true level of eurozone joblessness is at least 4 to 4.5 percentage points higher than the official unemployment rate, assuming that up to a fifth of employees estimated to be on short-time work schemes will eventually become unemployed.

“A lot of these people work in sectors that should by now be at full activity. They are no longer distorted by the pandemic. It is reasonable to say some will become unemployed,” she said.

Her figure also includes people who have dropped out of the labour market but do not meet the criteria to be officially classified as unemployed, either because they are not available for work or are not actively searching.

Mr de Muizon said that eurozone unemployment would have climbed above 10 per cent by the middle of the summer, had people not been counted as inactive because school closures, lockdown measures or health concerns stopped them hunting for work — a rise from 11.6m people to more than 16m. 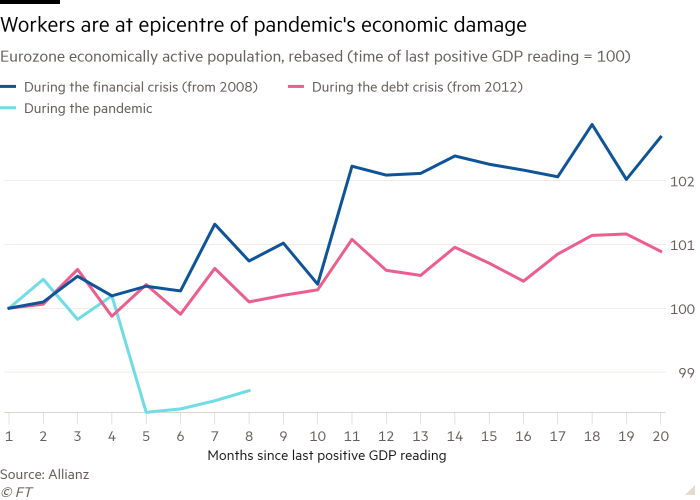 In addition, 5 to 10 per cent of eurozone workers were still enrolled on furlough schemes by August, in jobs that may prove not to be viable, he said.

Ms Utermöhl estimated that the inclusion of economically inactive people alone would raise the official unemployment rate to over 20 per cent in Spain, over 10 per cent in the US and Italy, and nearly 9 per cent across the eurozone as a whole.

In the US, the dynamics are different. Furloughed workers are counted as unemployed in official statistics so the first wave of job losses was only too visible. Unemployment peaked at 14.7 per cent in April — some 23m people.

Since then the economy has regained about half the jobs that were lost. Unemployment fell to 12.6m, 7.9 per cent of the labour force, in August. But much of the apparent improvement was because of discouraged workers falling out of the labour market. The official rate understates the true extent of joblessness and the pace of improvement has slowed. Some furloughed workers have returned but there is little other recruitment and a growing number of companies, from airlines to theme parks, are making permanent job cuts.

Jason Furman, a professor at Harvard and former adviser to president Barack Obama, calculates the “realistic unemployment rate” at 9.6 per cent — with about 2.3m people missing from the official count — after adjusting it to reflect 750,000 people who he says have been misclassified, and a much steeper decline in labour force participation than seen in past recessions.

Heidi Shierholz, senior economist at the Economic Policy Institute, estimated that at least 33m workers have been harmed directly, after taking account of misclassification, undercounting, those who have dropped out of the labour force and those whose hours and pay were cut after the reimposition of local lockdowns. 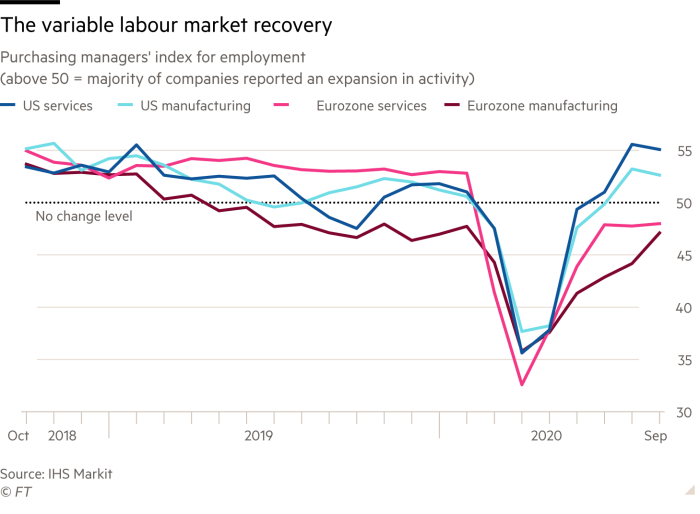 A protracted period of high unemployment and underemployment, with an army of discouraged workers waiting on the sidelines, threatens the economic recovery, as it would hold back wage growth, household incomes and spending, according to David Page, an economist at Axa Investment Managers.

For each month that the hidden unemployed remain left out of the labour force, global private consumption incurs a £14bn loss, Ms Utermöhl estimated, largely in areas of discretional social spending that are already the hardest hit by Covid-related restrictions.

“When job openings are scarce, as they are now, workers’ leverage dissolves,” Ms Shierholz warned. “Employers simply don’t have to pay as well when they know workers don’t have outside options.”