A fresh surge in coronavirus cases is putting pressure on governments on both sides of the Atlantic to maintain emergency labour market support mechanisms at a time when politicians had hoped that their economies would be gradually returning to normal.

Many employees laid off temporarily at the start of lockdowns have returned to work, but millions have not, and job gains are slowing.

Meanwhile, permanent job cuts are mounting, putting governments under pressure to avert a long-term unemployment crisis that would cause intense hardship and set back the general economic recovery which depends on households being secure enough in their prospects to spend rather than save.

Some jobs have been lost temporarily — these show up in the US unemployment figures because it decided to support workers with benefit payments, but not in Europe where countries generally warded off job losses through subsidies for companies to keep workers on board. Some have now returned to work.

Short-time work schemes are effective in preserving existing jobs, but may be less efficient in facilitating post-crisis adjustment

US temporary job losses are declining, pushing the unemployment rate down from 14.7 per cent in April to 10.2 per cent in July.

But on both sides of the Atlantic, the improvements are showing worrying signs of petering out.

“This is slowly morphing into a long-term unemployment problem,” said Jay Shambaugh, a fellow at the Brookings Institution and former White House adviser, noting that 5 per cent of the US population had now been unemployed for more than 15 weeks.

Jason Furman, former economic adviser to Barack Obama, recently said on Twitter that “this is mostly the ‘easy’ job growth”, noting that the net gain masked much bigger flows both into and out of the labour market, with 4.3m people falling out of US employment in July. For Mr Furman, a more realistic US unemployment rate — including people classified as not working for other reasons — would be closer to 12 per cent.

In Europe, meanwhile, millions of workers remain reliant on state wage subsidies. Even in Germany, one of the countries less affected by the virus, the number of short-time workers has fallen only gradually, from 7.3m in May to about 5.6m in July, according to estimates by the Ifo Institute in Munich. In some areas of manufacturing it increased last month — a development Sebastian Link, a researcher at the think-tank, described as “very worrying”.

In the spring when Covid-19 first began to surge in North America and Europe, it was widely expected that economies could be heading back to normal by late summer. Now few are so sure, and politicians and economists are grappling with the question of how to protect jobs.

The question is how far countries can dial back job support programmes when they cannot yet declare victory over the pandemic. And in recent weeks the rise in new coronavirus cases has placed governments under intense pressure to extend labour protection.

After a row with Democrats in Congress, Donald Trump this month sought to temporarily extend jobless benefits through executive action, while cutting them from $600 per week to $400. However many states have balked at implementing the plan because the White House asked them to share some of the cost, and because of the administrative complexity. So barely any money has started to flow.

In Europe, many countries are reluctantly postponing the end of their temporary wage subsidy schemes.

The difficult balance to strike in all labour markets is between continuing to support jobs which might come back while avoiding subsidising people in roles which have little prospect of returning.

When Europeans transition from wage subsidies to jobless benefits, their governments will confront the problem already facing the US: what level of benefits will protect livelihoods while also providing an incentive to look for work.

The vast sums spent on wage subsidies are increasingly supporting jobs that are unlikely to recover, the OECD recently warned.

“Short-time work schemes are effective in preserving existing jobs, but may be less efficient in facilitating post-crisis adjustment across sectors,” the OECD said, as it recommended making companies pay an increasing share of wages for furloughed workers. 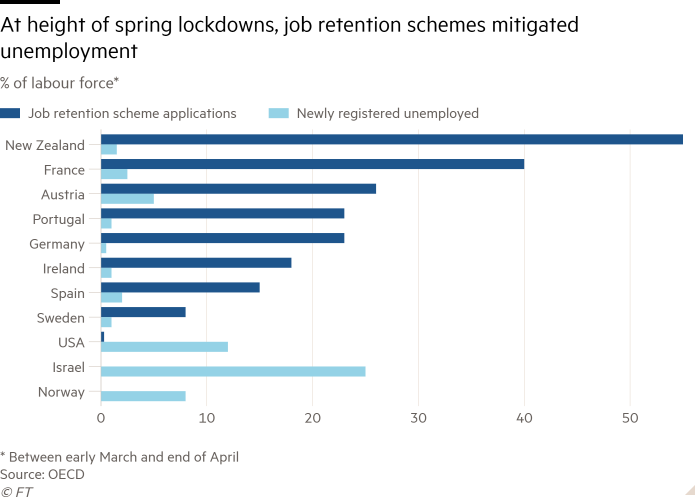 At the heart of the dilemma for policymakers is that the right choice also depends on the spread of the virus. If cases are high and rising they should take a more generous view, but if the disease is under control, firmer incentives will be needed to signal that temporary support will not continue for much longer.

The UK is ploughing ahead with the tough approach, arguing its job retention scheme must end by November. But France has extended its scheme, as has Spain, and similar moves are under consideration in Germany and Italy.

Given the uncertainties over the spread of the virus, the OECD recommends that time limits “should not be set in stone”. But it has urged governments to gradually shift from supporting existing jobs to helping workers transition into other roles — by reducing the gap between wage subsidies and regular unemployment benefits, and by helping furloughed workers retrain.

As part of this process large rises in unemployment are likely, economists warn, making Europe’s labour markets look more like the US.

“We will see a tightening up over the next year or so — and that will cause unemployment to rise,” said Jessica Hinds, of the consultancy Capital Economics, adding that short-time work schemes could not be used so widely indefinitely without distorting their original purpose.

“German Kurzarbeit was not designed for this. It was designed for very qualified permanent workers in the manufacturing sector where it is difficult for firms to hire replacements and more efficient to ride out a one- to two-month period,” she said.