A declining dollar usually boosts trade and the resilience of the global economy and helps to reduce trade imbalances — but its drop since the start of the pandemic crisis is unlikely to do so.

This is in part because the particular confluence of global currency movements has created winners and losers, and also because the spread of the virus itself is hindering the ability of economies to adjust.

Since the start of June the dollar has undergone a sudden reversal in popularity among investors who have shifted from viewing it as the global haven to an unfashionable bet. The dollar index has fallen more than 9 per cent since its crisis-induced peak in March.

Reasons for holding dollars have dwindled rapidly, according to many currency analysts.

US Federal Reserve interest rate cuts have eroded the differential between the US and other developed economies as part of its response to the Covid-19 crisis.

Meanwhile the US government’s failure to keep coronavirus under control as effectively as leading European and Asian governments and EU leaders’ €750bn European Recovery Fund to rebuild the continent’s economy after the pandemic has fuelled an upswing in confidence about the outlook for the eurozone and the euro.

“The dollar has transitioned into a bear market. It’s not going to happen in the next few weeks but in over the course of the next five years we think that the dollar could weaken as much as 15 to 20 per cent against a basket of its peers,” said Aaron Hurd, a senior portfolio manager at State Street Global Advisors.

Analysts at JPMorgan said: “Relative growth rather than higher US rates is likely to be the dominant driver of the dollar . . . High infections in the US . . . and the political landscape is still likely to be a net drag on the dollar.”

Among advanced economies, the fall in the dollar is likely to have beneficial global effects — so long as it does not develop into a rout. For decades the US has run persistent deficits in trade and on its current account and a weaker currency improves the competitiveness of US exports while making imports from other advanced economies more expensive.


Alongside any boost to domestic demand that the EU’s recovery fund can generate, the net effect should be a more balanced global economy at a higher level of demand, although the effects might not be large if the US continues to have more access to cheap finance than others.

But not every part of the global economy is experiencing the dollar’s decline.

The dollar index measures the value of the US currency against a basket of advanced economy currencies, dominated by the euro. The eurozone’s currency accounts for 57.6 per cent of the weight in the currency basket, and is joined by the yen, sterling, the Canadian dollar, the Swedish krone and the Swiss franc.

But the index does not include any emerging economies’ currencies, and the greenback has gained in value against most of them since the pandemic first emerged. The dollar has gained nearly 25 per cent against the Brazilian real since March, while it is more than 10 per cent stronger against the Mexican peso and the Russian rouble. 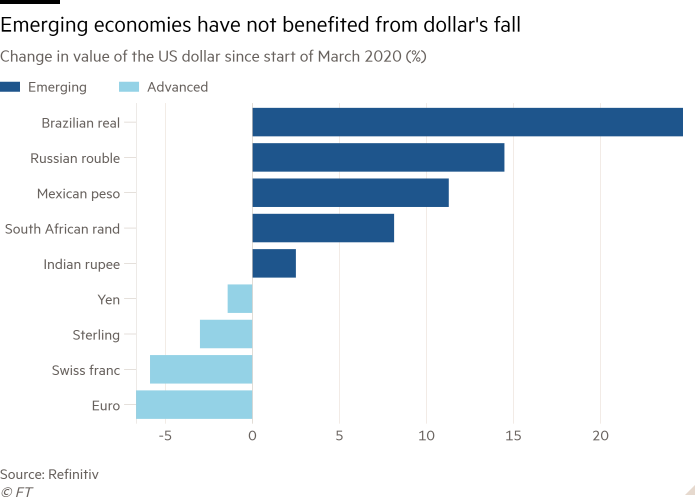 And it is these currency movements that threaten to undermine the global economy’s prospects.

Traditional economics would predict that the currencies of most emerging economies would benefit from weakening against the dollar, because it would deliver a boost in demand, both by making their exports more competitive and raising the price of imports.

But a growing number of economists fear that this argument is wrong.

Emerging and developing economies’ trade is largely priced in US dollars, so their exports do not get more competitive when their currencies weaken. This means the demand boost is much weaker, influential research by the IMF recently suggested. And because imports from other emerging economies are also priced in dollars, overall trade is hit, rather than just imports from the US.

This effect has been compounded by coronavirus. The biggest export that is priced in domestic currency — tourism — has been hard hit by travel restrictions and is suffering much more than it normally does when emerging currencies weaken.

Governments and companies in emerging economies that have borrowed in dollars are at the sharp end of this crisis because they need higher domestic revenues to finance existing borrowings. The IMF argues that this combination is likely to be toxic for the global economy.

The strengthening of the dollar against emerging and developing economies “is likely to amplify the short-term fall in global trade and economic activity”, IMF analysts concluded.

Even economies that have benefited from the pandemic-induced currency movements are unlikely to benefit much, said Stephen King, senior adviser to HSBC.

Having a rising currency against the dollar “would remove a little bit of the emerging market funding pressure, but not enough to offset the effects of the pandemic and a loss of fiscal firepower”, he said.