Germany’s economy will recover faster than expected from the coronavirus pandemic, with the resilience of its labour market helping achieve a sharp, V-shaped recovery, the government has said.

Peter Altmaier, economy minister, said Berlin expected Europe’s largest economy to shrink by 5.8 per cent this year, compared with its earlier forecast of a 6.3 per cent contraction. He forecast the economy would return to pre-pandemic levels in 2022.

“The recession in the first half of the year was not as bad as we feared, and the recovery since the high point of the shutdown is happening faster and more dynamically than we had dared hope,” Mr Altmaier told journalists on Tuesday.

His comments came after the number of unemployed in Germany fell for the second consecutive month in August as the labour market continued to rebound from the impact of the pandemic.

However, Joachim Lang, head of Germany’s BDI business association, said the economic situation remained serious: “In terms of production and exports, industry is still very significantly below the previous year’s level,” he warned. “The recovery has started, but will last for several quarters in many industries.”

We have got through the trough. Since May we have been registering a clear economic recovery, in services, in trade and in industry

Germany suffered a record postwar recession as its economy shrank 12 per cent in the first half of this year. But it outperformed other large European countries, helped by having fewer Covid-19 infections, a less restrictive lockdown and a stronger framework of state support.

Last month, the national statistics agency revised its estimate for the second-quarter decline in the German economy from its initial estimate of minus 10.1 per cent to minus 9.7 per cent. Most economists expect growth of more than 6 per cent in the third quarter.

“We have got through the trough,” said Mr Altmaier. “Since May we have been registering a clear economic recovery, in services, in trade and in industry.”

While daily coronavirus infections in Germany have risen recently, Mr Altmaier said he was “convinced that we can and will avoid a second general shutdown”.

He warned that German exports were expected to fall this year by 12.1 per cent, but said the government had cushioned the impact of the global recession by providing emergency aid to more than 3m companies.

The government recently expanded its package of economic support measures, including extending its Kurzarbeit furlough scheme, under which workers are sent home and receive about two-thirds of their pay from the government. It also lengthened the time that companies hit by the pandemic are exempt from having to declare insolvency.

“On the labour market, the worst fears have not been confirmed . . . things are going in the right direction,” Mr Altmaier added.

Germany’s Federal Employment Agency said on Tuesday that the number of jobless fell by about 9,000 in August, adding to signs that Europe’s largest economy is steadily shaking off the disruption of the pandemic.

“As in July, there was no additional corona-related rise in unemployment,” said Detlef Scheele, chairman of the agency. “Nevertheless, the effects of the pandemic on the labour market are still very clearly visible.” 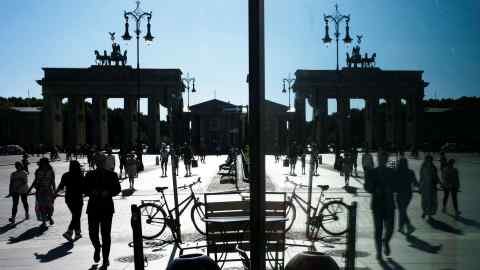 The record postwar recession triggered by the pandemic has increased the number of jobless in Germany by 636,000 over the past year to almost 3m, although the country still has one of the lowest unemployment rates in Europe.

The number of people on the Kurzarbeit scheme fell from 5.82m in May to 5.36m in June, the agency said. The number in employment rose by 53,000 in July, as the unemployment rate remained stable at 4.5 per cent.

However, Ralph Solveen, a Commerzbank economist, warned there could be a delayed impact on the labour market if a significant number of furloughed jobs were eventually lost.

“Even if the recovery of the German economy, which has been under way since the end of April, is having a positive impact on the labour market, the crisis is far from over here,” he said.