Orders at Germany’s factories jumped by a record amount in June, fuelling hope that Europe’s largest economy is powering back into action after the damage from pandemic-related lockdowns.

Incoming orders rose by 27.9 per cent in June from a month earlier, the Federal Statistical Office said on Thursday, after plunging by a record volume at the height of the lockdown in April. The rise was the largest since records began in 1991 and almost three times higher than the increase in May.

“(This was) a positive headline following the relatively modest increase midway through the quarter, immediately after lockdowns were lifted,” said Claus Vistesen, chief eurozone economist at Pantheon Macroeconomics.

Yet despite the increase, factory orders remain well below their levels over the past decade, and were 11.3 per cent lower than the levels recorded in February 2020, before restrictions were put in place to stop the spread of coronavirus, highlighting the amount of ground the German economy needs to regain to fully recover from the impact of the pandemic.

Demand from domestic customers was particularly strong, increasing by more than a third from the previous month. Capital goods orders rose by 45.7 per cent.

Germany’s automotive sector also staged a significant recovery, as orders rose by two-thirds — although the level remained 12.2 per cent below pre-pandemic levels. German industry had already been suffering from the effects of global trade tensions, even before the virus hit.

“The only limiting factor is that order books had already been in a long shrinking process for two years prior to the crisis,” said Carsten Brzeski, chief economist at ING. “These structural issues won’t disappear overnight, but today’s numbers suggest that the industry could catch up with the momentum in the rest of the economy.”

Separate data released on Thursday showed that the rate of Italy’s industrial production output growth slowed significantly in June from the previous month, damping hopes of a continued “V” shaped recovery from the lockdown.

The eurozone’s third-largest economy posted a month-on-month increase in industrial output of 8.2 per cent in June, seasonally adjusted data revealed, outperforming economists polled by Reuters who had expected a rise of 5.1 per cent. 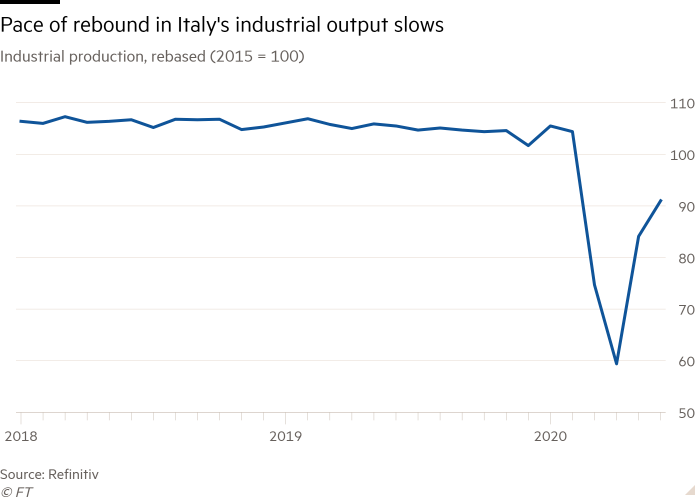 The more modest rise followed a record 41.6 per cent increase in the previous month, when the sector rebounded sharply from the impact of strict lockdown measures in March and April.

Industrial production refers to the output of manufacturing, mining and utilities industries. Although these industries make up a small proportion of gross domestic product, the change in production levels is a good gauge of the strength of overall demand.