Hopes rose in London and Brussels on Sunday that a post-Brexit trade deal could be bailed out, but warnings were issued that the EU and the UK would remain “far apart” on key issues and that talks could get on the line.

British Prime Minister Boris Johnson and European Commission President Ursula von der Leyen agreed in a “constructive” call on Sunday to “go the extra mile” in search of a deal as both sides reported progress on talks . The pound sterling rose in early Asian trade on Monday on the news of extended talks.

However, no deadline was set for the conclusion of the negotiations. British officials admitted they could drag on until Christmas. UK business leaders expressed frustration that companies were unaware of the terms and conditions of trade with the EU on January 1, when the UK’s transition agreement ends.

People close to the negotiations said progress in the talks since Friday has been aimed at cracking what has become the crucial sticking point: the challenge of developing a system that meets the EU’s demands for fair business competition without undermining Britain’s determination to escape the block rules. (FT)

Are you changing your usual vacation plans because of the pandemic? Tell us in our survey.

China is at the center of the UN climate summit China promised to nearly triple its wind and solar capacity over the next decade when President Xi Jinping joined other world leaders at a UN climate summit with new emissions targets. Mr. Xi’s testimony was the most momentous at the virtual event. Renewable energy sources have increased since 2015, but there is still a long way to go. (FT) Banks in the euro area have to resume their payouts Europe’s leading financial regulators are putting the finishing touches on new recommendations to allow the region’s strongest lenders to resume dividend payments within tight limits, ending a nine-month hiatus due to the coronavirus crisis. (FT)

The Fed is ready to continue the crisis bond facility The US Federal Reserve stands ready to issue new guidelines to expand its emergency bond purchase program as it grapples with the need for further monetary rebound to support US economic recovery. Meanwhile, a foreign government-backed hacking group has been spying on email inside the US Treasury Department and a telecommunications agency. (FT, Reuters)

Pakistanis protest against the government Thousands of Pakistanis took to the streets on Sunday defying official advice not to gather to protest the Imran Khan government during the Covid-19 pandemic as public anger over soaring prices and weak economies rises. (FT) 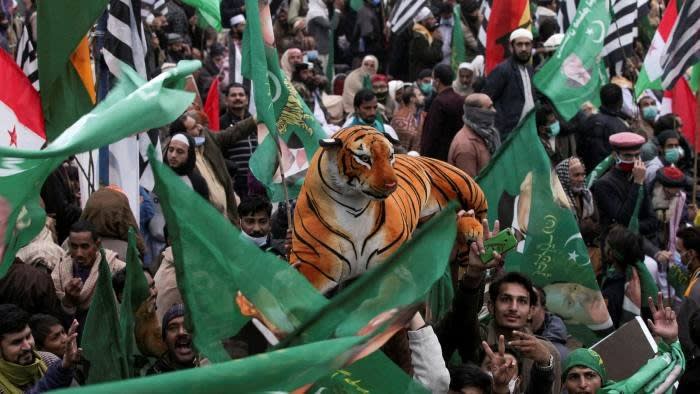 Anti-government protesters march in Lahore. Opposition leaders have threatened to organize a march to Islamabad and paralyze the capital © Mohsin Raza / Reuters

Trump loyalists march against election results Clashes between protesters and police broke out in Washington on Saturday as thousands of Donald Trump supporters rallied against the presidential election the day after the US Supreme Court rejected a Texas-led challenge to the vote. (FT)

Facebook’s India conflicting security concerns The social media company has defied demands to remove Bajrang Dal, a Hindu nationalist organization that has supported violence against minorities in the country, from the platform because of concerns that the move would endanger the safety of its own employees – as well as the business outlook. According to a report from the Facebook security team. (WSJ)

Bank of Japan Tankan survey The central bank will release its business analysis on Monday as smaller businesses continue to suffer from the pandemic. A recovery in exports should, however, boost business confidence. (FT, Reuters)

Inflation data for India The numbers to be released on Monday are likely to be well above the central bank’s target range as the country’s battle against inflation continues. (FT)

PM to address Singapore Lee Hsien Loong will provide an overview of the country’s handling of the pandemic and an outlook for 2021. (Straits Times)

Votes of the electoral college The 538 voters will meet on Monday to officially cast their vote for the next US president. This is how the vote will take place, which has attracted even more attention this year. (FT, NYT)

FT Brexit Briefing: Deal or No Deal? Understand the essentials

This Tuesday, December 15th at 3 p.m. GMT, join an important webinar hosted by seasoned FT journalists to help you understand in 50 minutes what a business and a non-business means to you and your company. Regardless of the outcome, learn how all key areas can be influenced. Register here for free. And here you can register for our Brexit Briefing Newsletter.

Rethink Xi’s “Project of the Century” It didn’t take long for the wheels to break free from the Belt and Road Initiative. What was conceived as the world’s largest development program is unraveled in China’s first overseas debt crisis. (FT) Wanted: pandemic jobs With Covid-19 impacting major highways, hotels and airlines, other sectors are unscathed or even thriving. The pandemic has left a profoundly unequal job market, writes Pilita Clark, who spoke to HR managers looking for the most sought-after jobs this year. (FT)

The Quantum Secret of the Japanese On-Off Olympic Games As with the hypothetical cat of the physicist Erwin Schrödinger, the Olympic Games in Tokyo – which are now planned for the summer of 2021 – are dead and alive in a box that nobody wants to open, writes Leo Lewis. (FT)

Beijing wins points in the game against Washington China’s recent achievements, including a moon mission, reflect competition between the US and the Soviet Union in the Cold War. The moves challenged any efforts by China to bring President-elect Joe Biden to justice. (FT)

Erno Rubik: “The cube has its own voice” The creator of the three dimensional puzzle puts a lot of emphasis on getting rich with Cold War era Hungarians and Art Invention during lunch with the FT feature with our Southeast European correspondent Valerie Hopkins. (FT) 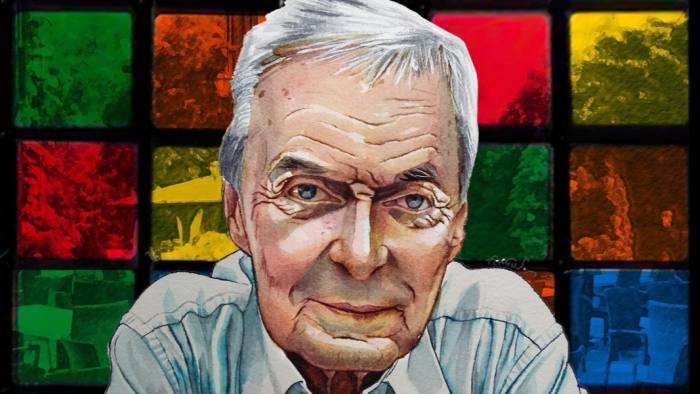 How civilization broke our brains Where do the “Sunday fears” come from? We feel this flood of fear on the Sunday evening before the start of the work week. After all, capitalism exists every other night of the week. The answer could lie in how we structure our time – and lessons from hunter-gatherer societies. (Atlantic)

Spacs are oven-ready offerings that should be left on the shelf The catch with special-purpose acquisition companies – as with so many modern finance companies – comes when a merger is finally closed. Only then do you realize how much these ventures really cost, writes Jonathan Ford. (FT)

“The Paris destinations are within reach” The national climate pledges and legally binding carbon targets have accelerated significantly, which has helped accelerate the warming of the planet. Could this be a turning point for the goals of the Paris Agreement? Some scientists believe it. (FT) The cost of generating renewable energy, such as solar power generated at Yamakura Dam in Ichihara, Japan, is falling. © Carl Court / Getty Images

Payne’s policy: the time for the Brexit trade is running out Can the process be saved after UK-EU negotiations stalled again and UK Prime Minister Boris Johnson warned of a no-deal outcome? Sebastian Payne and his guests discuss developments. Listen to FT.com, Spotify or Apple podcasts.