Pfizer and BioNTech said they would submit their Covid-19 vaccine for emergency approval in the US and EU “within days” after new data showed it was even more effective than previously reported.

The jab was found to have a 95 percent effectiveness rate, which is in line with results released this week by vaccine competitor Moderna. Both shots are expected to be approved before the end of the year, raising hopes that the world may turn a corner in the fight against the coronavirus.

Successful trials of coronavirus vaccines by Western pharmaceutical companies have cut the market capitalization of Chinese rivals by more than $ 13 billion, fulfilling Beijing’s ambitions to lead the global battle against the pandemic.

Meanwhile, global debt rose at an unprecedented rate in the first nine months of the year as governments and corporations launched a “debt tsunami,” according to new research in the face of the coronavirus crisis. (FT)

Should the coronavirus vaccine become mandatory when it is generally available? Tell us in our last poll. 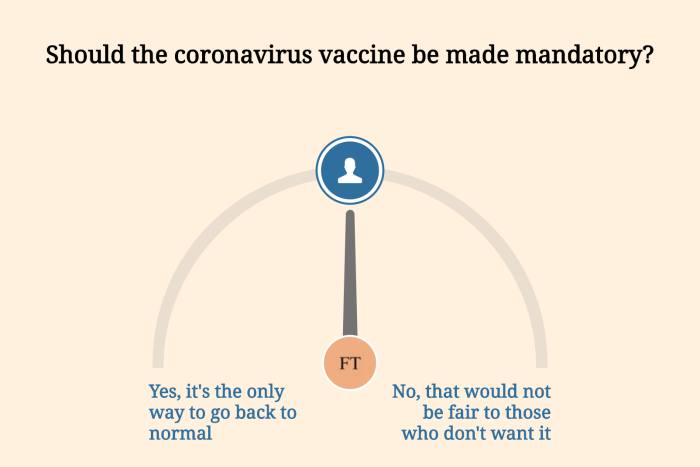 Thai protesters hold a rally after a night of violence At least 10,000 Thai democracy activists surrounded the Royal Thai Police building in Bangkok on Wednesday evening, marking one of the largest gatherings in the wave of unrest in the kingdom. The demonstrators wore inflatable rubber ducks – a new emblem of the youth demonstrations. (FT) 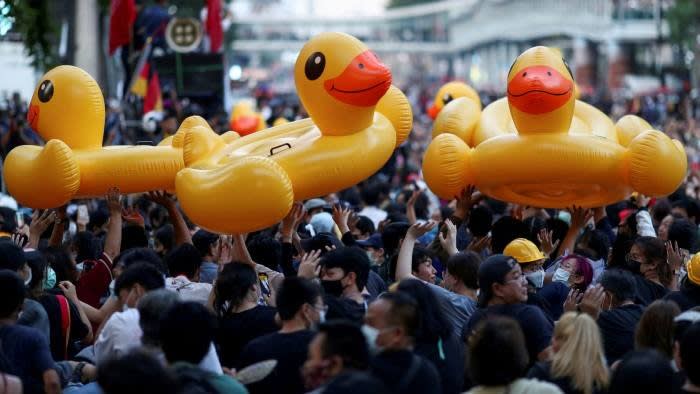 Protesters use inflatable rubber ducks as shields to protect themselves from water cannons. © Athit Perawongmetha / Reuters

Bitcoin rallies above $ 18,000, near all-time highs The digital currency is within striking distance of a record high three years ago, but some analysts warned that further gains would make the price “scream” for a major correction. Is it a boom or a bubble? asks Adam Samson. (FT)

The Indian central bank takes over another regional lender The Reserve Bank of India is in a rush to calm the country’s financial sector after taking over Lakshmi Vilas Bank, a troubled regional bank, in its latest series of bailouts against a lender poised to collapse. (FT) 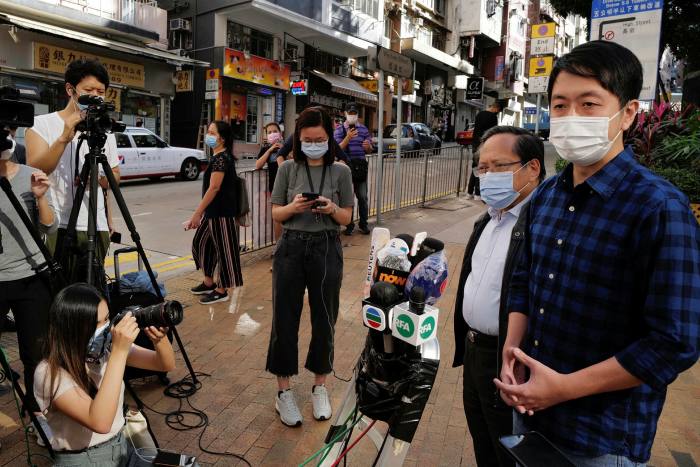 Democratic lawmaker Ted Hui spoke to reporters in front of a police station on Wednesday. © AP

US regulators approve Boeing’s 737 Max to fly again The US Federal Aviation Administration ruled Wednesday that Boeing’s 737 Max may return to the skies so that other regulators can follow suit and airlines can put the aircraft back in their flight schedule. (FT)

Panasonic plans Norwegian battery plant The Japanese group plans to set up its first battery factory in Norway to capitalize on its success in supplying Tesla in the US and to win business from more European automakers. (FT)

Climate experts mock Johnson’s green plan The UK Prime Minister’s new 10-point plan for a green recovery is a long way from what it takes to get the country on track to net zero emissions by 2050, according to climate experts. In the meantime, Keir Starmer has refused to admit Jeremy Corbyn as a Labor MP despite Mr Corbyn’s re-entry into the party. (FT) 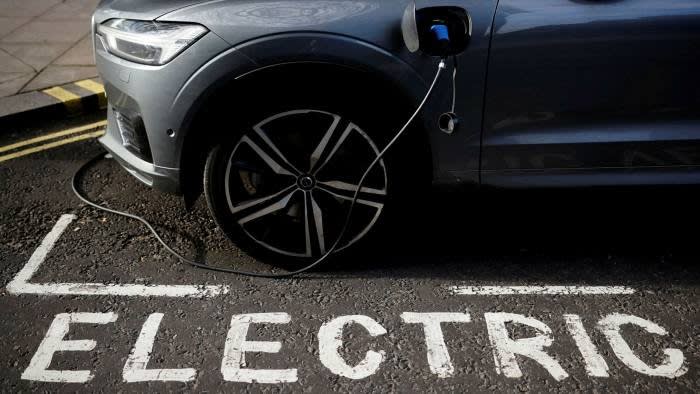 In terms of emissions, the plan is likely to make the biggest difference in transportation. New sales of gasoline and diesel cars and vans will be banned after 2030. © AFP via Getty Images

The Brexit talks will continue The discussions will take place in Brussels, with Boris Johnson still having a hard time as the video conference summit of EU leaders on Thursday – seen by many as the final deadline for sealing a draft Brexit trade deal – approaches.

The Turkish central bank meets Thursday will be the first monetary policy meeting chaired by Naci Agbal, the new governor of Turkey’s central bank, whose appointment on November 7 triggered the departure of the Finance Minister and son-in-law of President Recep Tayyip Erdogan, Berat Albayrak. (FT)

Banks have played a crucial role in channeling government aid to their communities during the pandemic. However, your financial position remains challenging. On Monday, the FT will bring together industry leaders, including Barclays CEO Jes Staley, to discuss the impact of the pandemic on banking. Register here for a free pass.

Why inflation might be on its way back Are we facing a new era of unexpectedly high inflation and not the usual below-target inflation, asks Martin Wolf. Many disagree with this view. But the boy who cried wolf was right last time. (FT) 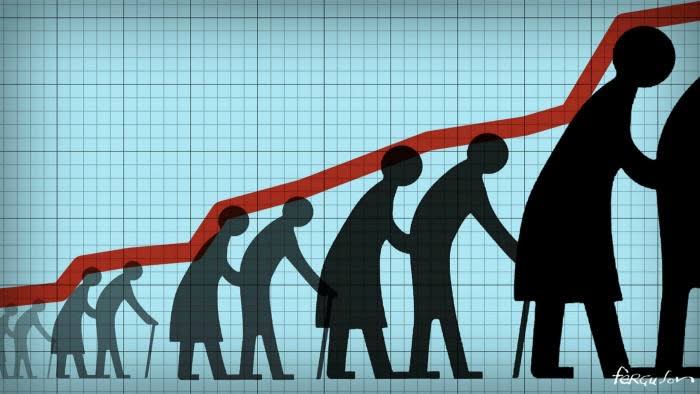 The India that my mother knew is becoming unrecognizable When drafting the Indian constitution, minorities and the disadvantaged were very much considered. But in the India of Prime Minister Narendra Modi, with his right-wing Hindu majority, the protective measures that have been put in place seem weaker than ever, writes lawyer Marina Wheeler. (FT)

The future of antibiotic resistance In the future, even cuts could have fatal consequences. 10 million people die each year from drug-resistant infections. Is that just a projection? FT travels through time with artist Nina Dunn to see in a new video how we can stop the next global health crisis. (FT)

Erdogan’s family drama and the future of Turkey The fact that the country is being hit by a government collapse, which has also been a family drama, is a source of anger and shame for those who once worked with Recep Tayyip Erdogan – and a sign of how the country has changed during that time has his time as president. (FT)

Beauty brands related to abuse in the palm oil industry Indonesia and Malaysia produce 85 percent of the world’s palm oil, which is used in the supply chains of global brands such as L’Oréal, Unilever, Procter & Gamble, Avon and Johnson & Johnson. An AP investigation exposes the brutal treatment of women who work in oil production. (AP)

Training of drivers for the border after Brexit At a truck park in Ashford, Kent, language barriers and a lack of information hamper preparations for the new UK border as carriers are caught in the crosshairs. Ireland’s Prime Minister said the UK and the EU could see “landing zones” for a free trade agreement, raising hopes for an agreement. (FT) 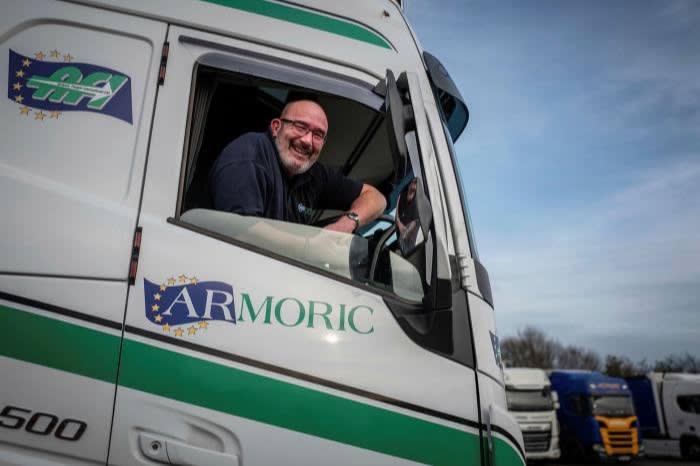 Covid-19 shakes the most expensive cities in the world According to the Economist Intelligence Unit’s annual survey, Hong Kong, Zurich and Paris now top the list of the highest cost of living. Singapore and Osaka have fallen in the rankings, while most Chinese cities have increased. (BBC)

Luxury brands weave inclusiveness into their fabric High-end houses like Prada and Gucci are hiring diversity leads to address a lack of representation in their businesses. Luxury is well represented on our second annual list of Diversity Leaders, but observers say the sector still lags behind its peers in the broader fashion space. (FT)

The dissolution of the Ant IPO Jack Ma’s Ant Group IPO would have been the largest in history: it was expected to raise $ 37 billion on a valuation of $ 316 billion. But just days before going public, China canceled it. FT’s Ryan McMorrow and Hudson Lockett share what led Beijing to pull the plug and what it means for China’s private sector. Listen to FT.com, Spotify or Apple podcasts. 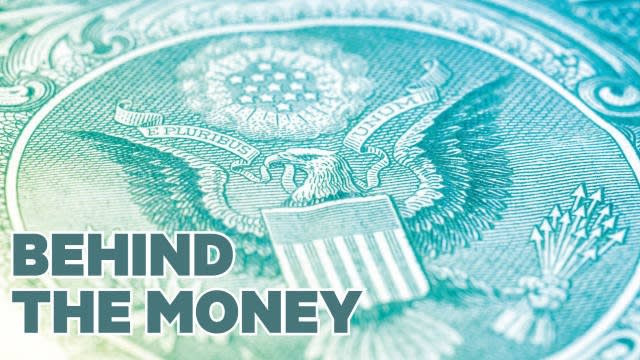