Donald Trump called for votes to be halted in several swing states while the US waited for the results of a handful of battlefields that will determine the presidential election.

As of Thursday, Democratic challenger Joe Biden was within six votes of the electoral college, while Trump’s thin lead appeared to be narrowing in two swing states, Georgia and Pennsylvania.

Joe Biden said he had “no doubt” that his campaign won the 2020 US presidential election, but urged the American public to “stay calm” while the remaining votes were counted.

Meanwhile, the Trump campaign has pushed a multi-state legal challenge on the results with mixed success. The campaign brought cases in Pennsylvania, Michigan, and Georgia, and said the same would be the case in Nevada.

Authorities in the US are preparing for further protests after protesters took to the streets in cities including Chicago, Denver Newspaper, Los Angeles, Minneapolis, New York, Philadelphia, Pittsburgh, Seattle and Washington DC on Wednesday night.

In Arizona, dozens of Trump supporters, including some with guns, demonstrated outside a counting center on Wednesday evening. The Associated Press, which the Financial Times relies on for election data, and Fox News have called the state for Mr Biden, but other U.S. networks have determined it is too close to call him.

Wall Street stocks rebounded and the dollar weakened as ballots continued to be counted.

Stay tuned with the FT results page, updated with the latest decisions and our live coverage here. 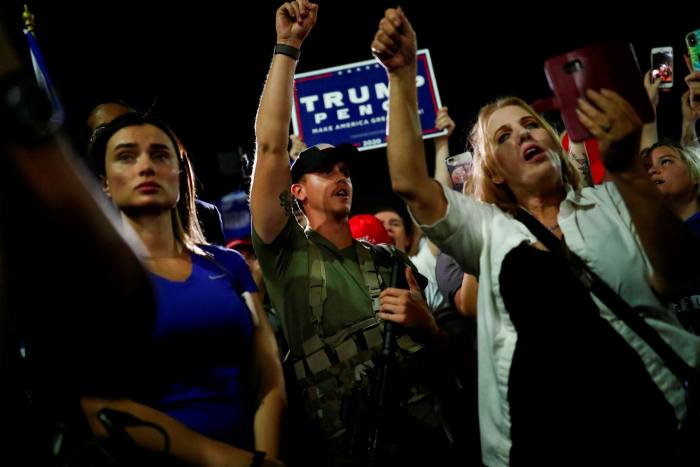 Joe Biden made it Coronavirus a centerpiece of his campaign, but it has become clear that voters have not overwhelmingly opposed Donald Trump’s handling of the pandemic.

Mr Trump’s relative weakness in the rust belt signals this protectionist politics were not a political panacea for him, writes James Politi in Trade Secrets.

A law professor from Stanford University noted that most of Mr. Trump’s legal challenges to the results appear to be “unfounded and unfortunate”. (FT) Gig economy company like Uber and Lyft, California voters gave them a mandate to reformulate labor laws in the United States. It is a loss not only for workers, but also for good policy making, writes our editorial team.

The Ant Group IPO has been delayed for six months Ant Group’s IPO could be delayed for at least six months and its valuation slumped sharply after Beijing abruptly halted its trading debut this week, people directly involved in the deal said. Our Big Read examines why Beijing brought Jack Ma under control. Alibaba, which has a 33 percent stake in Ant, topped third-quarter sales estimates on Thursday. (FT, Reuters) 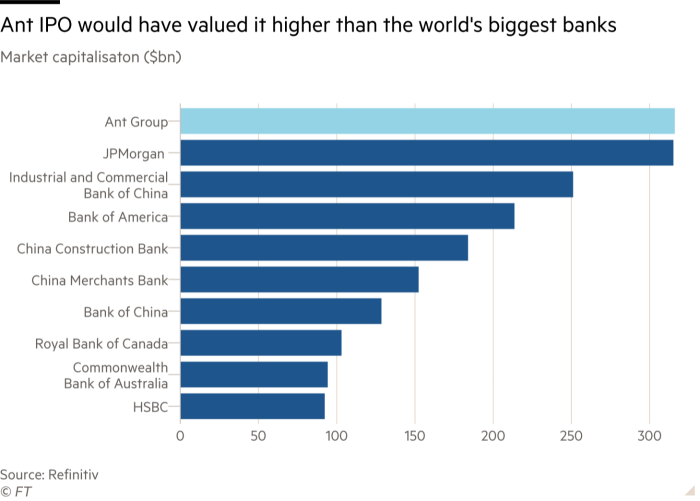 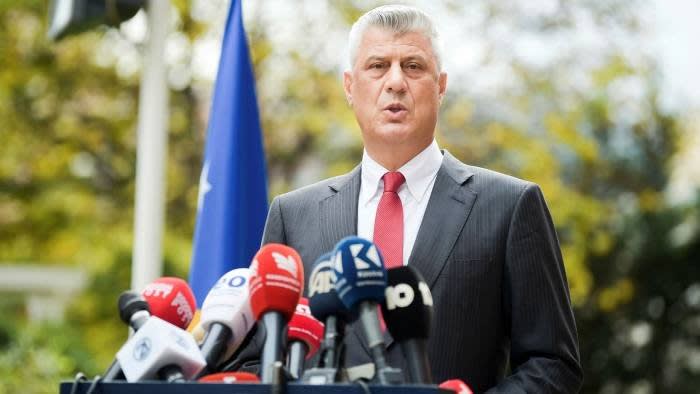 Hashim Thaci: “To defend the integrity of the Kosovar presidency. . . I am resigning from the position of President of Kosovo. © Stringer / EPA-EFE / Shutterstock

ByteDance is targeting a valuation of $ 180 billion TikTok’s parent company is reportedly in talks to raise $ 2 billion, which would bring the valuation to $ 180 billion before some of its companies are listed in Hong Kong amid attempts to ban TikTok in the US cancel. (Bloomberg)

The Brexit divide remains EU and UK negotiators will try to work out a trade deal next week, with both sides warning that very serious differences remain. The next few days will be decisive for whether you really want a deal, writes Peter Foster in our Brexit briefing. (FT)

Elections in Myanmar Aung San Suu Kyi’s National League for Democracy will seek a new five-year mandate in the November 8 elections. It is widely expected to win. The election was criticized as undemocratic. (FT, economist) 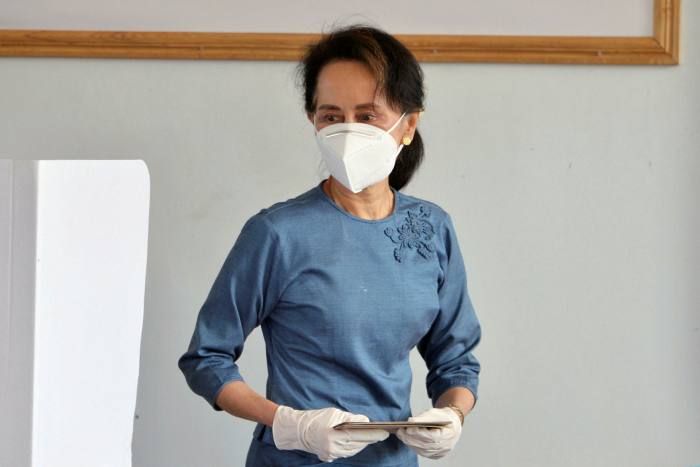 Aung San Suu Kyi will cast a pre-vote at a polling station in Naypyidaw ahead of the November 8 general election. © AFP via Getty Images

Protests against democracy in Thailand Activists in Thailand are expected to gather on Sunday to petition King Maha Vajiralongkorn after rejecting parliament’s plan to form a committee to ease political tension. (Straits Times)

Japan teaching the world about ESG The world can learn from Japan’s practice of gapponshugi, or ethical capitalism, writes Jim McCafferty of Nomura. For Westerners focused on ESG investing, Japan offers a model for shareholders to coexist with other stakeholders. (FT)

Biden risks a lame duck The lesson from Tuesday’s record turnout and sustained vote is that America is bitter, energetic, and almost evenly divided, writes Edward Luce. At best, President Biden would have an ambiguous mandate. The question is what he could do with it. (FT)

China is shaping a new US economic era Regardless of who wins the US presidency, the country stands ready to empower domestic industries that are vital to national security and global status. It’s a bipartisan departure from freer markets driven by the rise of China. (Politico) 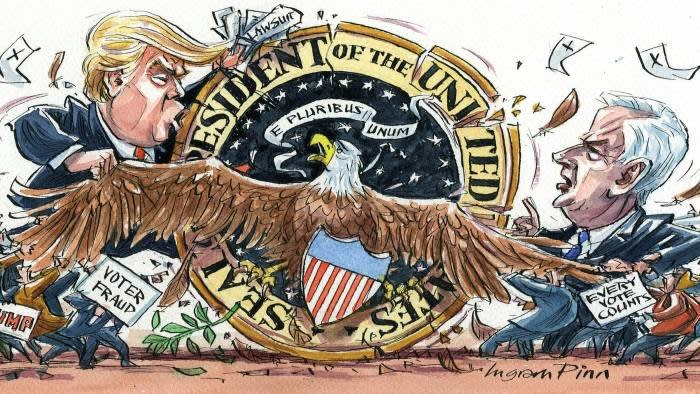 Chinese censors also control the world of celluloids Like so much in China, films are increasingly exposed to the ever-increasing influence of the Communist Party under Xi Jinping, writes Henny Sender. (FT)

VW boss is fighting to keep the electric dream alive As European governments battle a resurgent pandemic, Volkswagen boss Herbert Diess is fighting for his own battle: to turn the world’s largest automaker into an electric heavyweight – and ensure its electric future is lucrative. (FT) 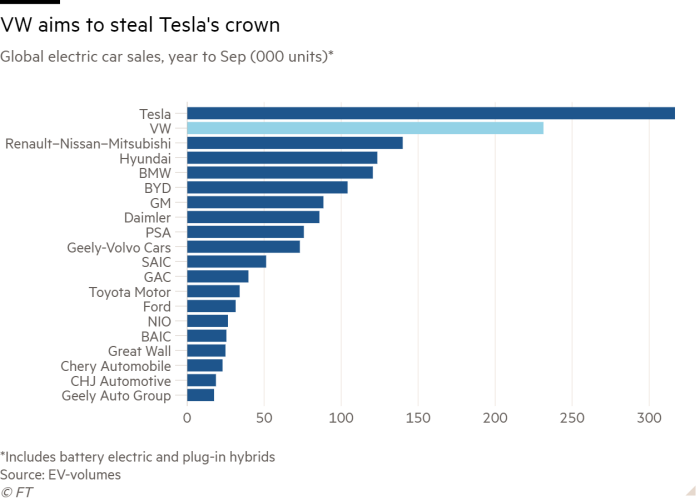 Scolding could be the balm the world needs While scolding tends to have negative connotations, it is good for us to shut up, writes Jemima Kelly. If it can be beneficial to physical and mental health, maybe we should all indulge in a little more – now, in the midst of a pandemic, more than ever? (FT)

How the markets react to the early results FT’s Robert Armstrong analyzes the market’s reaction to early US election results and explains why blue wave reflation trading is off the table, bank stocks are falling and technology stocks are rising.

Video: US Elections: How Markets Respond to Early Results Charts That Count