The Ant Group is expected to raise more than $ 34 billion after the stock price is fixed as part of its initial public offering. With that, the Chinese payments group is well on its way to outperform Saudi Aramco as the largest public listing of all time.

The financial technology company, controlled by Alibaba's billionaire founder Jack Ma, will sell shares on a dual listing in Shanghai and Hong Kong. It is expected to make its market debut on November 5th.

Ant said it will sell shares for the portion of Shanghai that trades on the tech-driven Star Market at Rmb68.80 ($ 10.26) each. This emerges from documents released by the city's stock exchange on Monday evening. Ant also said he has set the price of his Hong Kong shares at HK $ 80 (US $ 10.32).

Together, the sale of the roughly 3.34 billion shares, which make up 11 percent of Ant's total outstanding shares, will raise $ 34.4 billion, surpassing the $ 29.4 billion raised by oil major Saudi Aramco in 2019 . The Shanghai segment of Ant sales alone will bring in Rmb 114.9 billion (US $ 17.2 billion), more than double the Rmb 53 million raised by chip maker SMIC in July.

How has your life changed due to the pandemic? FT commentators discuss how they believe they handled the virus and share how they have been affected. Follow our live coverage.

Thai protesters march on the German embassy Several thousand Thais marched into the German embassy in Bangkok on Monday to urge Berlin to open an investigation into King Maha Vajiralongkorn for conducting state affairs on German soil. (FT)

US Senate upholds Barrett in the Supreme Court Amy Coney Barrett is set to be ratified by the U.S. Senate and give President Donald Trump his third Supreme Court Justice just a week before election day. Regardless, our editorial team writes that given the nature of US democracy on the ballot paper, choosing between Donald Trump and Joe Biden "shouldn't be difficult". (FT)

ByteDance discusses listing the video app Douyin The TikTok owner is in early talks to list its Chinese short video app Douyin in Hong Kong, according to those familiar with the situation. Meanwhile, the U.S. government rejected TikTok's request to stop the government's ban from coming into effect on November 12. (Reuters, SCMP)

PM: Japan should be climate neutral by 2050 Yoshihide Suga, Japan's new prime minister, has vowed the country will be carbon neutral by 2050, which will require a major change in energy policy in his first keynote address at a new state parliament session. (FT) 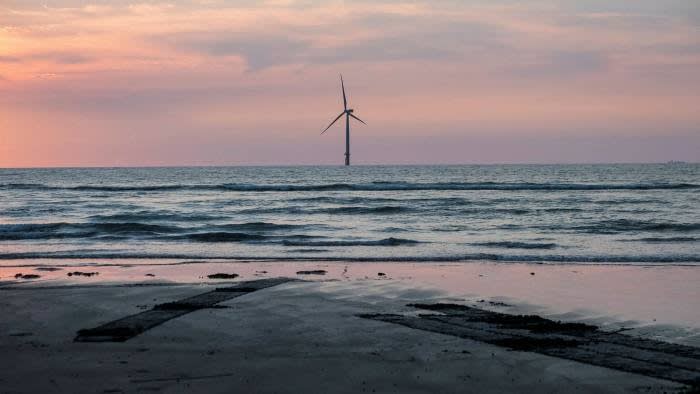 The truce between Nagorno-Karabakh is dissolved A US-brokered ceasefire in the disputed region appeared to have collapsed on Monday when Armenian and Azerbaijani forces accused each other of artillery strikes within minutes of the ceasefire taking effect. (FT)

Start private jets More and more affluent aviators are switching to private jets to reduce the risk of commercial passengers catching coronavirus. How to spend Take a closer look at these first-time private flyers. (FT, HTSI) 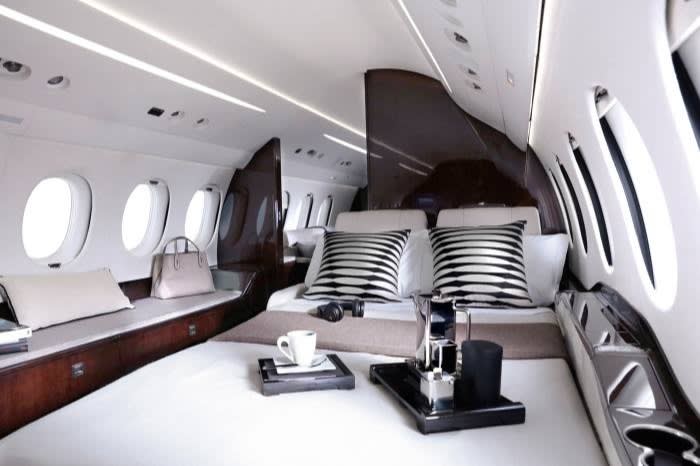 The cabin layout with sleeping accommodations can be adjusted. © Dassault Aviation

Summary of results Earning season is well underway, and the tech giants are likely to grab investor attention for most of the week, starting with Microsoft on Tuesday. Also noteworthy: HSBC, the Spanish lender Santander, the Italian company Mediobanca, the pharmaceutical company Novartis and the oil company BP also report on Tuesday. (FT)

Attend the FT November 11-13 for live online debates and interactive networking sessions. More than 150 leaders from politics, business and finance exchange thoughts about where the world is going next. Speakers will include US Secretary of Commerce Wilbur Ross, Bank of England Governor Andrew Bailey, and Carmen Reinhart, Vice President and Chief Economist of the World Bank Group. Click here for your free registration.

Jeff Bezos versus Mukesh Ambani America's and India's richest men battle it out over retailer Future Group, drawing the lines between Amazon and Reliance Industries over India's booming e-commerce market, which is said to be worth $ 86 billion by 2024. (FT)

All the President's debts Nearly all of Donald Trump's US $ 1.1 billion debt is covered by real estate, a sector that has been hard hit during the pandemic. Robert Armstrong and Joe Rennison have made a deep dive into the president's finances. Approximately $ 900 million is due in a possible second term. (FT) 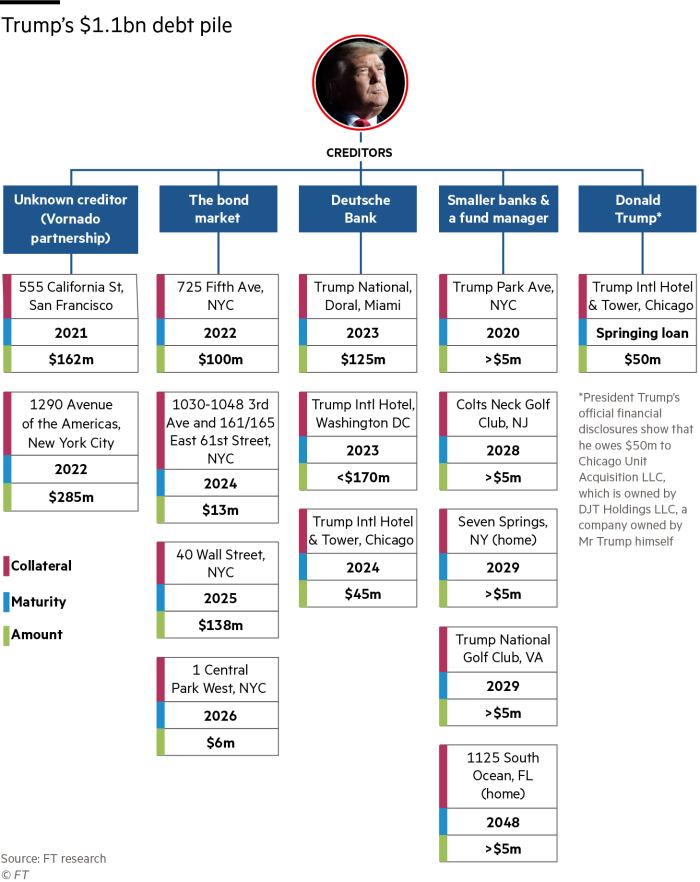 Africa's indebtedness to China is “a great drain”. As Zambia approaches Africa's first default in decade, and pressure on other debt-stricken countries during the pandemic, the crisis has highlighted the fragmentation of Chinese lending and Beijing's reluctance to fully align with global debt relief plans. (FT)

China's Covid triumph could be premature As China's leadership meets this week to plan for the years ahead, its ability to openly discuss the nation's problems will be hampered by the thoughtful personality cult that has grown around President Xi Jinping, writes Gideon Rachman. (FT) 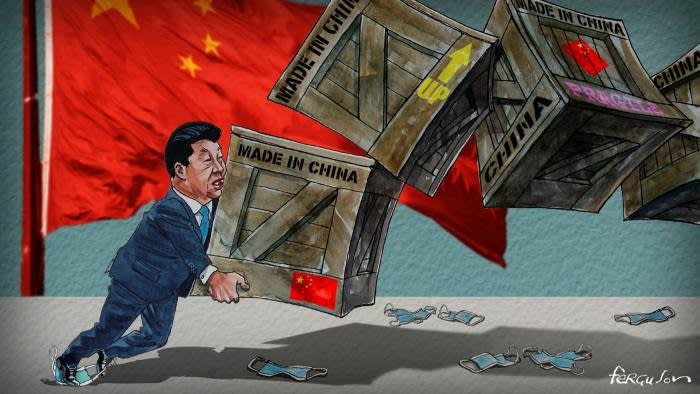 Lessons for markets in the Covid era Value investing is on its worst run in at least two centuries after the pandemic exacerbated a decade of battles over a popular strategy that consists of buying cheap stocks in often unfashionable industries. Mohamed El-Erian is collapsing, which means the postponement of austerity measures for the markets. (FT)

Importing a Florida County Mr Trump argues that he can revive the pre-Covid low unemployment rate while Mr Biden will destroy the recovery. Pinellas County is of paramount importance in Florida, where the battle for the economy has been particularly tough. Meanwhile, Mr Biden has outsmarted Mr Trump in some of the richest areas in the US. (FT, NYT) 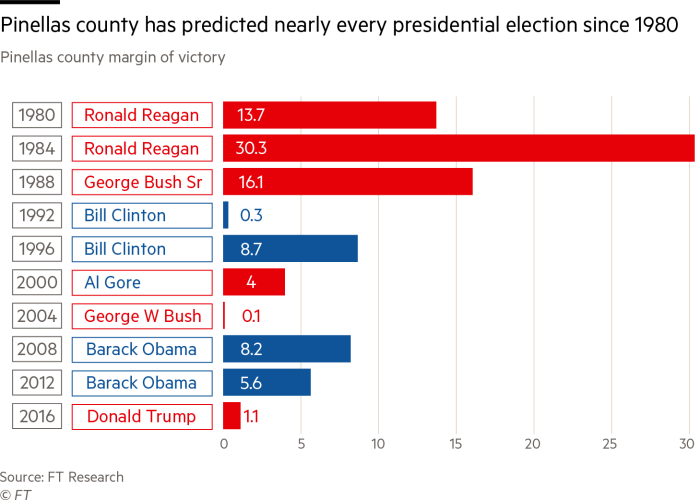 UAE versus Turkey Within 10 months, a conflict between Turkey and the United Arab Emirates has become the Middle East's most poisonous feud, extending from the oil-rich Gulf to the Horn of Africa to the frontline of the Libyan civil war and facing one of the United States' closest Arab partners a NATO member. (FT)

Relax over the moon Last week Nasa played up an upcoming announcement about the moon. It turned out that they had found evidence of water there. Here's why it's a significant, but not earth-shaking, discovery – and why that's perfectly fine. (Atlantic)

Edward Luce is the US National Editor and Columnist for the Financial Times. He is co-author of Swamp Notes, a bi-weekly newsletter about money and power in Trump's America, with Rana Foroohar (subscribe here). Ed previously headed the Washington and South Asia Bureau and is the author of three books, including The Retreat of Western Liberalism.

What's an interesting fact we should know about you? Early in my FT career, I worked for a year as a speechwriter for then US Treasury Secretary Larry Summers. It was a strange and somewhat daunting task for a foreigner to suddenly show up and do – but immensely edifying. As a journalist, it helped me a lot to taste the life on the other side of the route.

Tell us about your newsletter, Swamp Notes: It's talkative, lightly edited, and Rana and I are born from either end of the Acela Corridor (which connects Washington to New York). Above all, we have complementary interests and a pleasant chemistry (which is regularly cultivated with Zoom cocktails during Covid). It's fun and hopefully it shows.

What advice have you received that you are still thinking about? Nothing is ever as good or as bad as it seems (a saying that all journalists should take to heart).

What was your strangest interview? With Imelda Marcos, the former co-dictator of the Philippines, at lunch in a restaurant in Manila, where she talked about her world's best shoe collection.