China is promising preferential access to its Covid-19 vaccines to countries across Asia, Africa and Latin America, as Beijing uses inoculations as a new tool to bolster its ties with nations neglected by the US.

Wang Yi, China’s foreign minister, has spearheaded the effort, pledging that Malaysia, Thailand, Cambodia and Laos will be among the “priority” recipients of Chinese vaccines. Beijing aspires to be a global vaccine supplier with four Chinese products now in phase 3 trials, the final stage intended to ensure safety and effectiveness before approval for public use.

Although US pharmaceutical groups including Johnson & Johnson and Moderna also have advanced vaccines in development, Washington has shown no interest in helping to distribute them overseas.

“The United States has ceded the field to China in terms of bilateral vaccine deals in south-east Asia,” said Aaron Connelly from the International Institute for Strategic Studies, a think-tank.

Meanwhile, the cost of shipping goods from Asia to the US has soared in the past month as American companies seek to restock depleted inventories ahead of the holiday season and prepare for the pandemic to worsen over the winter. (FT)

The second wave of Covid-19 appears to be less lethal. Follow the latest with our coronavirus tracker.

Abu Dhabi fund drops 1MDB suit against Goldman One of Abu Dhabi’s sovereign wealth funds has dropped a lawsuit alleging Goldman Sachs bribed its officials as part of a “massive global conspiracy” that led to billions of dollars being embezzled from Malaysia’s 1MDB. (FT) 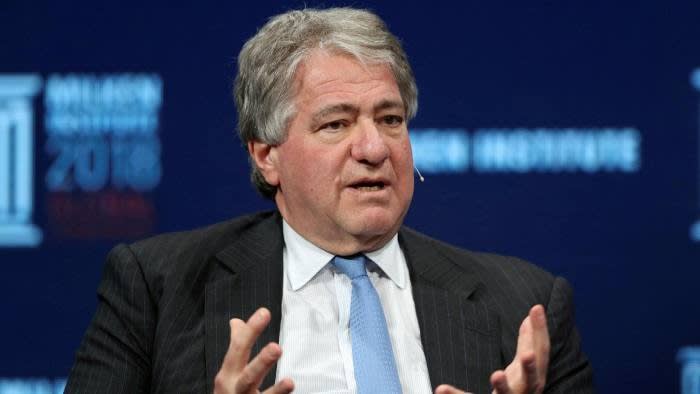 US presidential campaign cash Donald Trump’s campaign began October with just $63.1m cash-on-hand, a sign of its financial struggles. Joe Biden’s campaign began the month with almost three times as much in the bank. Here’s what the Biden team is spending on. Barack Obama has hit the trail for his former vice-president. (FT, AP) 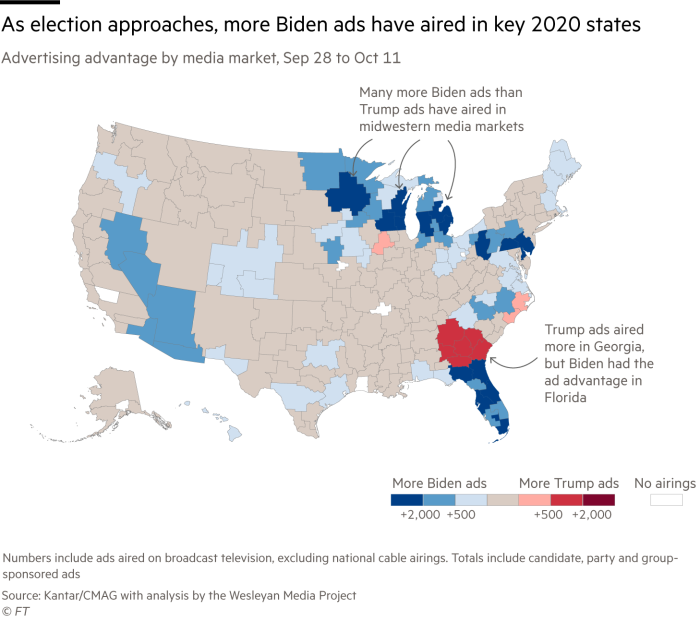 Purdue Pharma agrees $8bn US settlement The opioid maker has agreed to a criminal and civil settlement with the US justice department potentially worth more than $8.3bn in connection with its role in fuelling the US opioid epidemic. Settlement documents include emails in which the company’s Sackler family owners fretted over threats to their wealth. (FT, Reuters)

US to host Armenia-Azerbaijan conflict talks The Trump administration is seeking to mediate a solution to the deadly conflict in Nagorno-Karabakh as it tries to pull off a foreign policy victory ahead of next month’s US elections. (FT)

Growing outrage in Nigeria Unrest spread across Lagos, as outrage escalated over a violent crackdown on peaceful demonstrators against police brutality that left at least 30 people injured and reportedly multiple people dead. Weakness have been exposed at the top of the government, Kingsley Moghalu, former presidential candidate and deputy governor of the Central Bank of Nigeria says. (FT) 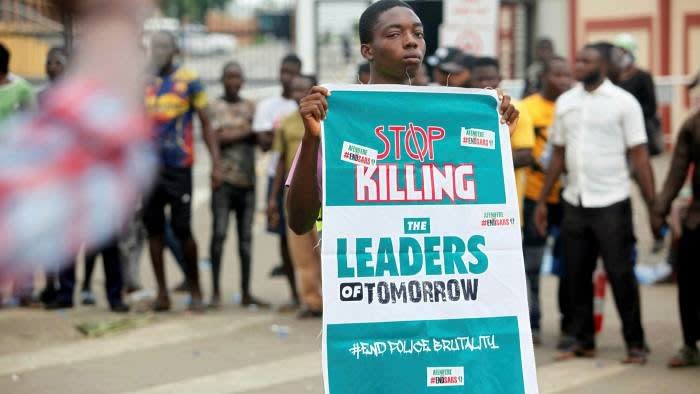 Central banks Policymakers in Turkey and Israel meet on Thursday, but no change is expected. The one-week repo rate stands at 10.25 per cent in Turkey, while Israel’s base rate is at 0.10 per cent. (FT)

Amy Coney Barrett vote the US Senate justice committee will vote on the judge’s nomination to the Supreme Court on Thursday. This week’s 4-4 Supreme Court decision that allowed a Pennsylvania court order regarding mailed ballots to be left in effect is an indicator of how the balance of power could tip if Barrett joins the court. (USA Today, AP)

Join Peter Spiegel, Lauren Fedor and Michael Peterson from the Peter G Peterson Foundation for the next instalment of the FT’s New Economic Reality series. Register and tune in on October 26 at 12pm EST.

Retirement worries Another day, and another survey arrives about the dwindling retirement prospects of the over-50s (trigger warning, if that’s you). Some may even be forced to resort to loans from their children, Claer Barrett writes, as intergenerational finances become a two-way street. (FT)

Trump’s Chinese business pursuits Donald Trump’s tax records that were obtained by the New York Times reveal that China is one of the three foreign countries (the other two being Britain and Ireland) where the US president has a bank account. He spent a decade trying, unsuccessfully, to win business in the Asian country. (NYT)

A chance to reframe antitrust debate The Google case proves that Big Tech’s dominance demands a rethink of how competition rules are applied, our editorial board writes. What’s next for the case? It’s likely “going to be loud, confusing and will most likely drag on for years,” the New York Times’s Shira Ovide says. (FT, NYT) 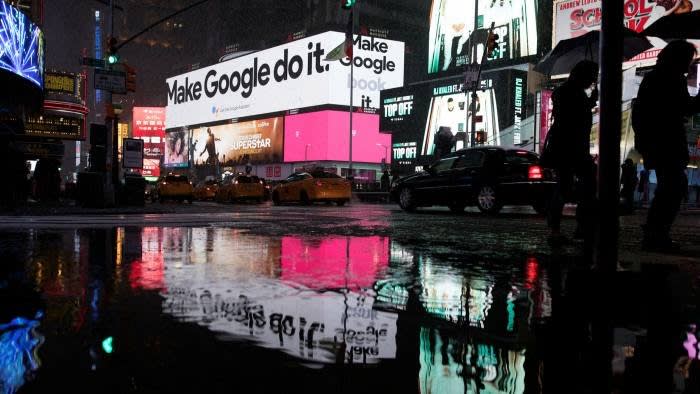 How not to reform Indonesia The country’s new “omnibus” law was created in an effort to encourage investment and make it easier to do business. The goal is admirable, but in pursuing it President Joko Widodo is cutting worker protections at a time when they’re needed most. (The Economist)

Ikea seeks to disrupt itself The world’s largest furniture retailer is rolling out a bewildering number of experiments such as renting out furniture to students and selling second-hand sofas. If scaled up, the experiments would potentially uproot a business model that the chain has followed faithfully for seven decades. (FT) 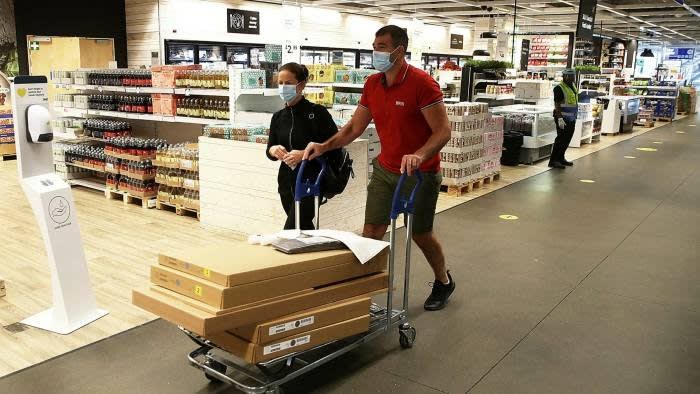 Shoppers at the Ikea store in Tottenham, London. Its new strategy of greater experimentation comes as the group faces increasing competition from online retailers such as Amazon © Getty Images

US Republicans must make peace with the state The mistrust of government that has defined the party since the 1980s is a liability, writes Janan Ganesh. Meanwhile, Donald Trump is wooing US farmers with record subsidies to make up for US-China trade war pain. (FT)

Tesla’s move into mining Elon Musk’s plan to move into lithium production is seen by industry insiders and observers as more of a ploy to ramp up output than competitive threat to established producers. They say the carmaker’s plan is unlikely to bear fruit for years. (FT)

Executive MBAs defy pandemic panic Coronavirus has severely hit human health and economic growth, but executive MBA alumni and courses emerged from the initial peak of the crisis in robust shape, according to data from the FT’s latest survey. Plus, top US business schools are seeing a surge in applications. (FT, Bloomberg)

Why Wall Street turned Democrat The FT’s US finance editor Robert Armstrong asks if the recent stock market rally — driven partly by polls favouring a Joe Biden victory in the US presidential election — is a more sinister sign of a growing asset bubble. Meanwhile, some investors are opting for the ‘do nothing’ trade ahead of US election.