China’s economy expanded 4.9 per cent year on year in the third quarter as industrial growth powered the country’s recovery from the coronavirus pandemic.

The expansion in gross domestic product missed expectations, but was well ahead of a 3.2 per cent increase in the second quarter and represented a sharp turnround from a historic decline at the start of the year.

The recovery in the world’s second-largest economy, which has been stoked by a state-backed industrial boom, now shows signs of extending to consumption at a time when global growth remains under severe pressure.

Industrial production in China leapt 6.9 per cent in September — its highest level this year and the same rate as in December before the coronavirus outbreak. (FT)

Ant gets green light for HK IPO The Chinese payments group has received approval from regulators for the Hong Kong leg of its $30bn initial public offering, teeing up the world’s biggest stock market debut. Alibaba, meanwhile, is spending $3.6bn to buy a controlling stake in one of China’s top supermarket operators. (FT)

The Ant Group mascot is displayed at the company’s headquarters in Hangzhou, China. © Bloomberg

US charges Russians over hackings The US has charged six Russian military intelligence officers with hacking targets including Emmanuel Macron’s political party, the International Olympic Committee and the UK government lab that investigated the poisoning of Sergei Skripal. (FT)

Thailand takes action against media groups Thai police have opened an investigation against four websites and a Facebook page in an effort to block what they described as false news about the country’s protest movement. In a special session, the cabinet on Tuesday will consider recalling the parliament to ease the escalating political conflict. (FT, Bangkok Post) 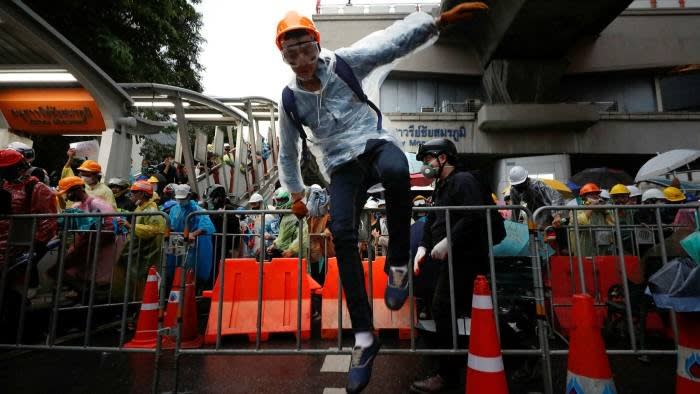 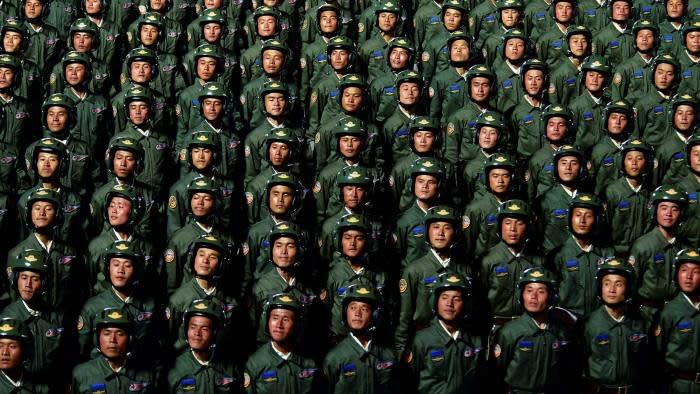 ‘Technical issue’ halts trading across Europe Exchange operator Euronext halted equities and derivatives trading in several key European markets on Monday. The company blamed a “technical issue” for the outage. Later, US stocks slid as coronavirus cases continued to rise and a deadline on US stimulus talks loomed. (FT)

China threatened American detentions Beijing officials told the Trump administration they could detain American citizens if the US Department of Justice proceeded with cases of arrested Chinese scholars who are members of the Chinese military, American intelligence officials said. (NYT)

US election early voting In-person voting starts in Wisconsin, Hawaii and Utah on Tuesday. Mr Trump won in Wisconsin by a small margin in 2016 but polls show the state is leaning towards Mr Biden, by six points.

Earnings round-up Investors will be watching Netflix’s results on Tuesday for updates on its membership growth after a slowdown in the second quarter. UBS, P&G, Lockheed Martin, Volvo, and Snap will also issue results on Tuesday. (FT)

WHO chief: Covid-19 needs to be a turning point Universal health coverage is the best way to insure against shocks such as coronavirus, writes Tedros Adhanom Ghebreyesus, director-general of the World Health Organization. Preparedness is also pivotal. (FT) 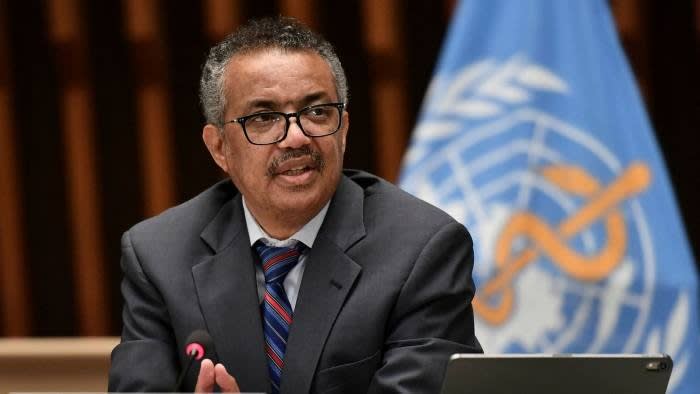 Tedros Adhanom Ghebreyesus: ‘The pandemic has brought to the fore the inequities so many people around the world face today in health’ © AFP via Getty Images

A distracted US is dangerous for Taiwan The idea that a US election can be shaken up by an “October surprise” is a well-worn staple of political commentary. Less discussed is the danger of China taking advantage of political confusion in the US to make a move on Taiwan, writes Gideon Rachman. (FT)

An interview with Alexei Navalny Speaking in Berlin, with intubation scars visible on his neck, the Russian opposition leader said his surviving Russia’s recent assassination attempt has made him “more humane, maybe even sentimental . . . It is good for a politician to look into the face of death,” he said. (The Economist)

Brexit stalks the fields of Flanders post-Brexit export tariffs, quotas and customs requirements would hit Belgium’s Dutch-speaking north, one of the regions most closely integrated with the UK for centuries, which trades fruit and cutting-edge industrial machinery and chemicals. For post-Brexit Britain, the Microsoft model of reinvention is instructive, writes Robert Shrimsley. (FT) 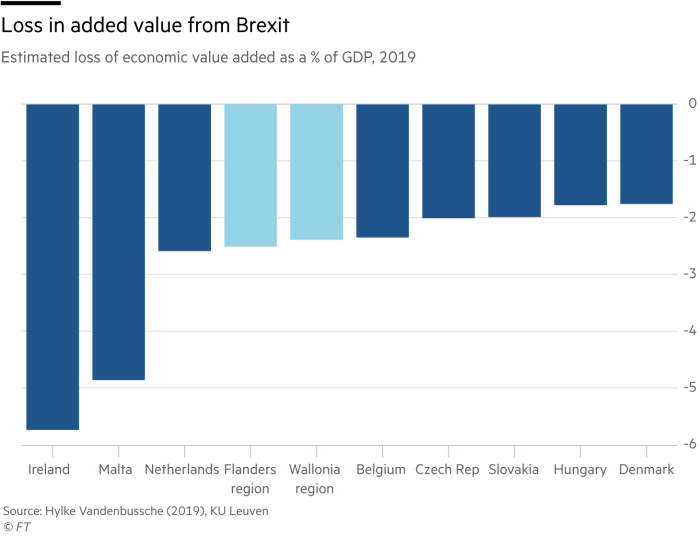 China’s crackdown on the Uighurs A new book out by Sean Roberts, an anthropologist at George Washington University, is one of the first books to concisely explain how and why the Communist party under President Xi Jinping has embarked on an all-out war on Uighur culture. (FT)

Where Italy’s politicos lunch in style Rome’s restaurants have long provided the setting for political deals, betrayals and gossip. The three-course boozy lunch is alive and well for power brokers in the Italian capital, writes Rome correspondent Miles Johnson. This is part of a new FT Globetrotter guide launching this week. (FT) 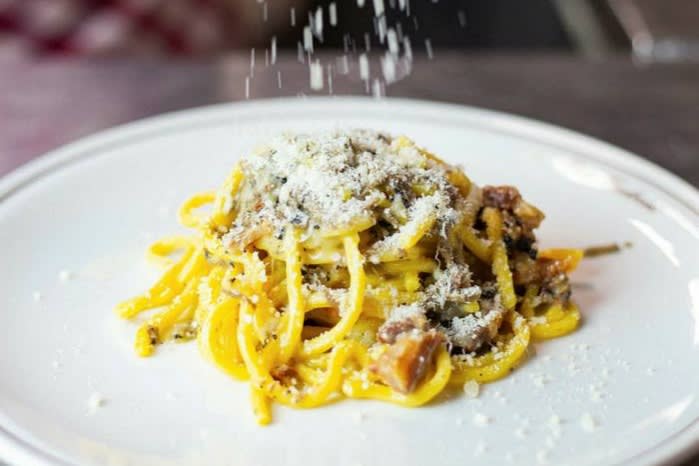 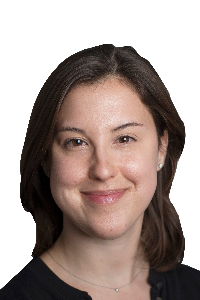 Lauren is the FT’s Washington correspondent. She covers US politics, and has spent more than a year focused on the upcoming presidential election. She was previously a breaking news reporter and edited UK news and technology stories for the FT in London. Add Lauren to authors you follow on myFT.

What is a US election storyline that you’re especially interested in?
I have been keeping a close eye on key congressional races that could determine the balance of power in Washington for years to come. I recently travelled to South Carolina — my first reporting trip in seven months — for a story on Lindsey Graham, the longtime Republican senator in the fight of his political life against Jaime Harrison. Harrison, a 44-year-old Democrat, has raised more money than any Senate candidate in US history.

What FT podcasts/newsletters would you recommend and why?
I always enjoy chatting with Marc Filippino for the daily FT News Briefing. Marc offers listeners a concise but authoritative round-up of the day’s top stories. I am also a regular contributor to Long Story Short, a Friday newsletter in which FT journalists share their favourite reads from the week. It is a brilliant way to catch up on what you might have missed, particularly from our columnists and feature writers. You can sign up here.

What do you miss most about your pre-pandemic life?
Travel! I expected to spend most of 2020 on the road. Instead, like many political journalists, I have had to find new ways of reaching voters and expanding my network of contacts while staying healthy and working from home.

What movie have you seen recently that you’d recommend?
After Ruth Bader Ginsburg died last month, I rewatched RBG, the Oscar-nominated documentary about the liberal icon’s extraordinary life. The film also offers a crash-course in contemporary US legal issues and is a must-watch whether or not you have been following the mad-dash to confirm Donald Trump’s nominee to replace Ginsburg, conservative jurist Amy Coney Barrett.