The total value of China’s stock market has climbed to a record high of more than $10tn, as the country’s accelerating economic recovery propelled it past the previous peak hit during an equities bubble five years ago.

The market capitalisation of all shares listed in Shanghai and Shenzhen hit $10.08tn according to Bloomberg data compiled on Wednesday based on the previous day’s close. The benchmark CSI 300 closed 0.7 per cent lower on Wednesday.

That is above the $10.05tn pinnacle hit in June 2015 immediately before a historic rout sparked by a crackdown on leveraged trading, which resulted in the Chinese market plunging by half. But analysts said despite this year’s rally, stocks are less frothy than during the bubble of 2015, when retail traders drove valuations to eye-watering heights.

“Investors are looking for growth and finding it very scarce elsewhere — so they see an enormous amount of opportunity in China,” said Craig Coben, co-head of Asia Pacific global capital markets at Bank of America. (FT)

Thai protesters surround Government House Thousands of protesters broke through police cordons and surrounded Thailand’s seat of government on Wednesday, marking a symbolic moment in their three-month campaign against the establishment. (FT) 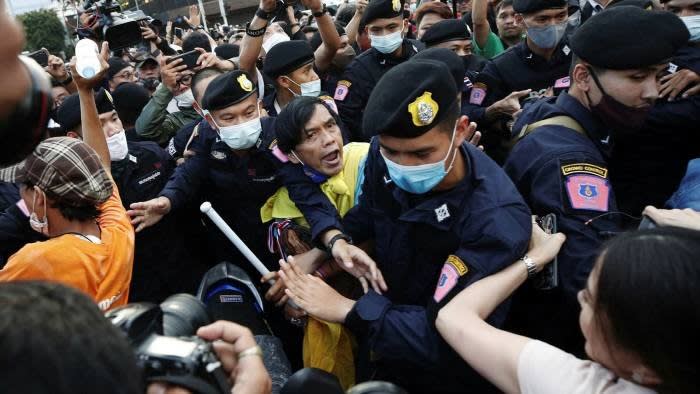 Police try to separate Thai royalists, in yellow, from pro-democracy protesters during an anti-government protest in Bangkok on Wednesday © Rungroj Yomgrit/EPA/Shutterstock

Italian police arrest woman in Vatican financial scandal Cecilia Marogna, who has said she was given hundreds of thousands of euros by a powerful Vatican cardinal to conduct secret intelligence missions for the Holy See in Africa, was arrested by Italy’s financial police on Tuesday. (FT)

MI5 chief: UK to raise defence against Chinese spying Britain’s domestic security service MI5 is “looking to do more” to counter the espionage risk from China as the threat posed by states hostile to the UK increases, its new director-general Ken McCallum revealed on Wednesday. (FT) 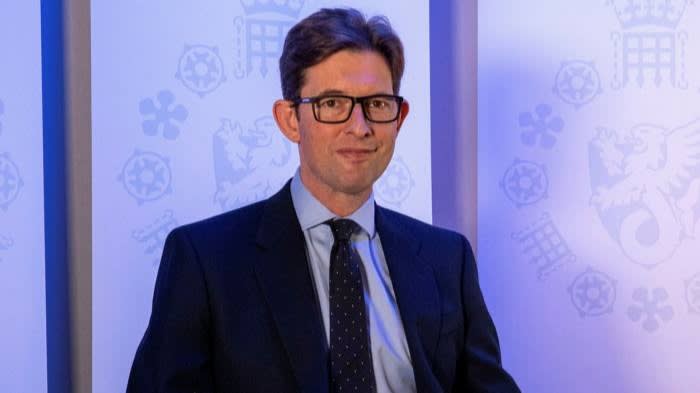 MI5 director-general Ken McCallum: ‘The national security challenges presented by Russian, Chinese, Iranian and other actors are growing in severity and in complexity’ © UK Government/Reuters

Tata looks to Big Basket deal for online groceries push Tata Group is in talks to tie up with Indian online groceries unicorn Big Basket, as the conglomerate attempts to catch up with rivals including Amazon and Mukesh Ambani’s rapidly expanding retail empire. (FT)

Global emissions fell 8.8% in first half, says study Global emissions fell by 8.8 per cent in the first half of the year, owing to the coronavirus pandemic, according to a new report. Still the earth just had its hottest September on record, and the European Central Bank is considering using climate risk to steer bond purchases. (FT, NOAA)

China consumer price index figures While China’s economy is tipped to grow this year, in contrast with many of its peers, consumption remains subdued. Early indicators, however, suggest the domestic tourist rush during the seven-day Golden Week national holiday, which concluded last Thursday, was better than expected.

Big Hit Entertainment IPO The company that manages the K-pop boy band BTS will launch its initial public offering — one that’s been oversubscribed by institutional and retail investors — on Thursday. In September, some critics said the value placed on the group was too high. (WSJ, FT) 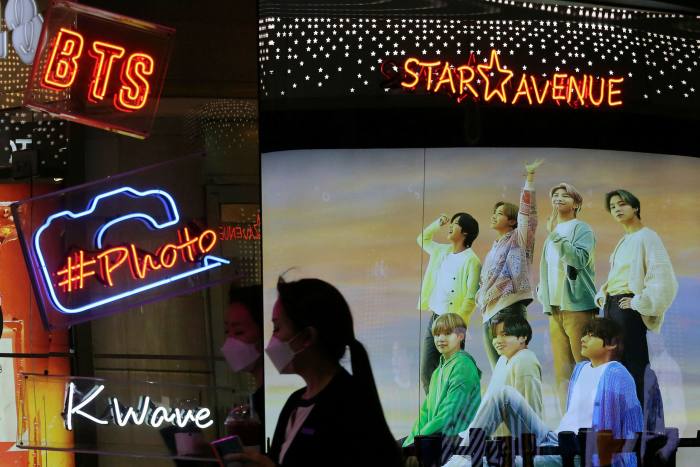 A photo of South Korean K-Pop group BTS is reflected on the glass board at a duty-free shop in Seoul, South Korea. © AP

European Council summit Meetings are due to start on Thursday, when the main focus will be on the progress made on a trade deal with the UK. Boris Johnson has said the gathering will be the deadline for a breakthrough in negotiations. (FT)

Barrett confirmation hearing ends Amy Coney Barrett will face her final day of confirmation hearings in the Senate on Thursday. On Wednesday, Judge Barrett suggested the Affordable Care Act may survive a challenge from the Trump administration. (Politico)

China eyes US election Who would China vote for in November’s US election? Beijing’s preference isn’t clear: a triumph by Donald Trump would further sour relations, but a Biden administration could pose long-term challenges. (FT)

The Chinese banks chasing Anil Ambani The Indian businessman, once one of the world’s richest men, has been pursued through the UK courts by creditors, including Industrial and Commercial Bank of China, since his company’s collapse. The saga is challenging the long held assumption that India’s business magnates will remain beyond the reach of creditors. (FT) 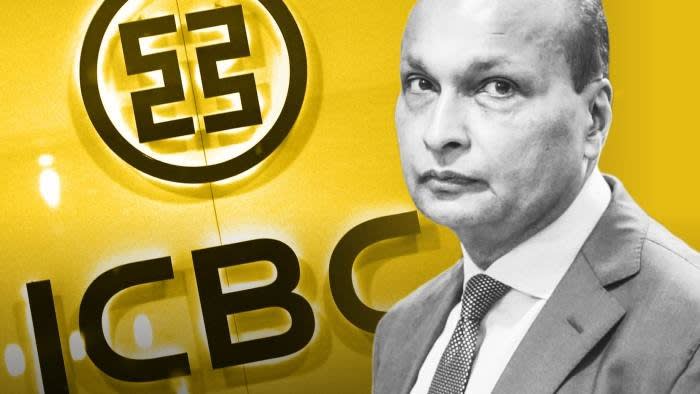 Voter suppression: US election drives litigation storm With the coronavirus pandemic driving the use of mail-in voting to unprecedented levels, Republicans and Democrats have battled in court over how those ballots will be handled. Kadhim Shubber looks at some key issues that could affect the outcome of the election. (FT)

The WHO has become a scapegoat The World Health Organization is an easy punching bag, writes David Pilling. But the attacks serve little purpose other than to undermine the fight against Covid-19. They are part of a swelling backlash against multilateralism, underlined by the US withdrawal from the WHO in the midst of the pandemic itself. (FT) Epstein’s phone book The late disgraced financier Jeffrey Epstein’s phone book runs to 97 pages and contains 1,571 names. One reporter set out to call every one of them, resulting in more than 2,000 phone calls to royalty, ambassadors, a Kennedy and an irritated senior adviser at Blackstone. (MJ)

Retail’s tick-box approach to supply chains is untenable Companies shouldn’t be suddenly liable for every bad apple on the far reaches of their supply chain, but they should know that their defence in court will rest on the seriousness of their due diligence, not the glossiness of whatever they wrote on their website, writes Sarah O’Connor. (FT)

Fears of Chinese infiltration in Taiwan boardroom A battle for control of the Tatung conglomerate, Taiwan’s oldest privately owned company, is forcing regulators to balance the need to ensure corporate governance in the country’s business world with blocking Beijing’s infiltration of its boardrooms. (FT) 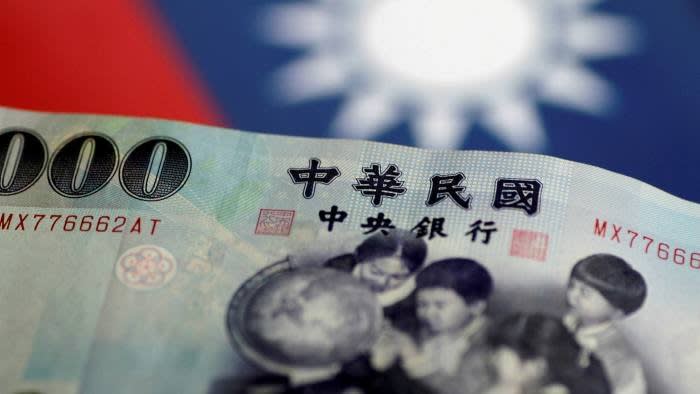 How to deal with the misinformation crisis False news is on the rise. It’s all over the web, and it’s creeping into videos. What’s a news consumer to do? Slow down and be sceptical. Here are tips on how to be your own fact-checker and how to choose your news carefully. (NYT)

Behind the Money: LVMH, Tiffany and buyer’s remorse Bernard Arnault built a €210bn luxury empire through an unflinching acquisition strategy that earned him the “wolf in cashmere” moniker. Tiffany was meant to be the jewel atop his LVMH luxury group. Leila Abboud, Arash Massoudi and James Fontanella-Khan unwind the saga of how the $16.6bn deal has hit rocky ground. 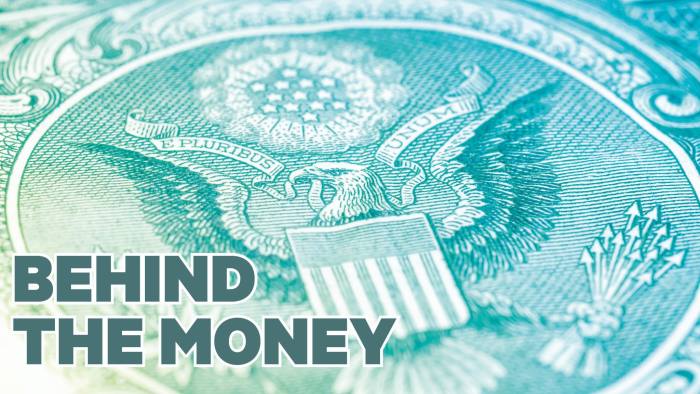