The EU has been handed the right to hit almost $4bn-worth of US goods with punitive tariffs in retaliation for illegal state aid to Boeing, leading Brussels to ramp up calls for a final settlement to the two sides’ 16-year aircraft dispute.

The World Trade Organization announced the decision on Tuesday. The EU must now decide when to put the tariffs into practice.

The retaliation rights of $3.99bn are less than the $7.5bn the US received in a parallel case last year against Airbus, and also less than the $8.58bn requested by the EU.

But Brussels has identified a wide range of US products that it could hit, including aircraft, fitness machines and blueberries. (FT)

Chinese imports hit record dollar amount in September Imports last month were up 13.2 per cent year on year to $203bn, by far the biggest jump in 2020, customs data showed on Tuesday. The previous record for a single month was in September 2018, before the trade war with the US escalated. (FT)

Apple enters 5G market with new line of iPhones The Silicon Valley company introduced a redesigned line-up of iPhones enabled for 5G network speeds on Tuesday, promising to usher in a “new era” for its flagship product. (FT)

Ant Group under scrutiny over exclusive sale of shares in IPO Under the deal, investors bought exposure to the initial public offering — expected to be the world’s largest — through five funds that were exclusively allocated a portion of the company’s shares. Ant’s Alipay mobile phone application was the sole third party distributor of the funds. (FT)

Barrett vows to bring no ‘agenda’ to US Supreme Court Amy Coney Barrett, Donald Trump’s third Supreme Court nominee, insisted she had no “agenda” as she dodged US senators’ questions about how her views on abortion, healthcare and gun rights could influence her judicial decisions. Judge Barrett clerked for the late justice Antonin Scalia, who was a reliable ally to corporations. (FT, NYT) 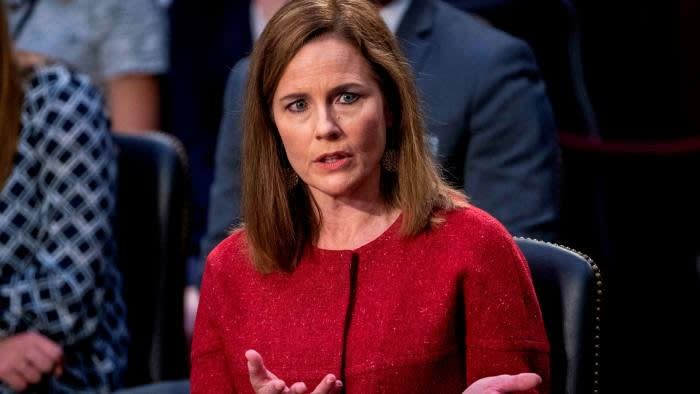 Upbeat start to US earnings The outlook for the US economy feels better than it did three months ago, JPMorgan Chase said on Tuesday, as it announced a much smaller provision for loan losses in the third quarter after a record charge earlier in the year. BlackRock’s assets under management swelled to a record $7.8tn in the third quarter. (FT)

SoftBank prepares to join the Spac race SoftBank Vision Fund is looking for funding for a blank cheque acquisition company, according to a person familiar with the matter. More details are expected in the next two weeks, the person said. (Reuters)

India asks China for ‘complete de-escalation’ New Delhi continued its “all or nothing” approach in discussions with China over control of the disputed eastern Ladakh region during the seventh round of talks. The two sides on Tuesday agreed to continue discussions on the issue. (Times of India, Hindustan Times) 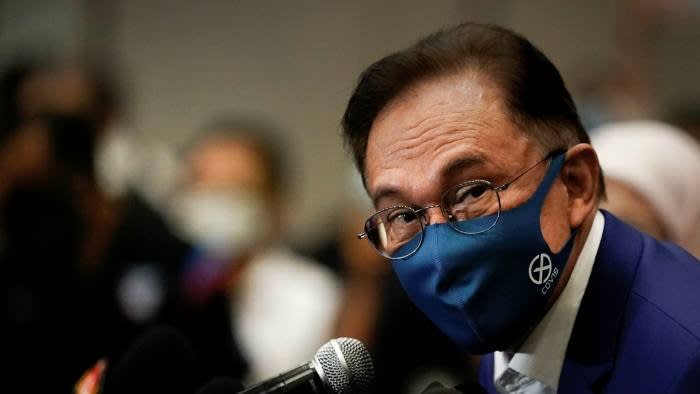 Malaysian opposition leader Anwar Ibrahim, who spoke to the reporters after meeting with the king, has been on a decades-long quest to become prime minister © AP

Central banks The European Central Bank’s Christine Lagarde will speak at the online 16th biennial global roundtable on Wednesday, which is organised by the UN Environment Programme Finance Initiative. Analysts forecast no change on Wednesday for South Korea, which has a 0.5 per cent seven days repo rate.

Earnings round-up Profits are also to take a hit at Goldman Sachs, Bank of America and Wells Fargo, which report on Wednesday. (FT)

Renminbi gains as China strengthens Array of economic and political factors point to a continued rise in the Chinese currency, writes economist Diana Choyleva. Among them: Chinese exporters have benefited from demand from the rest of the world for personal protective equipment and other medical kit. (FT)

King’s money: Thailand split over $40bn question Strict laws govern what can and cannot be said about Thailand’s royal family. But Thais are beginning to break their silence over their 68-year-old king, one of the world’s richest monarchs, who spends more time in Germany than in Thailand. (FT) 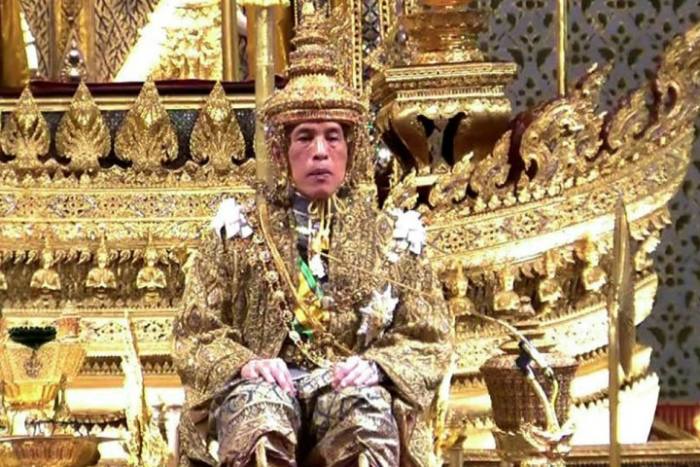 Amazon braces for winter demand surge The coming weeks will be what Moody’s has billed as a “litmus test” for the sustainability of Amazon’s blistering revenue growth, with sales in the second quarter up 40 per cent on last year. Making sure people get their presents on time for Christmas during the pandemic will be a “high-stakes shipping gauntlet”, Moody’s estimates. (FT)

Saving the world from spreadsheet disaster Mistakes in Excel can be costly — and given that about 750m people use the programme globally, there are plenty of expensive errors out there. An elite group of Excel warriors assisting governments and companies are part of the solution. (Wired)

Investors pivot to Biden ‘blue wave’ Shifts to small-cap stocks suggest investors are preparing for Democrats to win more than just the White House in next month’s election, as polls show Joe Biden extending his lead. A string of lawsuits are also challenging attempts to restrict mail-in ballots in battleground states. (FT) 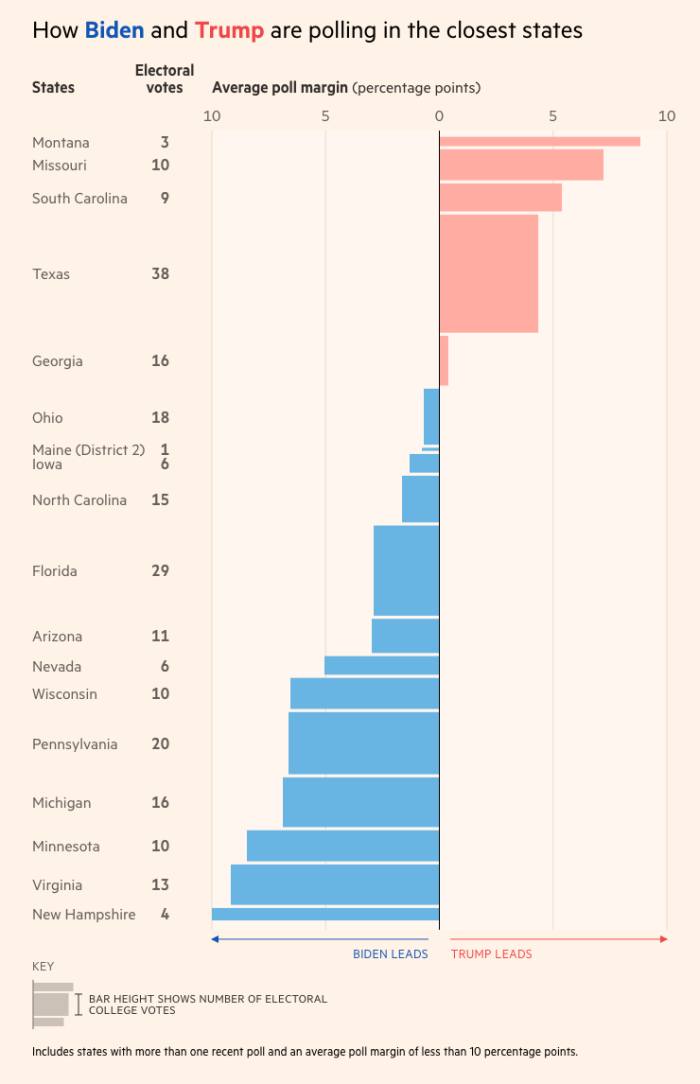 Mr Biden is leading by six points in Michigan, Pennsylvania and Wisconsin. Visit our poll tracker for the latest.

Money Clinic: Advice for graduate job seekers On this week’s episode of the Money Clinic podcast, Claer Barrett chats to 21-year-old graduate Olly. He’s one of the lucky ones, having landed a traineeship with a big accountancy firm in the City of London — but his start date has been put back to January 2021. (FT)

If you would like to be a guest on the Money Clinic podcast, please email a brief description of your problem to [email protected] and mark your message “New Podcast”.

Paradise reopened — St Barths makes another comeback Shuttered first by a hurricane then a pandemic, the island’s glamorous Eden Rock hotel is finally preparing to relaunch. Such catastrophes obscured a longer-term challenge: can an inn synonymous with louche 20th-century glamour keep its cool in this celebrity-saturated world? (FT) 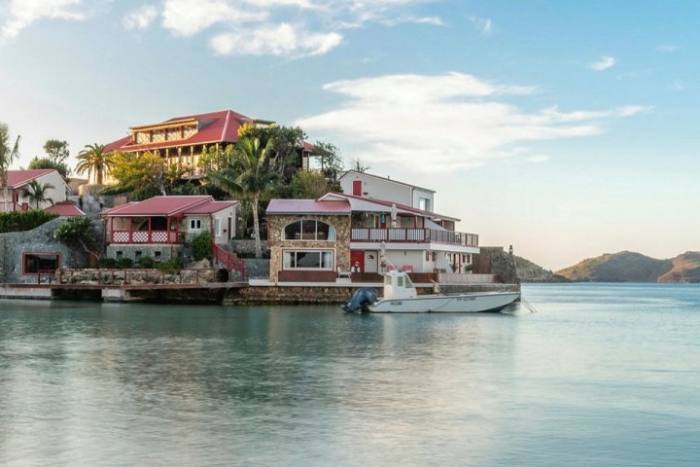 US 2020 election: Midwest working-class whites The FT’s Peter Spiegel and Rana Foroohar look at the swing states of Iowa, Wisconsin and Minnesota, which have large white populations hit hard by the economic crisis, and where support for Donald Trump among women is falling. (FT)