The Tokyo Stock Exchange has announced that trading will resume on Friday, after a hardware glitch caused equity trading to be suspended for a full day in the worst outage since the world’s third-biggest bourse shifted to a fully electronic system in 1999.

The TSE admitted that the decision to restart trading on the $6tn market would involve some risk. By Thursday evening, the operator had yet to establish what went wrong when the main system failed, before the switch to the back-up system also malfunctioned — raising concerns of a repeat.

The shutdown, which fell on a critical day of economic data releases and portfolio rebalancing, affected more than 3,000 stocks listed on exchanges run by TSE’s parent, Japan Exchange Group. The group is Asia’s largest operator, by overall market capitalisation of listed companies, and foreign investors account for about two-thirds of its average daily trading volumes and value.

The exchange announced the halt shortly before the market was due to open at 9am. It later said the closure would last for the full day.

More bad economic news in Japan: business sentiment in the country is recovering more slowly than expected in a worrying sign that the bounce back from Covid-19 will take a long time. (FT)

Riot police deployed against HK protests Hong Kong deployed thousands of riot police on Thursday to quell one of the territory’s first attempts at large co-ordinated protests since China imposed a tough national security law on the city in June. (FT)

EU launches legal action against UK Brussels is suing the UK over plans to violate last year’s Brexit withdrawal agreement, which could lead to Britain being hauled before the European Court of Justice. The EU is proceeding cautiously on UK trade talks, with the latest round of negotiations set to wrap up on Friday. (FT)

China’s sabre-rattling over Taiwan rises Beijing has sharply increased military manoeuvres near the island’s borders this month, forcing Taipei to scramble fighters almost every day. Meanwhile, Taiwan chipmakers are feeling the heat from the US and China. (FT, NYT) 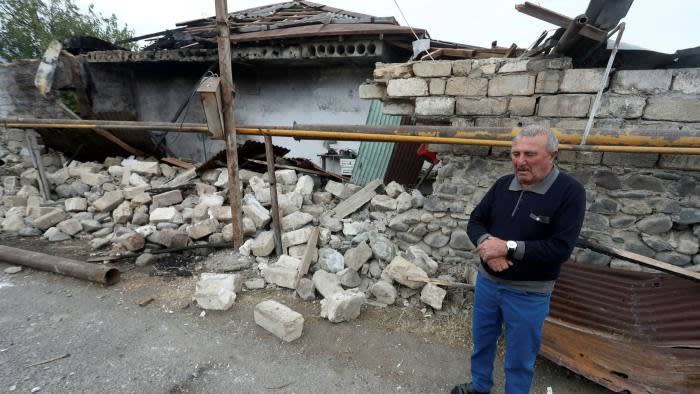 A resident stands near a house, which locals said was damaged during a shelling, at a settlement in the Nagorno-Karabakh region © via REUTERS

Goldman, Morgan Stanley scaled back on Rolls-Royce cash call The leading advisers on Rolls-Royce’s deeply discounted £2bn rights issue radically scaled back their underwriting commitments to the aero-engine maker’s cash call on concerns about the pandemic and market volatility in the run-up to the US election. (FT)

Alexei Navalny says Putin was behind his poisoning The Russian opposition activist has accused Vladimir Putin, president, of being behind the poisoning that put him in a coma, but insisted he would return to the country to continue his political campaign against the Putin regime. (FT)

Facebook to ban ads that aim to ‘delegitimise an election’ The social network will prohibit political advertising that “seeks to delegitimise an election”, including claims of widespread voting fraud or corrupt voting methods, in a concession to critics ahead of the US presidential election. It will also ban adverts supporting QAnon and militarised social movements. (FT, CNBC)

Nikola copyright crackdown The embattled electric vehicle start-up has forced the removal of several critical videos from YouTube, saying they infringed its copyright by using footage from the company — including the now-famous clip of a prototype truck rolling down a hill. (FT)

Which of the following did Joe Biden call Donald Trump at the first 2020 US presidential election debate? A clown? A loudmouth? A danger to democracy? Take our quiz.

US labour market data Figures out on Friday will help analysts gauge the strength of the US recovery. The unemployment rate stood at 8.4 per cent in August, and while it is expected to fall to 8.2 per cent in September, only half of the jobs lost since the outbreak began will have been regained, and the rate of jobs growth has slowed since June.

European inflation reading Friday’s data will provide the European Central Bank and investors with a better idea of how the coronavirus pandemic is weighing on the prices of consumer goods after a poor reading for August. (FT)

SoftBank: tech evangelist or hedge fund? The Japanese group has cash and a mercurial leader in Masayoshi Son, but investors say it lacks a clear statement of purpose in the wake of the Arm Holdings sale and losses at the $100bn Vision Fund. Many are now asking: what is SoftBank? (FT)

Renminbi strength foretells dollar’s decline China’s currency has become a prime indicator of the dollar’s fortunes in the same way that Japan’s yen was in the 1990s. The sharp rebound in renminbi is a clear sign the greenback is likely to weaken further, writes Mansoor Mohi-uddin, chief economist at Bank of Singapore. (FT)

Silent witnesses The deaths of two men in Springfield, Missouri, in 2015 alarmed British investigators: the two had been possible witnesses in a corruption case targeting a multibillion-dollar mining house. Five years on, a Financial Times investigation has found the cause of death — malaria — is open to serious question. (FT) 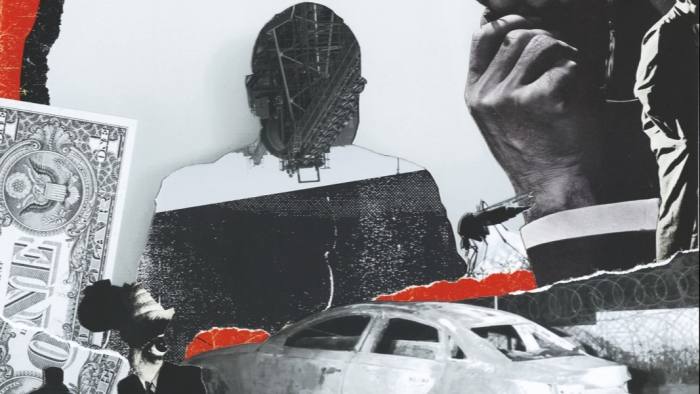 America’s bleeding democratic image The US brand is in measurable freefall, much to China’s delight, writes Edward Luce. Donald Trump said China ate Joe Biden’s lunch when the latter was vice-president. Beijing has moved on to tomorrow’s breakfast. Meanwhile, European attitudes to Americans are shifting from envy to compassion, says Simon Kuper. (FT)

Social activism is dividing Silicon Valley Two disruptive ideas emerged this week from Coinbase: businesses exist to make money and employees are there to work. These sentiments, expressed by the cryptocurrency company’s chief Brian Armstrong, have gone down in the tech sector like a bucket of warm kombucha. Elsewhere, a QR code could decide whether you go back to work. (FT, Quartz)

The union boss fighting to ‘put workers first’ Sara Nelson is head of the largest flight attendant union in the US, with 50,000 members spread across 20 airlines. She is the new face of the US labour movement: female, in her 40s and politically progressive. A new study reveals the pandemic may force one in five working mothers to step back. (FT, WSJ) 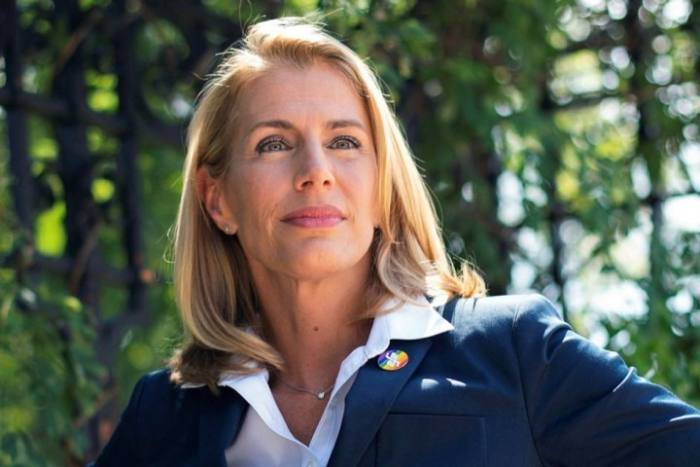 “People are realising that lots of things that are really important today, such as the legal justifications or non-justifications for China’s territorial claims in the South China Sea . . . stem from things that happened in those intervening years.”