Boris Johnson warned more restrictions could be imposed soon as his chief scientific adviser admitted coronavirus was not “under control” in the UK.

Speaking at a press conference in Downing Street, the prime minister said he would defy those who to “give up and let the virus take its course” with a huge loss of life.

The warning came just after Mr Johnson quelled a rebellion by Conservative MPs, promising parliament a vote on future Covid-19 measures in an effort to stabilise his listing premiership.

Some Tories have expressed concern about the economic damage of further restrictions — and about the influence of scientists, who in turn mounted a vigorous self-defence of what MPs branded “Project Fear”.

The government admitted on Wednesday that taxpayers face up to £23bn in losses on bad loans in emergency business bailout schemes. Second-quarter gross domestic product also contracted 19.8 per cent, the worst among major economies. (FT)

Britain’s chances of a robust pandemic recovery have been dented by a severe deterioration in business investment. Follow our live coverage here.

Are you under 30? Tell us how coronavirus has affected your life.

Trump debate fallout Republicans sought to distance themselves from Donald Trump following the US president’s aggressive debate performance and refusal to condemn white supremacists. Our Big Read examines how Mr Trump is undermining the legitimacy of America’s voting system, which Facebook vowed to protect with new measures on Wednesday. (FT) 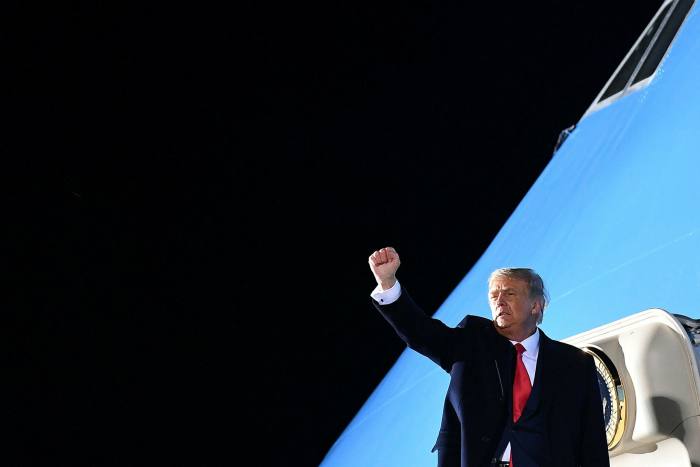 An estimated 73.1m people watched the debate, according to Nielsen — a significant drop from the 84m who watched the first debate between Mr Trump and Hillary Clinton in 2016 © AFP via Getty Images

Swamp Notes dissects the debate in a special edition newsletter. Sign up here, and follow the latest election movements with our poll tracker.

UK asylum plans Downing Street confirmed it is examining plans to create an offshore processing centre for asylum seekers attempting to reach the UK. Clandestine migrant crossings in the English Channel have increased almost fivefold this year compared with 2019. (FT)

Brexit sticking points As UK and EU negotiators look to shift talks into an intensified and tightly controlled format known as “the submarine”, here are the sticking points. More than 7,500 finance jobs and £1.2tn in assets have already left Britain for the EU as banks prepare for Brexit, according to EY. (FT, Reuters) 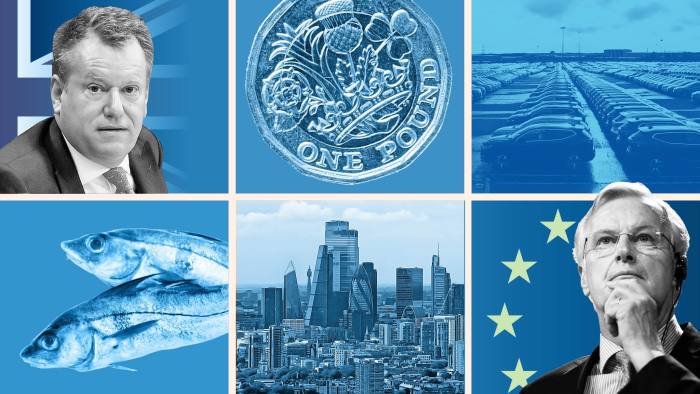 China sabre-rattling Beijing has sharply increased military manoeuvres near Taiwan’s borders this month, forcing Taipei to scramble fighters almost every day. Germany, meanwhile, is set to exclude Huawei from its 5G networks with a new bill that sets a “political trustworthiness” test. (FT)

Ocado steals Tesco crown Online group Ocado overtook Tesco as the most valuable food retailer on the UK stock market for the first time this week, though the latter remains Britain’s largest by sales, profits and cash flow. Palantir surged on its debut but ended with a market value of $15.8bn, $4bn below its high water mark. (FT) 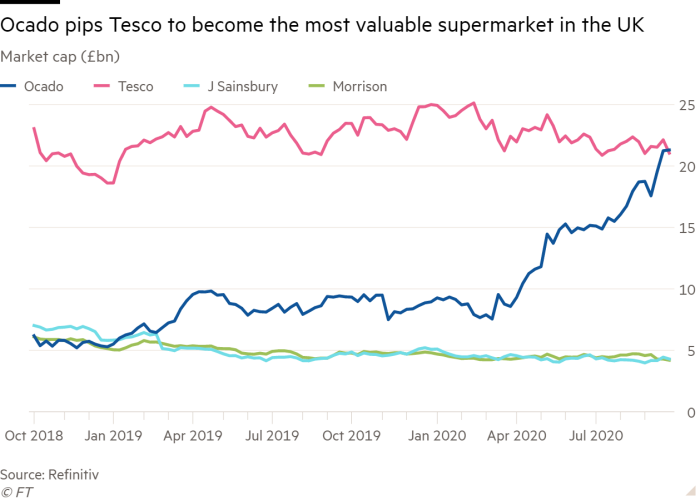 CBI diversity push Aviva, Microsoft, Deloitte and Linklaters are among the companies signed up to a new campaign urging members to have at least one ethnic minority board member by the end of 2021. A new study reveals the pandemic may force one in five working mothers to step back. (FT, WSJ)

China national day Protests have been banned in Hong Kong, where 6,000 police officers will be deployed as China marks its 71st anniversary. Last year was one of the most violent days of unrest in the territory, with a protester shot by police. (HKFP, FT) 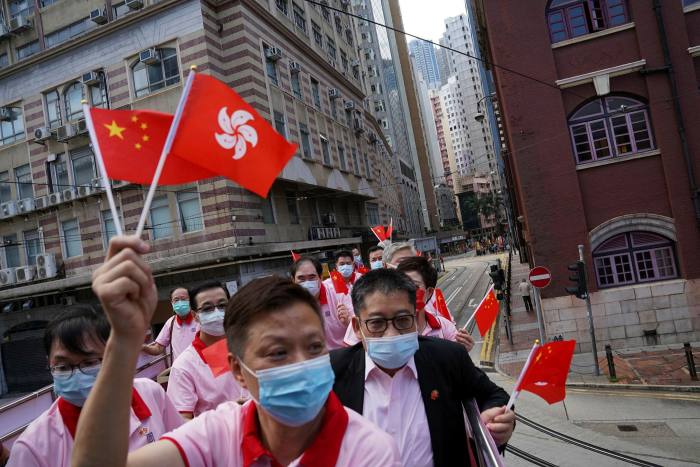 EU summit A two-day meeting of EU leaders, postponed last week after European Council president Charles Michel went into quarantine (he was not infected), begins on Thursday. Belarus and Turkey are on the agenda, which could be overshadowed by rule of law divisions. (FT)

Silent witnesses The deaths of two men in Springfield, Missouri, in 2015 alarmed British investigators: the two had been possible witnesses in a corruption case targeting a multibillion-dollar mining house. Five years on, a Financial Times investigation has found the cause of death — malaria — is open to serious question. (FT) 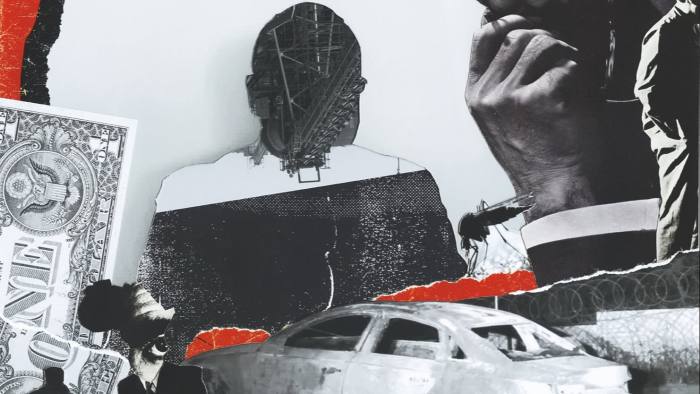 The deaths of potential witnesses have alarmed investigators looking into ENRC, the mining house that operates in a murky world across Africa and the former Soviet Union © Mark Watkins

SoftBank: tech evangelist or hedge fund? SoftBank has cash and a mercurial leader in Masayoshi Son, but investors say the Japanese group lacks a clear statement of purpose in the wake of the Arm Holdings sale and losses at the $100bn Vision Fund. Many are now asking: what is SoftBank? (FT)

Lunch with the FT Alex Younger, codenamed ‘C’ and the outgoing chief of MI6, tells FT editor Roula Khalaf why we still need “garage shed” spycraft and why he kept a jar of homemade blackberry jam handy in Afghanistan. Watch their exchange here about how the pandemic has redoubled the secret service’s mission. (FT) 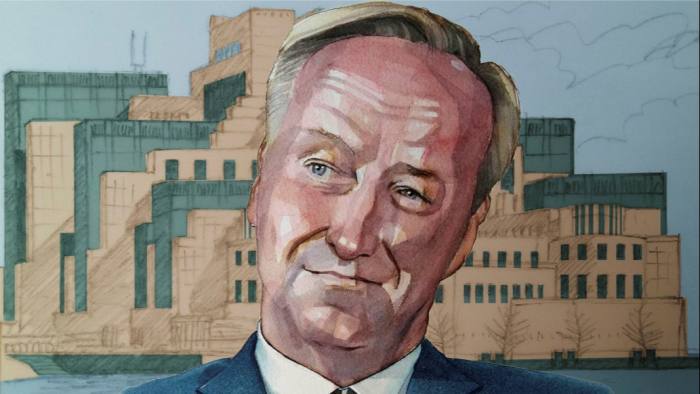 ‘I’m basically a romantic. I believe in human agency. I love the fact that individuals can make a difference; in however small a way, I wanted to be one of those people’ © James Ferguson

Germany’s tough choices Germany prospered through the best of times. Now, it must navigate through the worst. The external stability on which its domestic success was built has crumbled, Philip Stephens writes. Europeans dreams of America are souring, Simon Kuper writes, as attitudes shift from envy to compassion. (FT) 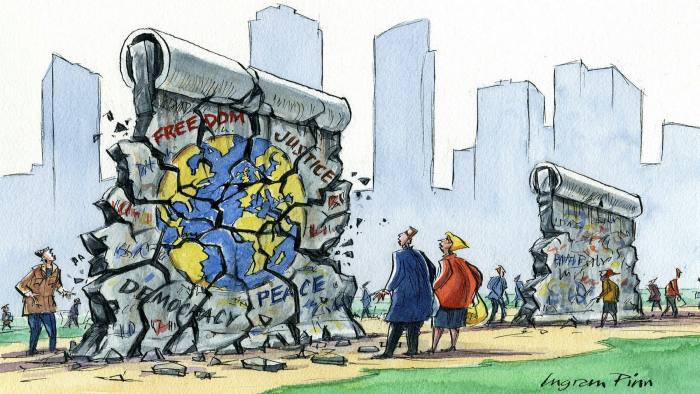 Thirty years after the fall of the Berlin wall, history did not end after all and the republic must take sides © Ingram Pinn/Financial Times

Destination Nicaragua The little-known Latin American jewel has been on travel advisory lists since 2018, when demonstration were met with pitiless state repression. It shouldn’t be so. When Bella Pollen mentions that she’s writing for How To Spend It, Róger Gurdián Vigil, the mayor of León, chuckles. “Easy; spend it here.” (FT)

Architecture award The Riba Gold Medal usually comes towards the end of a long and illustrious career. David Adjaye, the award’s latest recipient and its first black honoree, turned 54 this month and is just getting started. (FT) 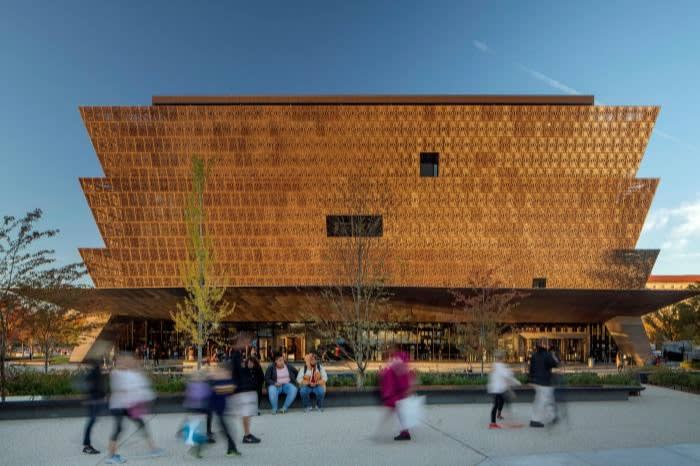 Mr Adjaye achieved global recognition for the Smithsonian’s National Museum of African American History and Culture in Washington, which was inspired by a Yoruba crown © Nic Lehoux

“People are realising that lots of things that are really important today, such as the legal justifications or non-justifications for China’s territorial claims in the South China Sea . . . stem from things that happened in those intervening years” 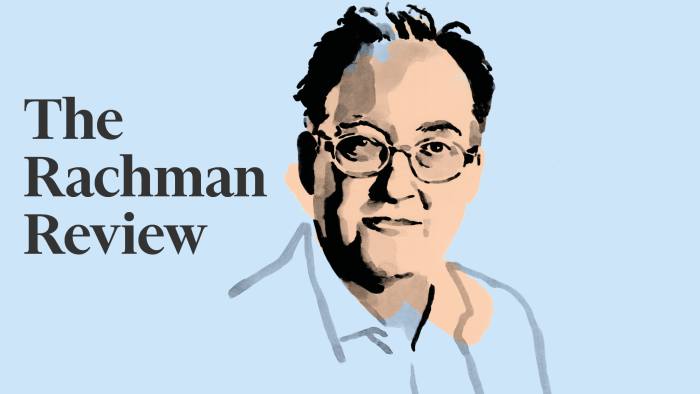