EU and UK negotiators are set for a Brexit showdown this week as they seek to build on tentative signs of progress for a trade deal.

Teams will meet on Tuesday for three days of talks in Brussels a month ahead of what EU chief negotiator Michel Barnier has called the “realistic deadline” for a deal to be ratified by the end of Britain’s transition period.

EU diplomats told the Financial Times that at stake this week was whether enough headway could be made to justify entering into intensive “tunnel” talks to resolve the most difficult outstanding issues.

But the two sides have yet to identify landing zones on two sticking points: the EU’s fishing rights and demands for a “level playing field”. Officials will also meet on Monday to discuss dual-listed companies, which risk being locked out of trading in the City of London.

Boris Johnson is under increasing pressure to prove his leadership as a no-deal scenario looms. In our Brexit Briefing newsletter, Peter Foster cautioned against expectations of a sudden breakthrough (sign up here). (FT)

Europeans are returning to workplaces, but leisure activity remains down in virus-sensitive sectors. Follow our live coverage here. 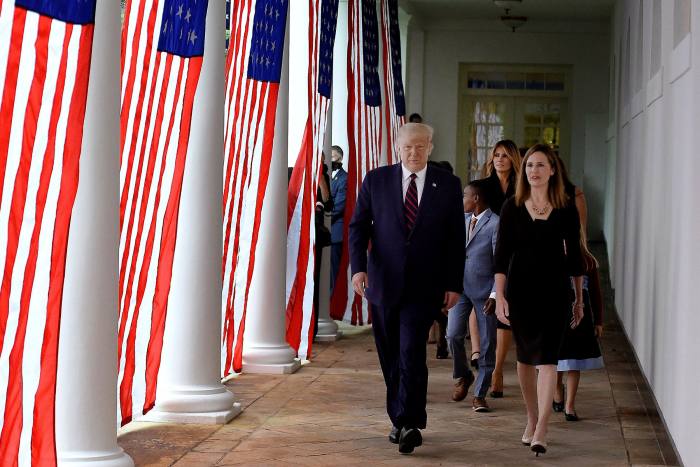 Trump’s taxes Donald Trump paid just $750 a year in federal income taxes in 2016 and 2017, according to a report based on the US president’s tax-return data that revealed that he paid no income tax at all in 11 of 18 years. Corporate donations to Democratic groups have increased. (FT, NYT)

Where do Mr Trump and Joe Biden stand ahead of the first debate on Tuesday? Follow our poll tracker for the latest.

TikTok ban deferred A federal judge blocked the Trump administration from forcing Apple and Google to remove TikTok from US app stores hours before a ban was due to come into effect. On Friday, the US imposed sanctions against SMIC, China’s biggest chipmaker, according to a copy of a letter seen by the FT. (FT)

Caucasus clashes Armenia and Azerbaijan have declared martial law and mobilised their armed forces after deadly clashes over the disputed Nagorno-Karabakh enclave on Sunday, the worst flare-up since a five-day war in 2016. (FT) 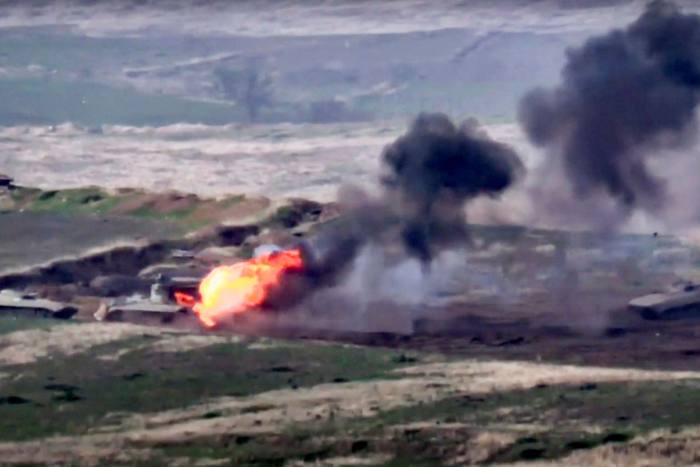 Armenian forces destroy an Azerbaijani military vehicle at the contact line of the self-proclaimed Republic of Nagorno-Karabakh, Azerbaijan, in footage on Sunday from the Armenian defence ministry © AP

Exclusive: Trafigura’s $2bn renewables push Trafigura, one of the world’s biggest independent oil traders, is making a push into renewable energy with plans to build or buy 2 gigawatts of solar, wind and power storage projects. (FT)

Switzerland rejects immigration curbs Voters defeated a nationalist initiative to tear up Switzerland’s free-movement agreement with the EU by a large majority, a key test of sentiment ahead of complex negotiations over future relations. (FT)

Exclusive: Nikola’s dubious designs The original design for Nikola’s flagship truck, which is at the centre of a $2bn lawsuit with Tesla, was purchased from a designer in Croatia, according to two people with knowledge, despite claims that the vehicle was designed by founder Trevor Milton, pictured below, “in his basement”. (FT) 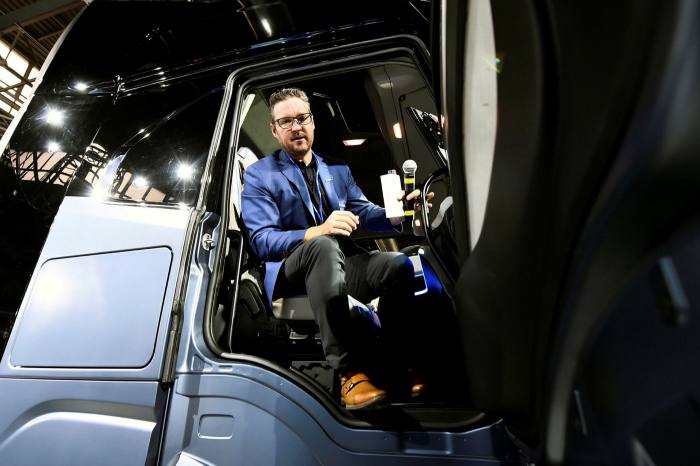 Argentina bonds ‘back in hot water’ Buenos Aires’ newly restructured dollar bonds have slumped in value less than a month after a deal to postpone payments on $65bn of foreign debt. Brazil is on track for its biggest year for IPOs since 2007. (FT)

NMC in administration NMC has been placed into administration in the UAE, allowing the hospital group to meet September salaries with an additional $325m in funding under protection against debt claims. (FT)

Uber’s London verdict The ride-hailing app will on Monday receive a ruling on its appeal against London’s transport regulator’s stripping of its operating licence. (FT)

Aldi results The lack of an online shopping platform is likely to affect the annual results of Aldi UK on Monday, which is forecast to lose market share as consumers shift online during the pandemic. (FT) 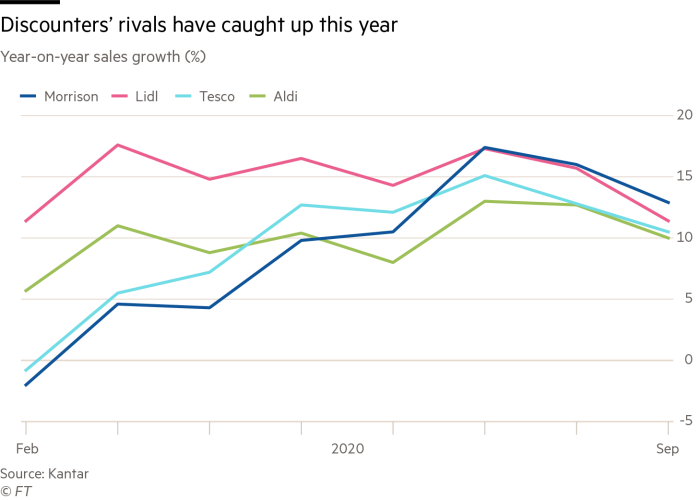 New listings Shares in Siemens Energy begin trading on Monday with a target valuation of up to €20bn. Kioxia Holdings postponed its $3.2bn IPO, Japan’s biggest of the year, while South Korea’s Big Hit Entertainment priced its flotation. (FT, Reuters)

LV takeover talks Mutually owned life insurer LV, the UK’s third-largest, will confirm takeover talks on Monday. Any deal could lead to a windfall for its 1.1m members. (FT)

The new gold rush Warren Buffett once mocked gold as a way of “going long on fear”. But this year, the “sage of Omaha” has joined a rush into the precious metal as a hedge against frothy markets and rock-bottom rates that has made gold one of the world’s best performing financial assets. (FT) As ETFs helped push the price to records, Indian and Chinese consumers are selling the precious metal

Barclays paved the way for Rolls-Royce It’s hard to think of two more dissimilar British businesses than Rolls-Royce and Barclays. Yet amid the coronavirus crisis, the Derby-based manufacturer is in a very similar situation to that of the Canary Wharf banking giant in 2008, Patrick Jenkins writes. (FT)

Bidenomics puts workers over wealth While Joe Biden campaigned in the Democratic primary as a moderate, he has since outlined a much more progressive economic platform. At its heart are tax increases for high-income households and corporations to reduce inequality and fund $3.9tn of public investment. (FT) 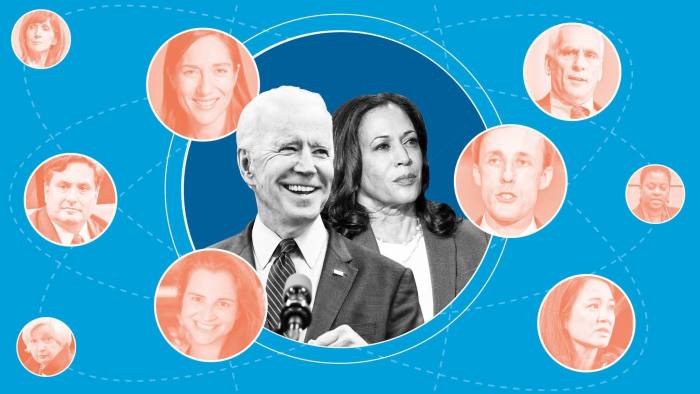 Judicial realism There is always be an overlap between politics and the judiciary, and it is naive to believe otherwise, David Allen Green writes. After 17 years, Wolfgang Münchau bides farewell to the FT with a reflection on the insider-outsider struggle behind crumbling orders. (FT)

Lunch with the FT Fatou Bensouda, prosecutor of the International Criminal Court, discusses hunting war criminals, facing the Trump administration’s sanctions and widening the court’s remit with David Pilling, who wonders if their face-to-face meeting in The Hague is the first Lunch with the FT in contravention of US law. (FT) ‘It’s about the law. It’s not about power’ © James Ferguson

Seek redemption, not cancellation The annual Jewish repentance season reaches its pinnacle on Monday with the Day of Atonement, Yom Kippur. Its belief that we all make mistakes is worth keeping in mind, writes Rabbi Laura Janner-Klausner, amid culture wars that rage about people or views deemed unacceptable. (FT)

The WFH legal minefield Last week, a London council permitted staff to smoke at work — provided they were working from home. Employment laws were written for a world that may never return, Pilita Clark writes. Beware leaders who flout their own rules, Andrew Hill warns. (FT)

Trump vs Biden: The Battleground States In the first episode of a new series on the US election, Peter Spiegel and Rana Foroohar examine how the pandemic might affect the outcome in the key swing states of Arizona, Texas and Florida, which are also among those worst-hit by Covid-19. (FT)