Joshua Wong, one of Hong Kong’s most high-profile pro-democracy campaigners, has been arrested as authorities crack down on protest leaders in the city.

The former leader of the now disbanded Demosisto political group said he was detained and released on bail on Thursday for allegedly participating in an unauthorised assembly in October last year. He also allegedly violated a law banning demonstrators from wearing masks.

“They can prosecute us, they can arrest us, they can lock us up in prison but they can’t censor our commitment to fight for freedom,” he said.

Mr Wong is expected to appear in court on Wednesday. His arrest is one of scores in Hong Kong since Beijing imposed a national security law on the financial hub in June targeting those opposed to China’s increasing political control over the city. (FT)

Finland has one of the lowest infection rates in Europe and its economy held up better than others. How has it managed? Follow our live coverage here and coronavirus tracker here.

ByteDance asks China for approval on Oracle deal The Chinese company has applied to Beijing for permission to export its technology as it races to finalise an agreement and prevent its viral video app TikTok from being blocked in the US. A US judge says the Trump administration must defend or delay its proposed TikTok ban by Friday. (FT, Reuters)

Donald Trump’s refusal to commit to peaceful transition The US president was roundly rebuked by Republicans after he refused to commit to a peaceful transfer of power, a stance he reiterated on Thursday, if he loses to Joe Biden in November’s election. Mr Trump was booed when he visited justice Ruth Bader Ginsburg’s casket on Thursday. (FT, NYT, Guardian) 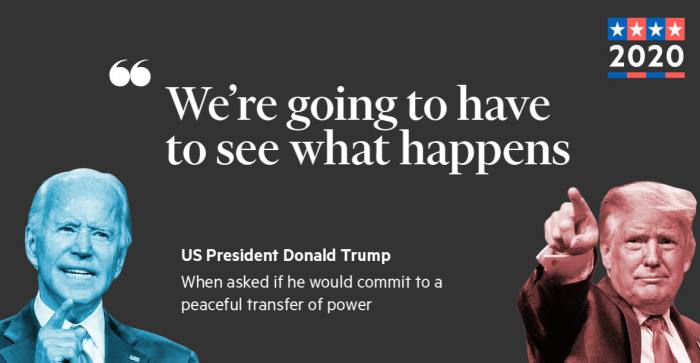 World leaders praise China’s pledge Global officials welcomed China’s new climate target in addresses to the UN General Assembly on Thursday, and said the year ahead would “determine the fate” of the Paris climate agreement. (FT)

US police clash with protesters over Breonna Taylor case More than 100 people were arrested in Louisville, Kentucky, as protests broke out at the news that only one of the three officers involved in the killing of Breonna Taylor would face criminal charges, and none for the death of Taylor, a black woman, directly. Jack Dorsey’s Square has announced a plan to invest $100m in black communities. (FT, New York Times) 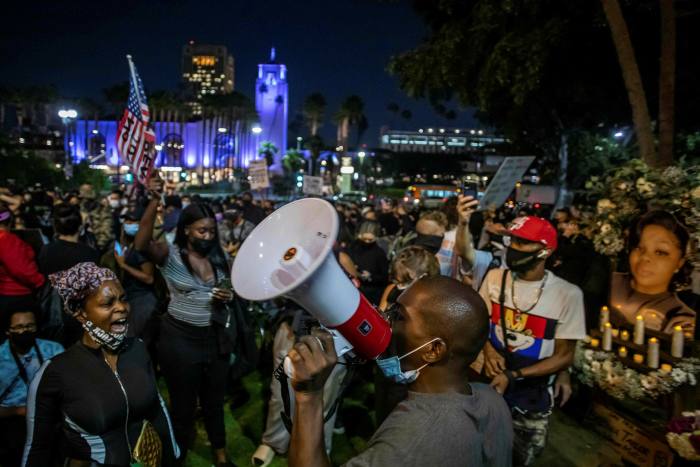 Warren Buffett bets on old media EW Scripps is to acquire Ion Media for $2.65bn in a deal supported by Warren Buffett’s Berkshire Hathaway, marking the latest round of consolidation in the US broadcasting industry. (FT)

China expanding Xinjiang re-education camps, says think-tank A study by the Australian Strategic Policy Institute compiled satellite video evidence of construction in at least 61 re-education and detention facilities between July 2019 and July 2020, despite Beijing’s assurances that their inmates had all “graduated”. (FT) 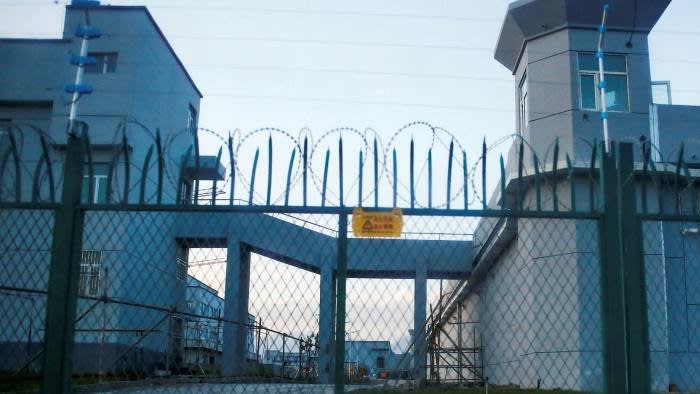 South Korea demands explanation from North over grisly death Tensions have heightened between Seoul and Pyongyang after a South Korean maritime official who disappeared in waters near North Korea on Monday was later shot, allegedly by North Korea, and his body burnt, according to intelligence reports. (FT)

Facebook launches oversight board ahead of US election A “Supreme Court”-style independent oversight board, which will rule on what is allowed on Facebook’s platforms and whether its policies are fair, will start accepting cases from mid to late October, people familiar with Facebook’s plans said. Meanwhile, the former Cambridge Analytica chief has been banned from directorships. (FT)

Ford to close UK engine plant Workers have been dismissed in phases since June 2019 ahead of the full Bridgend factory closure on Friday. Ford cited “changing customer demand and cost”, but denied Brexit was a factor. (BBC)

Kyle Rittenhouse hearing An extradition status hearing will be held on Friday for the 17-year-old from Illinois who is accused of killing two people when he opened fire during protests over the police shooting of Jacob Blake in Kenosha, Wisconsin. (ABC News)

Trump to unveil Supreme Court nominee The US president will announce his pick for the seat left empty on the country’s highest court by justice Ruth Bader Ginsburg’s death on Saturday. (NYT)

FirstFT Asia is off on Monday. Have a good weekend. We’ll be back in your inboxes on Tuesday.

The next financial crisis may be coming soon Oxford Economics asked global businesses the probability of a new financial crisis. Their average answer: 20 per cent over the next two years — twice as high as the perceived risk of a second global wave of Covid-19, and the probability of an early effective vaccine, writes Gillian Tett. Meanwhile, the pandemic has deepened the poverty pit. (FT)

Why autocrats are lining up for Trump The US president may have few friends among America’s usual allies, but he sweeps the board for the authoritarian vote, Philip Stephens writes. It is a depressing reflection of the damage Mr Trump has inflicted on the supposed free world. Next week’s televised presidential debate could be the most consequential in two decades, writes Edward Luce. (FT) 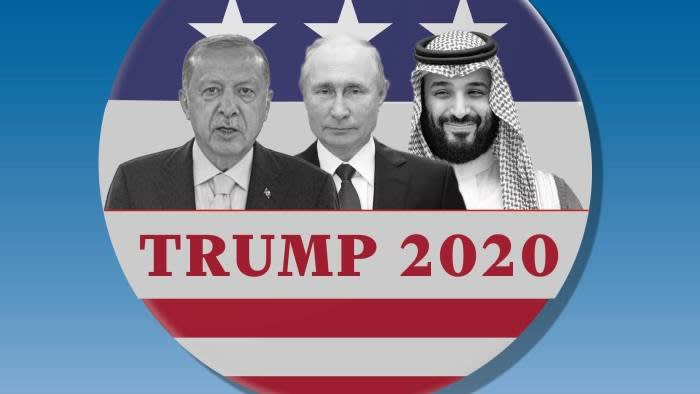 See the latest movements in the US presidential race with our poll tracker.

The rise of Mrs Europe The key to understanding Europe is to understand Ursula von der Leyen, European Commission president. A second-generation Eurocrat, she is part of a class that will determine the future of the continent — whether the EU becomes a United States of Europe or begins to break apart. (The Critic)

A Covid-19 tale of two cities Madrid is once again Europe’s worst-hit region by coronavirus, with almost a quarter of tests coming back positive. In New York the figure is under 1 per cent. The grim story of how the cities diverged lies in mistakes over phasing out lockdown. (FT)

FT/McKinsey business book shortlist Books about the future of work, corporate culture, technology and the US economy made the shortlist for the FT and McKinsey Business Book of the Year. The winner will be announced on December 1. (FT) 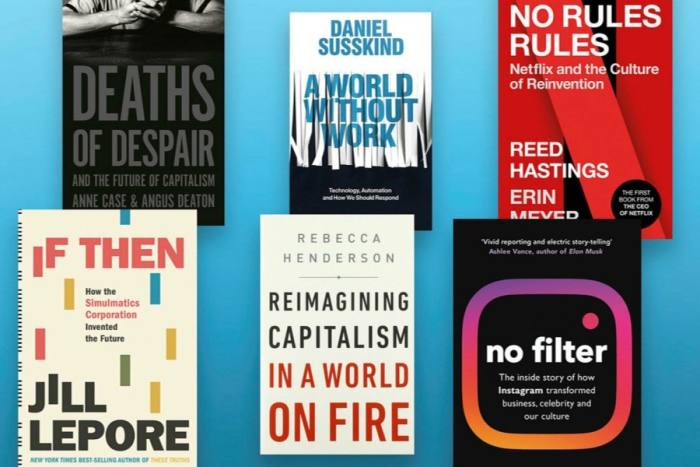 Covid-19 exposes fragile, complex food supply chains There was nothing like the empty supermarket shelves we saw in March to focus the public’s attention on the issue of food supply. The pandemic’s threat to food supply has waned slightly, but Brexit is looming and half of Britain’s food comes from abroad. (FT)

A unique point of view Sirkhane Darkroom, founded by Serbest Salih, gives young Syrian and Iraqi refugees a chance to document their lives through photography. The pictures they return with are constantly surprising. Meanwhile, this cover story argues to stop waiting for capitalism to cure inequality. (How to Spend It, Bloomberg)

A new series on the legal sector’s response to digitalisation starts by looking at how the pandemic is driving change; plus what the legal profession is reading on FT.com.