Both WeChat and TikTok received respite over the weekend, after the Trump administration threatened to block them both from the US app store.

A California judge temporarily blocked a US Department of Commerce ban on Chinese social media app WeChat just hours before it was due to be implemented on Sunday, dealing a blow to Donald Trump’s efforts to curb use of the app because of security concerns.

In the saga of TikTok’s uncertain future in the US, the president gave his “blessing” to ByteDance’s deal with Oracle to keep TikTok operating in the US, after he had threatened to ban the Chinese company’s popular short-video app.

However, Mr Trump’s claim that Oracle and ByteDance would finance a $5bn “patriotic” education fund has raised questions about the deal to allow the app to operate in the US.

The US commerce department added it would delay an order to remove TikTok from Apple and Google’s US app stores to September 27, giving the companies more time to finalise the details of the deal. (FT)

Trump to nominate successor to Ginsburg US President Donald Trump on Saturday said he would nominate a woman this week to succeed Supreme Court justice Ruth Bader Ginsburg, a fierce advocate for gender equality, who died on Friday. Her death could have major implications on US law and the upcoming election. It has ignited a battle over her successor. (FT, Reuters)

EU seeks new powers to penalise tech giants Brussels wants to arm itself with new powers to take on big technology companies, including the ability to force them to break up or sell some of their European operations if their market dominance is deemed to threaten the interests of customers and smaller rivals. (FT)

Bank of England considers negative interest rates UK government bond prices pushed higher last week after traders spotted signs that the BoE might be seriously considering cutting interest rates below zero — a reaction that has taken the central bank itself by surprise. (FT)

Thai protesters challenge king Students took demands for sweeping royal reforms directly to the seat of monarchical power on Sunday, delivering a list of 10 demands and planting a plaque declaring that “the nation belongs to the people, not the monarch”. (FT) 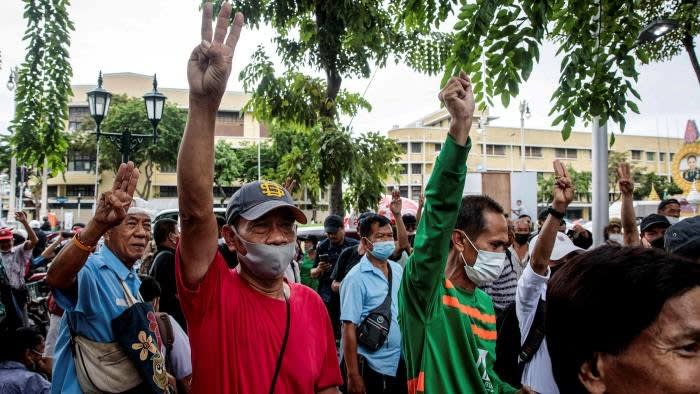 SoftBank to sell last of telecoms assets The Japanese conglomerate has agreed to sell US mobile phone distributor Brightstar in its latest asset disposal, effectively ending its status as a significant telecoms operator. (FT)

China cranks up tensions in Taiwan Strait Beijing sharply escalated tensions in the Taiwan Strait on Friday, approaching the island with multiple jets at three different locations just as the country’s president was about to receive a senior US government official. (FT)

Trump retreats from TV ads The Trump campaign’s pullback from television adverts comes amid signs that his campaign is running low on cash with just seven weeks to go before election day. In some key swing states, such as Iowa and Nevada, the Trump campaign this week stopped television advertising entirely, according to Advertising Analytics. (FT)

Stay up to date on the latest movements in the US presidential race with our poll tracker. 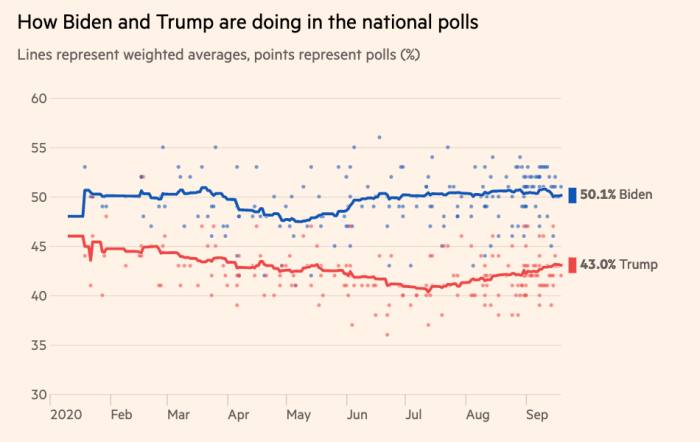 People’s Bank of China The central bank will announce policy on Monday, when no changes to the one-year loan prime rate are forecast. (Nasdaq)

Tiffany-LVMH hearing The hearing on Tiffany’s request to fast-track its lawsuit seeking to hold French luxury goods giant LVMH to its proposed $16bn takeover of the US jeweller is set for Monday. (Reuters)

UN General Assembly The annual event will convene virtually beginning on Monday. Perhaps the biggest issue of all is this: how to tackle issues of global poverty, health and climate risks at the same time, writes Gillian Tett. Subscribe to the Moral Money newsletter for more UNGA news this week. (FT)

How to survive the Covid-19 retail apocalypse It’s hard to imagine an industry that has been as devastated by Covid-19 as retail. But, as Rana Foroohar’s conversation with Bayard Winthrop, chief executive of the sportswear retailer American Giant revealed, there are lessons to be learnt from the crisis, especially for companies willing to adapt. Expect long-term economic scarring from Covid-19, Gavyn Davies writes. (FT) 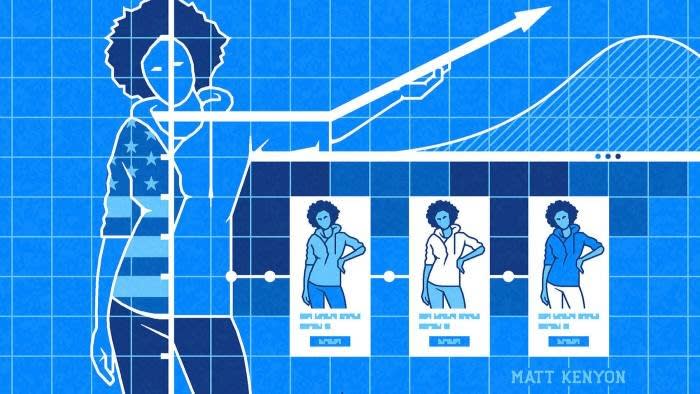 Wuhan has become a showcase for China When the coronavirus was began to spread in Wuhan, which logged four-fifths of the country’s total Covid-related death toll, the government silenced doctors who warned of its dangers. Now, it is holding up the city as a model for recovery — and citizens are accepting the party line. But the recovery may not be what it seems. (Economist, FT)

Strongmen contemplate post-Trump era With Donald Trump trailing badly in the polls, the region’s leaders are being forced to contemplate the prospect of Democrat nominee Joe Biden entering the White House, upending the president’s policies and setting a new course for relations with the Gulf. (FT) 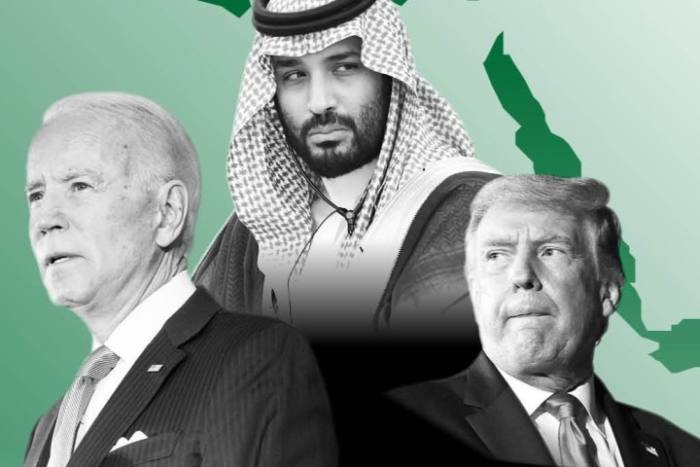 The FinCEN files “A huge trove of secret government documents reveals for the first time how the giants of western banking move trillions of dollars in suspicious transactions, enriching themselves and their shareholders while facilitating the work of terrorists, kleptocrats, and drug kingpins,” BuzzFeed News reports as part of its largest investigation ever. (BuzzFeed News)

Lunch with Marcus Rashford The 22-year-old Manchester United striker has emerged as one of the UK’s unlikely, unifying heroes of the pandemic after launching a food poverty campaign so effective that it forced a policy U-turn from Boris Johnson. But Mr Rashford spoke of the risks of becoming an advocate over lunch with the FT’s Murad Ahmed. (FT) 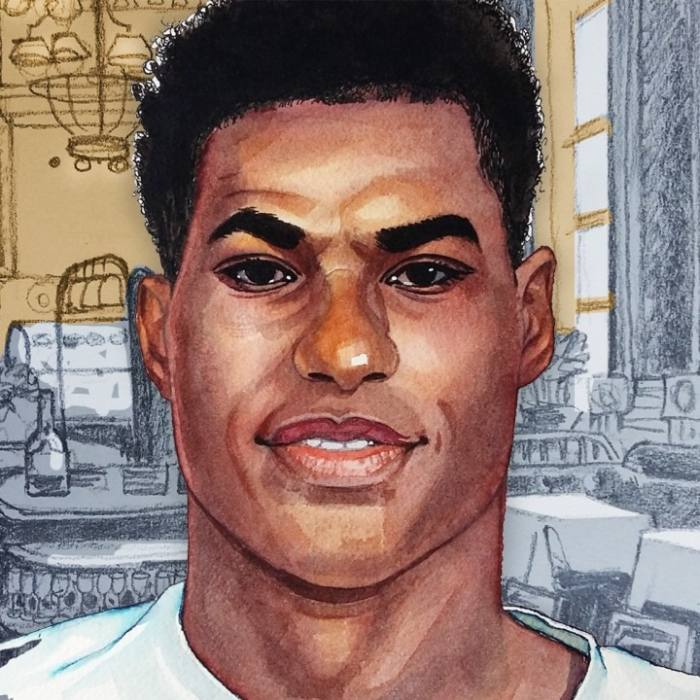 Why ‘hybrid’ working spells trouble for companies A handful of companies, mostly tech groups, have created a head of remote role. Most have not, which underlines how Covid-19 may have upended the world of work but the basic structures of the working world have barely budged, writes Pilita Clark. Many aren’t going into the office, but some are still going in the air — on a flight to nowhere. (FT, NYT)

The future of the university Across the world, coronavirus has fundamentally changed the student experience, removing the serendipity and proximity of campus life. It has also reinvigorated the debate about what universities should offer, and to whom, Henry Mance writes. (FT)

US election Q&A with Demetri Sevastopulo

FT’s Washington bureau chief spoke with Marc Filippino, FT News Briefing host, about Latino voters and their outsized importance in the battleground state of Arizona. Here’s part of their chat, edited for length and clarity. Download the latest episode of the podcast for the full conversation.

Arizona has been a Republican stronghold for decades. What puts it in play for Democrats this year?
There’s a growing Latino population in Arizona, and not all Latinos vote for Democrats — it’s important to point that out, but a large majority do. Also because of anti-immigration or anti-immigrant measures locally, in Arizona you have more reasons for Latinos in the state to become more interested in politics.

Latinos make up such a big part of the US labour force that requires them to be in their place of work, without the ability to work from home, during the pandemic. How might the way Trump has handled the pandemic so far influence their vote?
If a Latino voter is on the fence, this is one of the things that will incline them to go toward Biden. One of the Biden campaign’s core messages is, ‘We are in one of the biggest crises to face America in a long time. And Donald Trump is not coming up with any coherent policies.’ But a lot will depend on the number of Covid-19 cases between now and election day, whether a vaccine comes out and other factors. So it’s still too early to tell if this message is resonating.

To read more of Demetri’s reporting on the campaign to win over Latino voters in Arizona go here. To listen to the full conversation go to the latest edition of the FT News Briefing podcast.