Programming notes: Your news quiz will be back next week. FirstFT Asia is taking a short break and will resume on Wednesday, September 9.

Technology stocks that have powered US equities to record highs this summer went into sharp reverse on Thursday, sending the Nasdaq Composite index tumbling almost 5 per cent in its biggest fall since June.

Apple’s shares lost 8 per cent — wiping more than $150bn from the iPhone maker’s value — while Amazon, Alphabet and Microsoft all fell more than 4 per cent.

Several of the coronavirus era’s superstar stocks, such as Tesla and Zoom Video Communications, suffered even steeper drops. The pullback offered a reminder that the US equity market’s 55 per cent rally since the depths of the crisis in March is still vulnerable to short-term shocks.

A speculative frenzy in derivatives on US technology stocks signals more large swings may be yet to come. (FT)

The FT’s global economic recovery tracker gives an early indication of whether the global economy is returning to pre-crisis levels. Follow our live coronavirus coverage here. 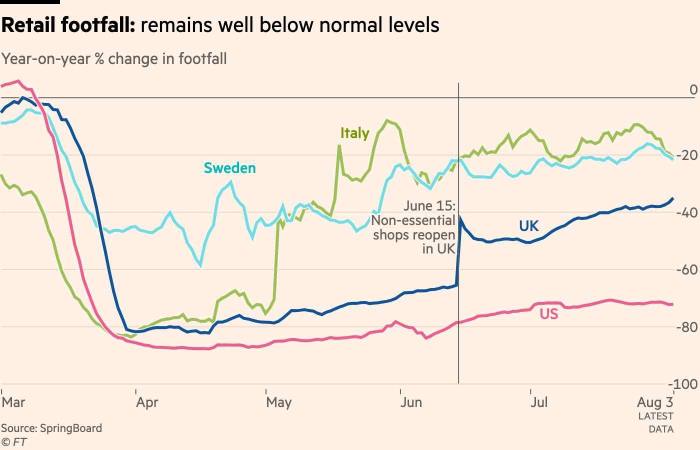 Hong Kong steps up currency interventions The Hong Kong Monetary Authority has intervened 40 times to keep its currency’s peg against the US dollar in check in 2020, official data show — the most active spate of interventions since the financial crisis. (FT)

Joe Biden to visit Kenosha as the city reels after violence The Democratic presidential nominee visited Kenosha, Wisconsin on Thursday, where he met the family of Jacob Blake Jr, who was shot by police and left partly paralysed. Rochester police officers involved in the asphyxiation death of Daniel Prude, a black man, have been suspended after video footage of the incident was released Wednesday. (FT, AP, Reuters)

In Wisconsin, where Donald Trump won by a razor thin margin in 2016, Mr Biden currently holds a 5-point lead. See the latest in our poll tracker. 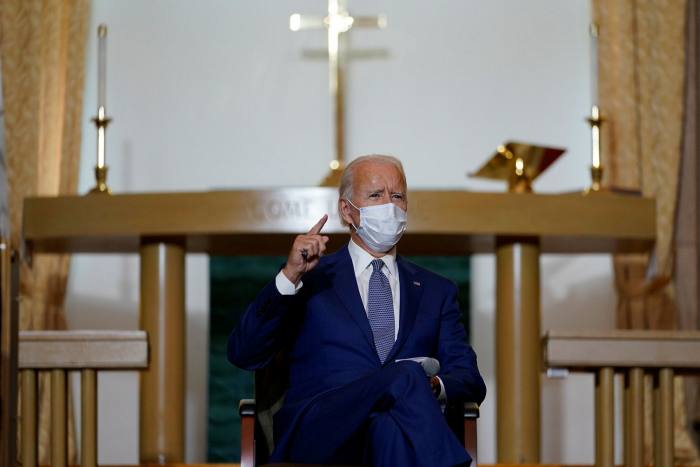 US trade deficit swells in July The US monthly trade deficit hit its highest level since 2008 in July as the country continued to import more than it exports, in a blow to Donald Trump’s promise during the 2016 election campaign to reduce that figure. (FT)

Facebook, in India and US, wades in politics The social media platform has banned Raja Singh of the Bharatiya Janata party over threatening posts about Rohingya refugees and Muslims, after scrutiny over its handling of extremist content in India. In the US, Facebook will prohibit new political adverts in the week ahead of the presidential election. (FT)

Silver Lake in talks to buy $1bn stake in Reliance Retail The negotiations come as Reliance Retail is aiming to raise $5.7bn by selling about 10 per cent in new shares, said the people briefed about the matter. Elsewhere in private equity, KKR is doubling down on its operations in Japan. Stay up to date with the latest M&A news with Due Diligence. Sign up here. (FT)

India bans more than 100 more Chinese apps India has banned an additional 118 apps they say are linked to China, in a move that further ratchets up tensions between the two nations. PUBG Mobile, Alipay, and Baidu are among the affected apps. (The Verge)

Premier League terminates $700m China TV rights deal English football’s top tier said on Thursday it had ended a three-year contract due to expire in 2022 with Chinese digital broadcaster PPTV, marking a blow to clubs in the world’s most valuable domestic football competition, which is already facing huge losses due to the pandemic. (FT) 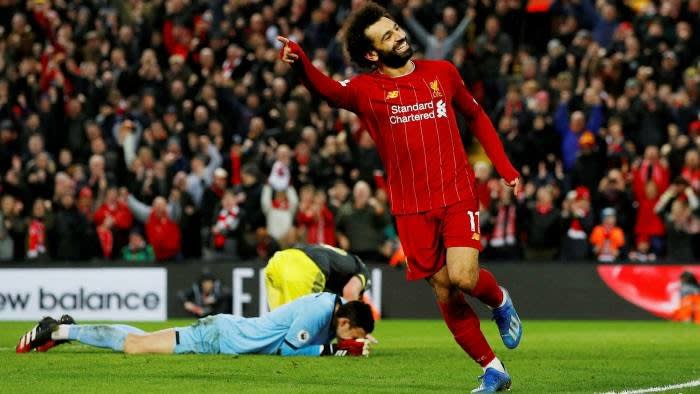 The collapse of the broadcast deal is another blow to the League, which suffered coronavirus-related losses worth a projected £850m last season © Phil Noble/Reuters

TikTok’s eventual buyer will face a huge challenge, Snap CEO Evan Spiegel said at the FTWeekend Festival, which continues through September 5. Explore the full list of speakers and register here.

US jobs report Employment data, out on Friday, will show investors whether the number of jobs added in August has extended a rebound that began in May as lockdowns eased. Meanwhile, lawmakers are still at odds over a coronavirus stimulus package. (FT, Politico)

A tale of two Hong Kongs Days before 12 Hong Kong pro-democracy activists were captured as they attempted to escape to Taiwan, Ant Group announced plans for what may become the biggest share offering in history. The IPO has become a focal point for those who hope capitalism can boom even as the territory’s civil liberties erode. (FT) 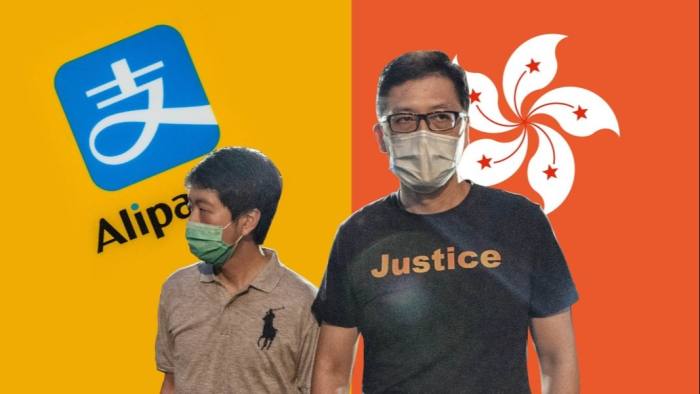 © FT montage; Bloomberg | Lawmakers Lam Cheuk-ting and Ted Hui, who were detained hours after Ant filed for its IPO

Why isn’t meritocracy working? Rana Foroohar reflects on a colleague’s wonderfully contrarian column arguing that no organisation should hire more than a few very clever people. Why? These three books help illuminate the problem — and how we place too much value on IQ over EQ. (FT) 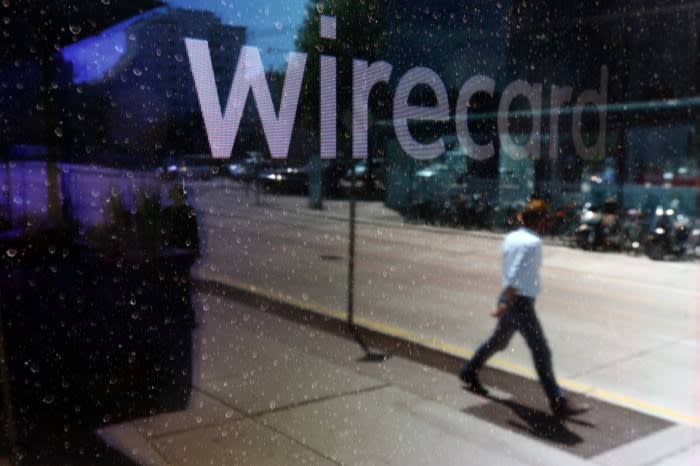 A Wirecard branch in Vienna, Austria. Before the company’s collapse, it had more than 5,500 employees across 28 international locations © Reuters

Fed’s inflation shift is another blow to ‘safe’ assets There are good reasons to think that US Treasuries have lost their some of their diversification advantages, and that central bank measures to encourage inflation will be ultimately ruinous for holders, writes John Plender. (FT) 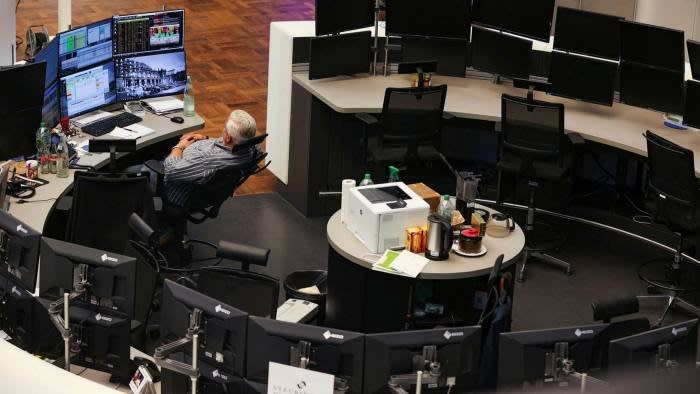 Republican party battles over its post-Trumpian soul Even before US President Donald Trump gets his chance at a second term, a battle has begun over where the Republican Party may turn after. An ideological contest is raging between Reaganite libertarians and post-Trump conservatives. (FT)

A new type of black hole Scientists have released evidence of the discovery of a never-before-seen type of black hole in deep space. The finding could become key to understanding how black holes and galaxies form. In other out of this world discoveries: pilots have reported seeing a “guy in a jet pack” flying above Los Angeles. (Axios, Sky News)

Rachman Review: Putting existential risk on the agenda What are the biggest threats to the future of human existence on the planet? Not nuclear war or climate change as some might think, but man-made pathogens and thinking machines, the Australian philosopher Toby Ord tells Gideon Rachman. He talks about how he reached this conclusion and what can be done to avert disaster.