China’s military is set to double its arsenal of nuclear warheads over the next decade, as it races to become a “world-class” force, according to a Pentagon report released on Tuesday.

The unclassified, 200-page version of the US defence department’s annual report to Congress charts “staggering” amounts of new military hardware as Beijing looks to expand its overseas military footprint in an attempt to rival the US.

“China is already ahead of the United States in certain areas,” said the report.

In its first annual report, in 2000, the Pentagon described China’s military as “mostly archaic”, lacking in capabilities, organisation and training and with technology that was “well behind the curve”.

McDonald’s accused of discriminating against black franchisees In a lawsuit filed in federal court in Illinois, about 50 former franchisees claimed there had been an “exodus” of black franchisees from the system as McDonald’s routinely placed them in high-crime neighbourhoods and in outdated restaurants in need of renovation. (FT)

Vodafone gets win from Indian Supreme Court Vodafone’s struggling Indian venture was given a reprieve on Tuesday as the country’s top court ruled that telecoms companies could take a decade to pay back billions in retrospective licence fees and penalties. (FT)

Czech visit to Taipei heightens China tensions Czech Senate president Milos Vystrcil declared himself to be a Taiwanese as he addressed Taiwan’s parliament, in a pointed reference to John F Kennedy’s speech in Germany at the height of the cold war. Mr Vystrcil’s visit has drawn an angry response from Beijing. Our editorial board lays out how western democracies can help Taiwan. (FT)

Trump defends visit to Kenosha in wake of protests Donald Trump said he would ease tensions in Kenosha, Wisconsin, following the police shooting of Jacob Blake. Mr Trump has come under fire for refusing to condemn Kyle Rittenhouse, a 17-year old Trump supporter charged with homicide after two protesters were fatally shot in Kenosha — a situation he’s mischaracterised. (FT, AP) 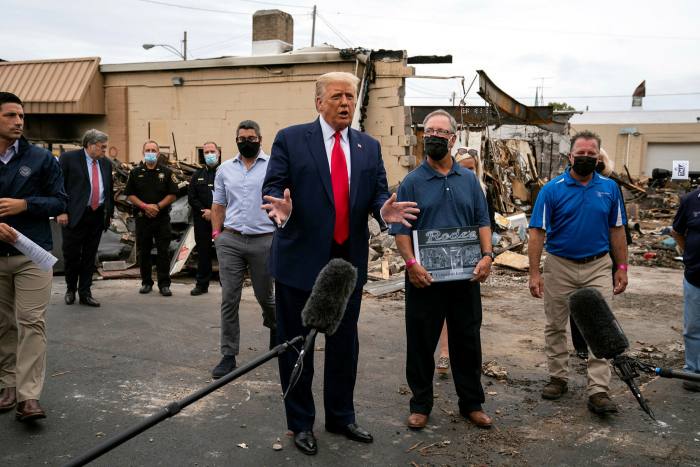 Donald Trump visits an area of Kenosha, Wisconsin, that was damaged during demonstrations after a police officer shot Jacob Blake. © AP

Use the FT’s interactive calculator to see which states matter most in winning the presidency.

US stocks power to new records as dollar stabilises Stocks set new records and the dollar pared back earlier losses on Tuesday as investors weighed up the Federal Reserve’s policy shift on inflation and the latest data on the global economic recovery. Lael Brainard, a senior Federal Reserve official defended the revamped strategy shift. (FT)

German parliament to probe Wirecard collapse A full parliamentary committee of inquiry was needed “to clear up an accounting scandal which has no precedent in Germany’s postwar history”, said Lisa Paus, finance spokeswoman for the opposition Green party. The move will keep the affair at the top of the political agenda well into a critical election year. (FT)

Zoom’s surge Soaring demand for the Zoom videoconferencing service far exceeded even the most optimistic Wall Street forecasts in the last three months, lifting quarterly revenue higher than what the San Francisco-based company reported for the whole of 2019. (FT) 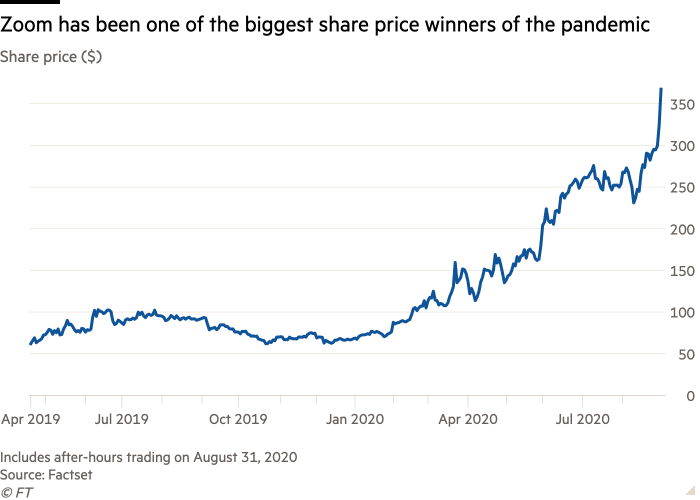 TikTok deal could be announced as soon as tomorrow The social video app has chosen a bidder for its US, New Zealand and Australian businesses, CNBC reports, and the final news of a deal could come as soon as the US Tuesday evening. (CNBC)

Australia economic data The country’s economy is expected to have shrunk when it releases data on Wednesday, with some economists forecasting a 7.5 per cent contraction. (FT)

French stimulus package An announcement on France’s economic recovery plan, originally due last week, is now scheduled for Wednesday. The €100bn stimulus package would continue to cut taxes, and a quarter of the recovery fund money will go to small and medium-sized businesses. (FT)

Why Trump no longer talks about the trade deficit with China Eight months after inking a “phase one” trade deal, with China on track to miss the targets in the agreement, the US president has shifted his language on trade. What does Beijing really think about the forthcoming US election? (FT, SCMP)

Six Abenomics lessons for the world Abenomics may not have been a raging success. But for a world struggling with “Japanification” — a slide towards stagnation, deflation and ultra-low interest rates — Shinzo Abe’s strategy holds powerful lessons, writes Robin Harding. Plus, why Warren Buffett is gambling on Japan’s dealmakers. (FT) 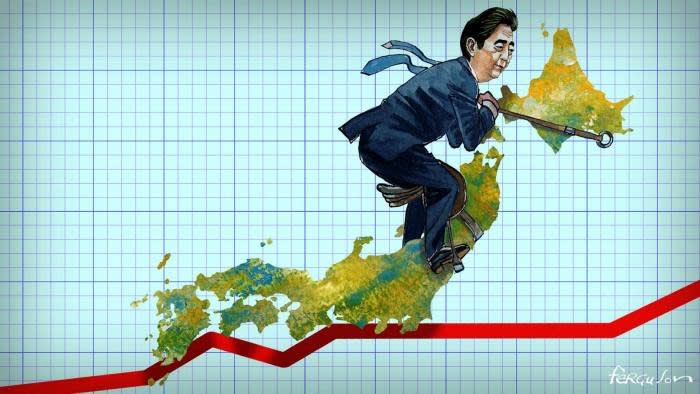 The future of work The pandemic has ignited new initiatives, refreshed old ones, and compelled managers to reassess an approach still often based on being close to their staff. Andrew Hill, our management editor, writes about how managers are harnessing the hidden skills of their employees in today’s Big Read. (FT) 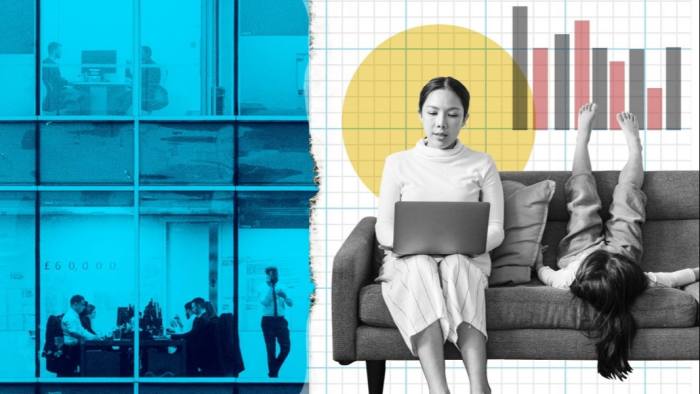 © FT montage; Bloomberg | The coronavirus-enforced exile from the office has uncovered new strengths in the workforce but also brought new problems

WeChat ban deals another blow to Chinese-Americans There’s no obvious parallel to WeChat. It is social media, email, text and a payment platform all in one. Chinese-Americans are already dodging the verbal crossfire of a Sino-American cold war and banning the app would only make the situation worse, writes Patti Waldmeir. (FT)

Tesla’s quest for nickel highlights environmental burden On an earnings call last month Elon Musk said he would give “a giant contract” to any nickel company that could mine the metal “efficiently and in an environmentally sensitive way”. The ask will prove challenging. Meanwhile, Tesla will raise up to $5bn in a stock sale. (FT)

Japan’s karaoke bars adapt to the Covid era From apps that turn smartphones into remote controls to singing alone in a “virtual room”, karaoke bars have made haste to create Covid-safe alternatives. The most intriguing aspect, though, has been what the innovations reveal about us as navigators of a pandemic. (FT) 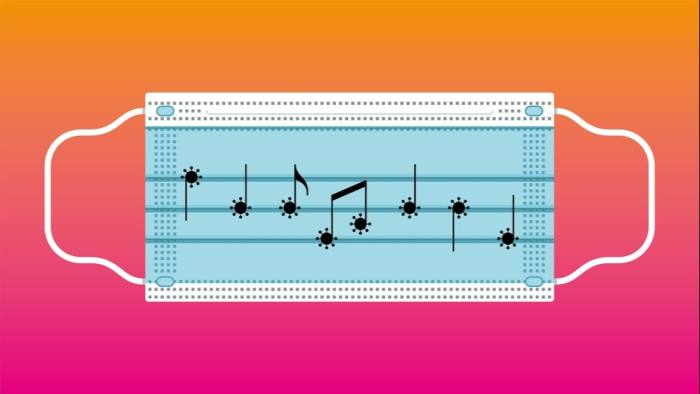 Why India is struggling to cope with Covid-19 The FT’s South Asia correspondent Stephanie Findlay looks at how the coronavirus spread from India’s biggest cities to rural areas and why the country is finding it harder than its peers to bounce back from the pandemic.

Video: Why India is struggling to cope with Covid-19