Lebanon declared a two-week state of emergency in Beirut and ordered the house arrest of anyone involved in storing the volatile chemicals blamed for a massive blast that ripped through the capital, which has killed more than 135 people.

The cabinet took the decision as the number of those injured climbed to 5,000 and scrutiny mounted over why the authorities allowed 2,750 tonnes of ammonium nitrate to be stored at the city’s port for six years. Negligence is suspected as public records show that Lebanese officials knew of the danger posed by the cargo, Al Jazeera reported.

Mark Esper, US defence secretary, said the explosion was thought to have been an accident, contradicting President Donald Trump, who said Americans generals told him it was caused by a bomb — an unsubstantiated claim.

“In the blink of an eye, the whole world changed,” said Firas Alaw, who has worked at the port for nearly two decades. (FT, AP, Al Jazeera)

Wirecard businessman reported dead in Philippines Christopher Bauer, a German businessman responsible for one of the payments company’s biggest sources of stated profits, has been reported dead a month after Philippine authorities announced that he was under investigation. Renowned shortseller David Einhorn says Wirecard fraud was “hiding in plain sight”. (FT)

Chinese state media lashes out at TikTok deal Beijing’s media has called the US a “rogue country” and the potential sale of the Chinese app’s US operations to Microsoft a “theft”, and said it could retaliate if a deal was finalised. (CNBC)

Gold keeps its shine as investors shun dollar Gold pressed higher on Wednesday after breaking the $2,000 milestone and global stocks rose as upbeat data from Europe counterbalanced a less optimistic report from the US labour market. (FT)

US to send highest level official to Taiwan in four decades Washington is sending the highest level cabinet official to Taiwan since cutting diplomatic ties with Taipei 41 years ago, reflecting increasing US support for the country in the face of growing Chinese aggression. Alex Azar, health secretary, will lead a delegation to Taipei “in the coming days”. (FT)

Modi led ceremony to build Hindu temple on site of former mosque Narendra Modi, India’s prime minister, presided over a religious ceremony to kickstart the construction of a Hindu temple on the site of a mosque whose destruction two decades ago sparked deadly riots across the country. (FT) 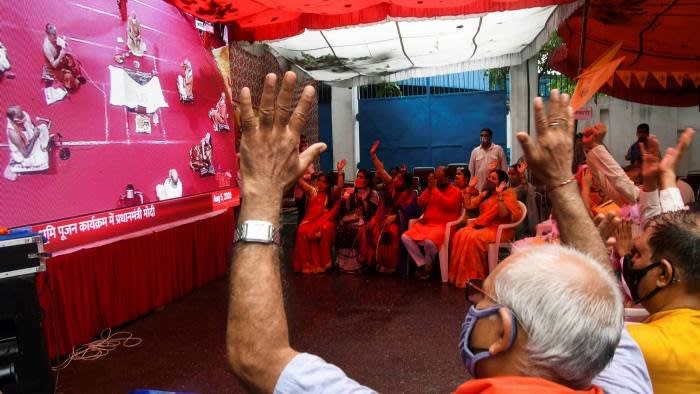 Biden to accept Democratic nomination from Delaware Former US vice-president Joe Biden will not travel to Wisconsin to accept the Democratic presidential nomination at the end of the month, due to concerns about coronavirus, the party said on Wednesday. Mr Biden’s campaign aims to outspend Donald Trump on TV ads ahead of November’s presidential election. (Reuters, FT)

See where the candidates stand with our interactive poll tracker. 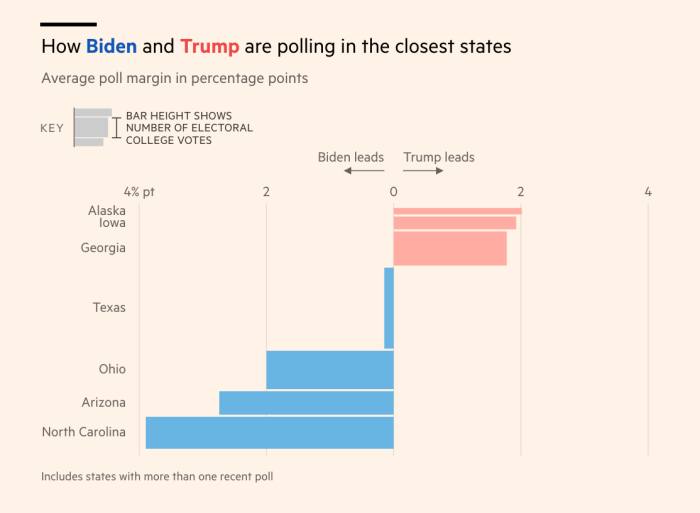 UK and Japan rush to secure post-Brexit trade deal Britain and Japan will on Thursday attempt to thrash out a post-Brexit free trade agreement, although the UK admits a deal might only boost British gross domestic production by 0.07 per cent and would be a bigger prize for Japanese exporters. (FT)

Uber earnings The ride-share company reports on Thursday, when revenue is set to take a lockdown hit due to the coronavirus. Investors will watch for news on the Eats business after it reached a deal to acquire food delivery rival Postmates. (FT)

Central bank meetings No policy shifts are expected when the Bank of England meets on Thursday — following the £100bn of quantitative easing announced in June, which was seen as sufficient to last to the end of the year. India is likely to cut rates on Thursday. (FT)

How competitive is China’s tech scene? Part of the US backlash against China is based on the fact that the country has rigged the tech game — by closing its market to foreign players in numerous sectors, writes Henny Sender. But their absence does not mean that life is less cut-throat for domestic groups, entrepreneurs argue. For more, sign up to our #techAsia newsletter. (FT)

A defeat for Donald Trump is not a defeat for autocracy Voters are rejecting the US president’s incompetence, not his authoritarianism, writes Janan Ganesh. A thought experiment: had Mr Trump suppressed the virus, but still cleared Lafayette Square for a photo-op, would he be 10 points behind Joe Biden, presumptive Democratic nominee for president? (FT)

China ahead on drilling for data The US demand that China close its consulate in Houston last month signified that data, heralded as “the new oil”, may finally be a casus belli, Leo Lewis writes. Hong Kong’s richest family, which controls the territory’s largest property empire, lost $8bn in a year. (FT, Bloomberg) 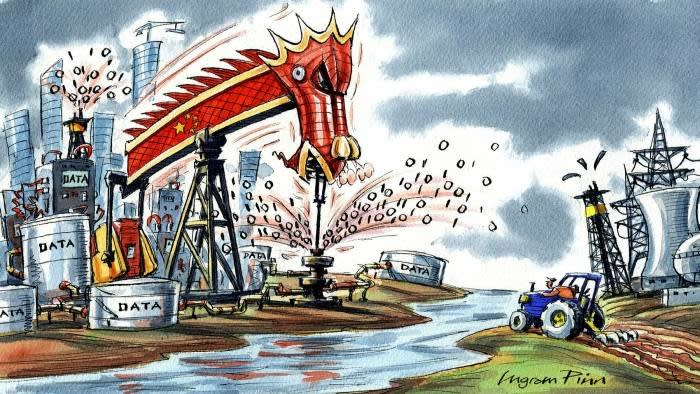 The new workplace perks Beers, baking and poke bowls — employers are turning to food and drink deliveries to sustain culture and morale while homeworking. Employees and employers both face trade-offs as offices reopen — stress has fallen even as the workday has lengthened. Patti Waldmeir reflects on her promise to emerge from lockdown “a better version of myself”. (FT, Economist)

Gulf fears over food security Supply chain disruption and the threat of protectionism have raised the spectre of a global food crisis in Gulf states. But the UAE and Saudi Arabia are ready, having already invested in overseas agricultural resources and agritech ventures at home. (FT) 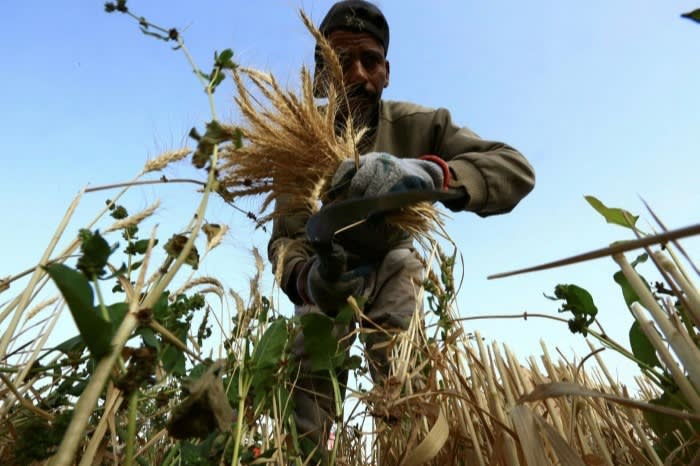 Four trends from bank earnings season Banks have weathered the first six months of the coronavirus storm. But after a surge in provisions for bad debts and fearing that a boost to trading desks will prove temporary, many believe more pain is yet to come. Our banking team teases out four trends from the recent results in Europe and the US. (FT)

Sajid Javid on the Johnson government In the latest from our summer interview series, former UK finance minister Sajid Javid joins Sebastian Payne to discuss whether the government has the right approach to getting the economy moving again. (FT)

“By increasing (tax) rates, you might find it self-defeating, it blows out a decent recovery and you end up getting less revenue than you anticipated.” 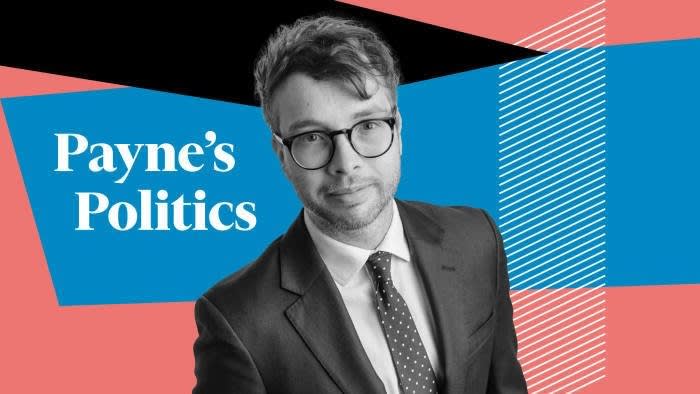