The Hong Kong government has disqualified Joshua Wong, one of the city’s best-known pro-democracy campaigners, from standing in legislative elections next month, citing the territory’s new national security law.

The move came as authorities launched a wider crackdown on pro-democracy activists in Hong Kong. Police arrested four students, including at least one teenager, on Wednesday for forming a group to advocate for Hong Kong independence on social media, in the first such arrests under the tough new legislation.

The government said Mr Wong and 11 other pro-democracy candidates were unsuited to serve in the Legislative Council, the city’s de facto parliament, citing behaviour that included objecting to the national security law, promoting independence and soliciting help from foreign governments.

“Clearly, Beijing shows a total disregard for the will of . . . Hongkongers, tramples upon the city’s last pillar of vanishing autonomy and attempts to keep HK’s legislature under its firm grip,” Mr Wong wrote on Twitter. (FT)

“I’m losing money on everything,” a snake breeder in Guangxi said. Under global scrutiny over the pandemic’s outbreak, China is clamping down on the exotic species market. Follow our coronavirus live blog.

US economy suffers historic contraction The US economy contracted by the most in postwar history in the second quarter as unprecedented shutdowns closed businesses and left millions of Americans out of work during the pandemic. Stock and crude oil markets dropped on Thursday, following the news. (FT)

China fires warning shot to UK over ‘cold war’ with Beijing China has warned the UK not to allow “cold war warriors” to “kidnap” cordial relations between Beijing and Britain, firing a new salvo in the ongoing diplomatic row. Meanwhile, Standard Chartered warned it risks being caught in the crosshairs of US-China tensions as loan-loss provisions triple. (FT)

Trump floats prospect of delay in US election President Donald Trump raised the idea of delaying the November election, which he does not have the power to do. Barack Obama on Thursday called for reform to US voting laws during his eulogy of civil rights leader and congressman John Lewis. Meanwhile, Joe Biden is nearing a choice for a running mate. (FT) 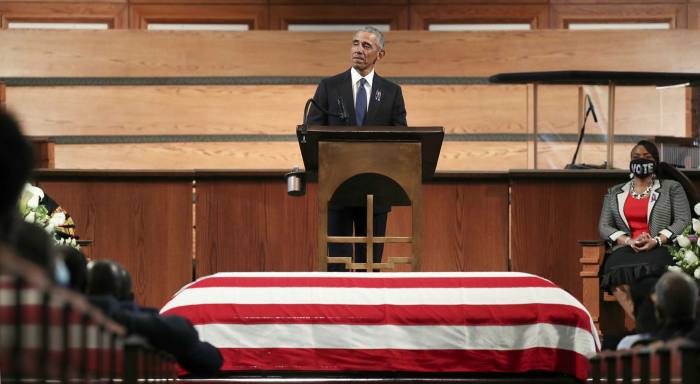 Samsung looks to global pick-up in devices sales Samsung Electronics expects a global recovery in demand for mobile devices and consumer electronics in the second half after an increase in online activity during the coronavirus pandemic helped boost earnings. However, Huawei has overtaken Samsung as the world’s biggest smartphone player. (FT, CNBC)

Pompeo faces backlash over troops withdrawal Mike Pompeo, the US secretary of state, on Thursday was grilled on Capitol Hill over the Trump administration’s decision to withdraw almost 12,000 US troops from Germany, with some senators framing the drawdown as advantageous to Russia. (FT)

Taiwan’s democracy champion dies Former Taiwan President Lee Teng-hui, the country’s first democratically elected president who was known for helping Taipei transition from away from autocratic rule, died on Thursday at the age of 97. (FT)

Nasa craft heads to Mars Nasa’s Perseverance rover blasted off from Cape Canaveral, Florida, on its mission to the red planet on Thursday morning. The rover is expected to land on the Martian surface on February 18, 2021. (AP) 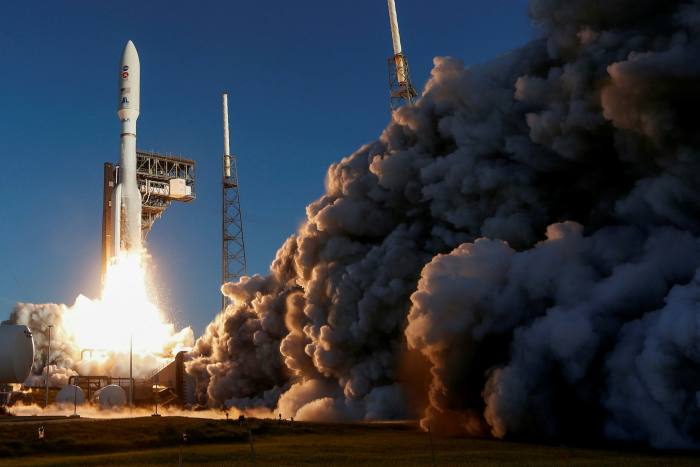 China PMI China’s purchasing managers’ reports on Friday will offer a chance to gauge the strength of economic recovery. PMI is expected to ease to 50.7 from June’s three-month high of 50.9, according to a Reuters poll of economists. (FX Street)

Oil majors report earnings ExxonMobil and Chevron report on Friday. Exxon is expected to post its second quarterly loss in a row, with Chevron also set to swing to a loss. (FT)

Big Tech’s leaders squirm in the spotlight Wednesday’s Congressional hearing cast the leaders of 21st century corporate America as modern robber barons, and served as a one-shot opportunity for liberals to make their case that US antitrust law needs urgent change. (FT)

Covid vaccine could split America In the battle between public science and anti-vaxxer sentiment, science is heavily outgunned, writes Edward Luce. It faces a rainbow coalition of metastasising folk suspicions on both the left and the right. (FT) 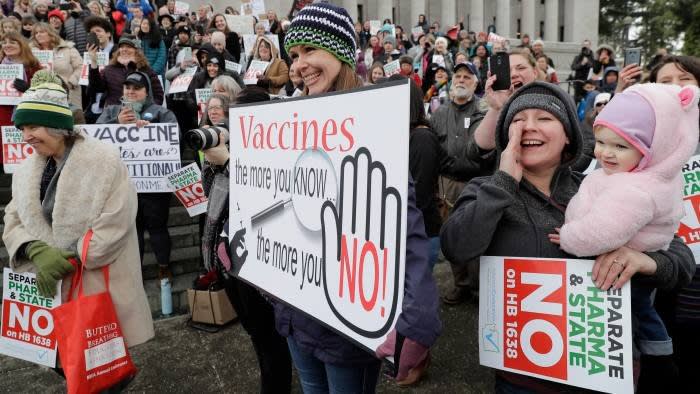 A protest in Orlando, Florida, in April. Anti-vaccine campaigners are having a great pandemic © AP

Start-ups for silver surfers Investors are tapping into start-ups serving the “elderly”, an underserved market they say — with about 10,000 Americans turning 65 each day and accounting for more than half of US spending, writes Gillian Tett. And the pandemic has forced them online more quickly. (FT)

Private equity gags on its own medicine Amid a wave of coronavirus-fuelled corporate restructurings, private equity firms — long seen as aggressive interlopers themselves — are appealing to courts over the behaviour of rival creditors. (FT)

The menacing future of China’s AI President Xi Jinping is using artificial intelligence to give his government more control of its people. He wants China to achieve AI supremacy by 2030 — and a visit to Beijing’s Institute of Automation gives insight into the type of world such advancements could create. (Atlantic)

A cold war does not answer China’s challenge Beijing has grand ambitions to replace the US as the world’s most powerful nation. But to paraphrase George Kennan, it is not seeking the global defeat of capitalism, Philip Stephens writes. (FT) 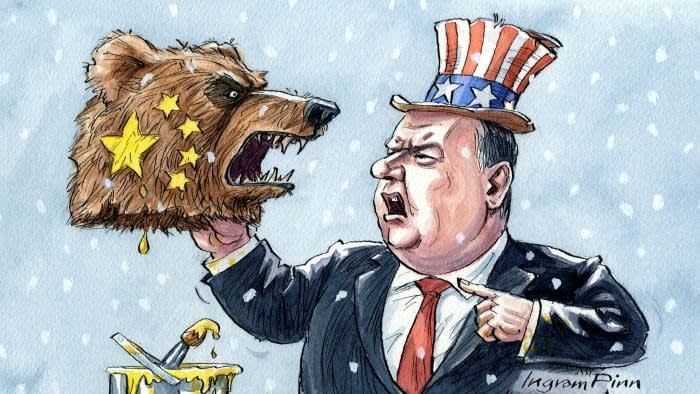 FT 300: financial advisers Coronavirus has proven a boon to financial advisers, who are discarding the 2008 crisis playbook as markets begin to recover. Here’s the FT’s annual list of the top 300 US investment advisers by state. Read more in our special report. (FT)

We are now accepting submissions for the FT North America Innovative Lawyers 2020 awards.

‘Motherhood penalty’ made worse by pandemic New data show women are more likely to face job losses during the pandemic and to bear the brunt of childcare, writes Lucy Warwick-Ching. Jo Ellison reflects on the viral #challengeaccepted and finds it promotes little more than vanity. (FT) 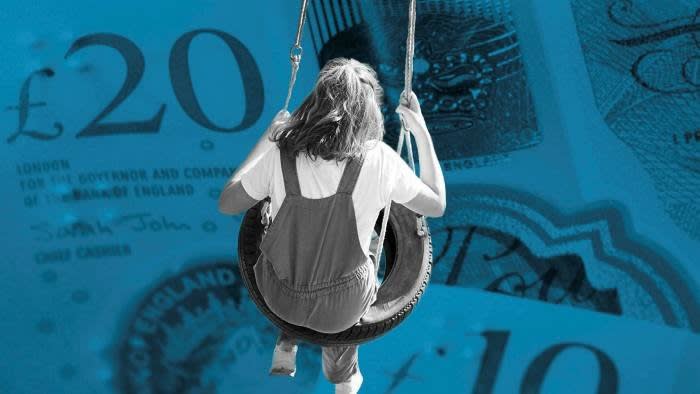 Christiana Figueres on Covid, climate crisis and inequality The former head of the UN climate secretariat, speaks to the FT’s Vanessa Kortekaas about the need to tackle Covid-19 and the climate crisis simultaneously, why the pandemic is an opportunity to build low-carbon economies and how the 2020 US election will affect climate policy.