“There is a reason it has hit America worse than any other advanced nation,” said Ms Harris, who appeared on stage with Mr Biden in his hometown of Wilmington, Delaware. “It is because of Trump’s failure to take it seriously from the start.”

Mr Biden said his campaign had raised $26m in its single biggest fundraising day on record, a sign that her historic selection has energised the Democratic party base. He will accept the party’s nomination at a virtual convention next week.

The senator from California is in line to be as much vice-president as co-president and viable stand-in, writes Janan Ganesh. In the FT Magazine, Edward Luce traces Mr Biden’s long political road to be the party’s standard bearer — more below. (FT)

Where do Mr Biden and Mr Trump stand in the polls? Follow our tracker for the latest.

The FT View is that the UK’s future prosperity depends on a robust recovery. Follow our live coverage here. 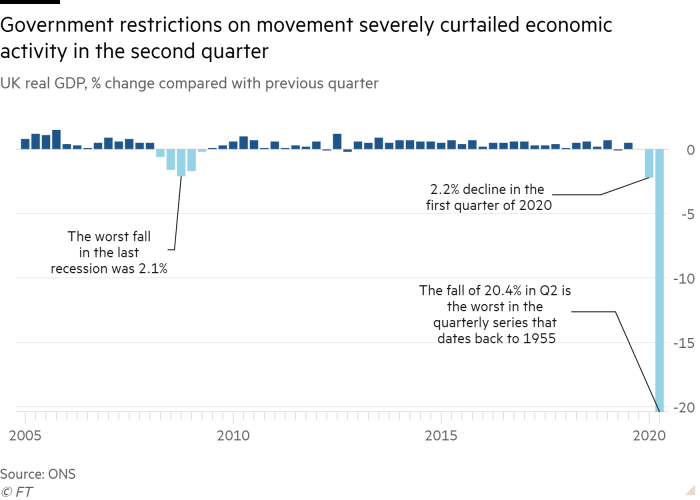 Exclusive: Lawyer in UBS case probed The UK lawyers’ regulator has sent a list of concerns to Caroline Stroud, one of the country’s most powerful employment litigation lawyers and a Freshfields partner, over her conduct during a review of UBS’s handling of an alleged rape. (FT)

Exclusive: Swissport rescue deal Lenders to the world’s biggest baggage handling group have offered a rescue package that would restructure its €2.1bn of net debt and could transfer ownership from struggling Chinese conglomerate HNA Group. (FT) 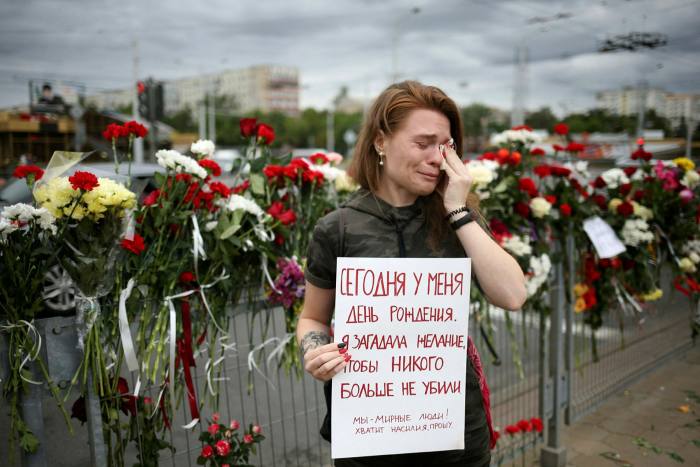 Alina Krus, 26, at the site where a protester died amid clashes in Minsk, Belarus: ‘It’s my birthday today. I made a wish that no one gets killed’ © AP

Canada defends oil sands Canada’s natural resources minister has vigorously defended controversial oil sands projects as critical to funding its energy transition. “There is no way we are reaching net zero (by 2050) without Alberta,” Seamus O’Regan told the FT. (FT)

Goldman bids for GM credit cards Goldman Sachs is seeking to more than double its consumer business by buying General Motors’ credit card franchise, which carries loan balances of roughly $3bn, just a year after forming a similar partnership with Apple, according to people briefed on discussions. (FT)

Transatlantic tensions Woody Johnson, US ambassador to the UK, made “inappropriate or insensitive comments” regarding religion, sex and race, the Department of State’s inspector-general found. Ice-cream maker Ben & Jerry’s waded into the English Channel migrant crisis, while UK authorities fear illegal gun smuggling is contributing to a rise in crime. (FT, NYT) 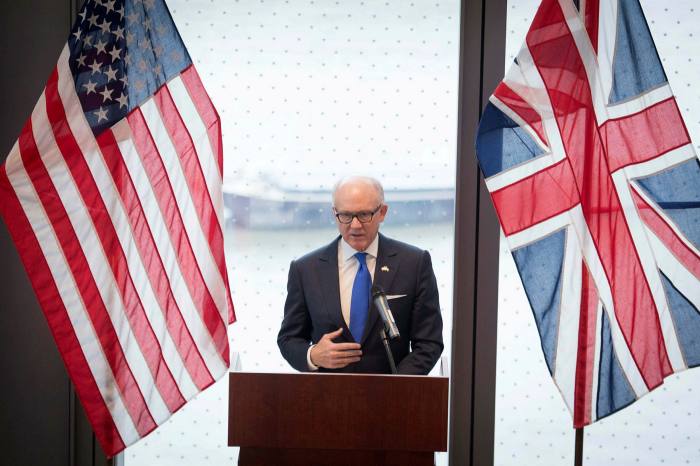 Woody Johnson, billionaire scion of the family that founded the Johnson & Johnson pharmaceutical company, had no diplomatic experience before being appointed to the Court of St James’s © Reuters

DoorDash faces employment order San Francisco’s prosecutor has filed for a preliminary injunction against DoorDash to force the US food delivery leader to reclassify workers as employees, days after a similar request was granted against Uber and Lyft. Lyft reported a 61 per cent drop in second-quarter revenue. (FT)

Train derails in Scotland Three people were killed after a train travelling between Aberdeen and Glasgow in north-east Scotland derailed on Wednesday. It was the UK’s first fatal rail crash in more than a decade. (FT)

Sumner Redstone, media mogul, 1923-2020 One of a generation of media titans who shaped the business of films and television, Sumner Redstone, who transformed a regional drive-in cinema chain into a global entertainment empire spanning Paramount film studio, Viacom and CBS, has died aged 97. (FT) 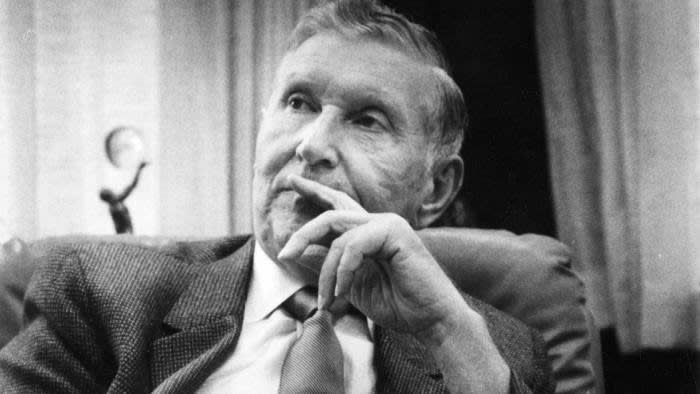 A-level results Students will receive grades on Thursday based on a complex calculation after the pandemic cancelled A-level exams in England, Wales and Northern Ireland. But the accuracy and fairness of the process has been fiercely disputed. (FT, Guardian)

US unemployment Initial claims for US unemployment benefits for the week that ended August 8 are due on Thursday. Last week the number fell by 249,000 to a seasonally adjusted 1.2m. (FT)

Joe Biden’s campaign of a lifetime Should he make it to the White House, Joe Biden would have completed the longest marathon in US political history, Edward Luce writes. But what manner of president would he make? November’s contest will be an election to decide America’s place in the world, Philip Stephens writes. (FT) 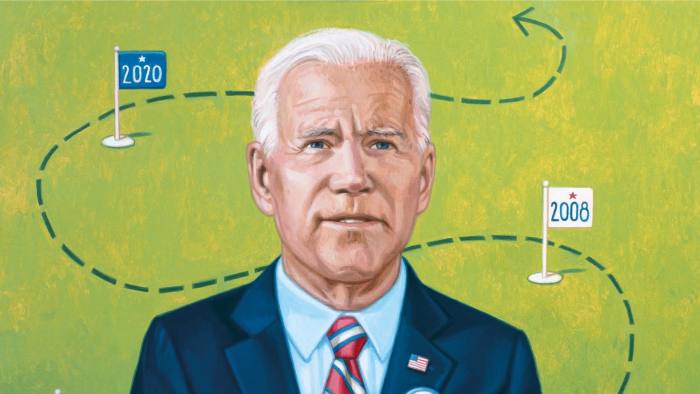 He has been trying to win the White House for more than 30 years. Can he beat Donald Trump in 2020? © Marco Ventura

Russia’s vaccine geopolitics Experts warn the rushed rollout of an ineffective — or worse, unsafe — vaccine would be a major setback to mass immunisation efforts and could prolong the pandemic. But Russia’s attitude is that if the vaccine works, who cares if it broke the rules, writes Moscow bureau chief Henry Foy. (FT)

Kodak’s curious pivot The usual critique of state aid is that governments should not be in the business of picking winners. It is worse when they pick losers, writes Andrew Edgecliffe-Johnson. Why did the Trump administration choose to help Kodak, the photography pioneer, over more experienced pharmaceutical companies? (FT) 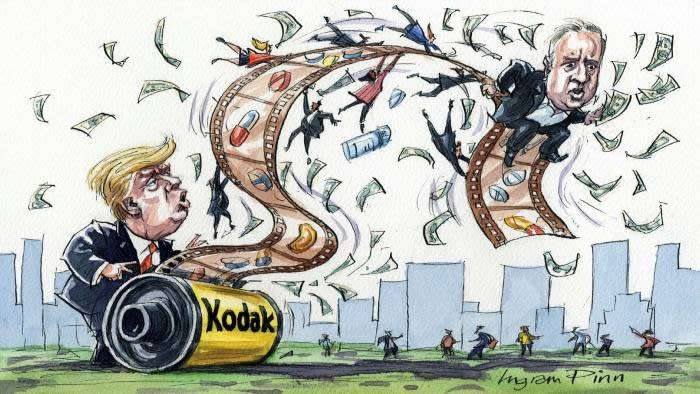 Working without childcare Many parents feel under pressure to return to the office after months of juggling children and career under lockdown — but have no childcare to support them. For millennials, twice bruised by recessions, moving back home with their parents is financially astute. (FT)

Can we trust Spacs? Special acquisition vehicles, which once had a reputation for allowing shady financiers to unload dodgy businesses, have become the hottest asset class in US equity markets. But an FT analysis from 2015 to 2019 shows Spacs are still a dicey bet. (FT) 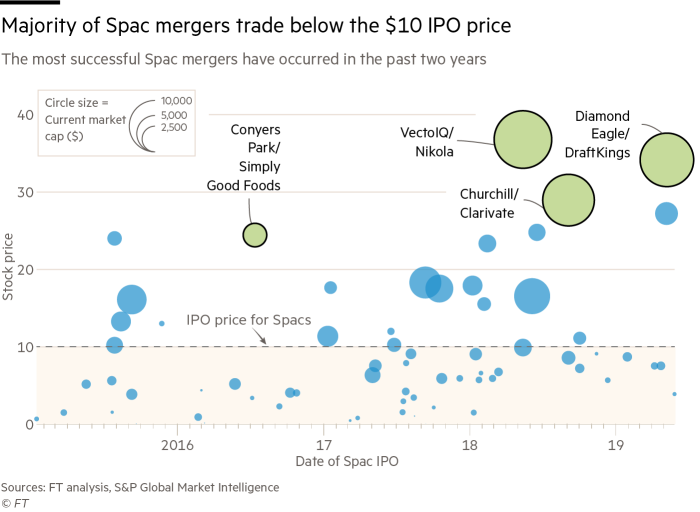 Quiet on the court As professional sports resume, we are learning how the absence of crowd energy affects athletes. The dynamic is most strange in tennis, where any noise save the occasional gasp is frowned upon. How did silence become the unwritten rule of the game? (Atlas Obscura)

How Argentina sealed a $65bn deal Martín Guzmán, economy minister, and Jennifer O’Neil, a BlackRock managing director, needed a “creative compromise” to restructure $65bn of foreign debt — a breakthrough all the more striking after an intractable stalemate. (FT) 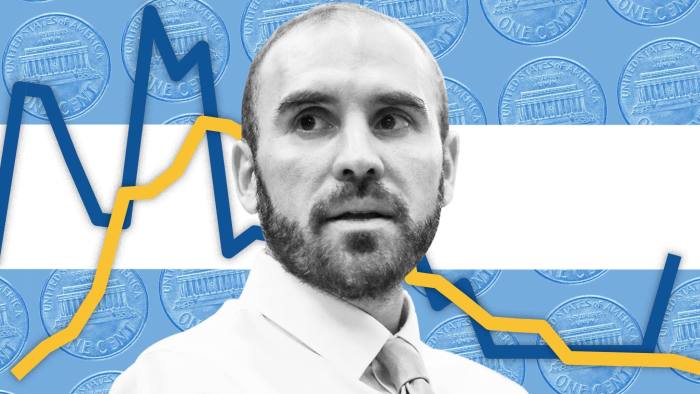 Martín Guzmán, the economy minister, made a deal with Argentina’s creditors to restructure its debt © FT montage; Bloomberg

Stock market summer school The scarcity of holiday camps this summer has left many working parents wondering how to occupy their children. Moira O’Neill has a solution — a five-day business education programme for her children that will hopefully pay dividends. (FT)

Renewed fears in Hong Kong Jimmy Lai, media boss and democracy advocate, pledged to continue his fight on release from arrest on Wednesday. In April, he talked exclusively with the FT about Beijing’s contentious national security law. (FT)