The Federal Reserve is extending the emergency lending facilities it set up to shore up financial markets during the pandemic until the end of the year, in the latest sign of its concern that the coronavirus crisis will continue to weigh on the US economy.

The board of the US central bank announced the decision on Tuesday as its monetary policymakers began a two-day meeting. The lending facilities, which were designed to support short-term funding and corporate debt markets and to offer loans to struggling midsized businesses, were due to expire at the end of September.

“The three-month extension will facilitate planning by potential facility participants and provide certainty that the facilities will continue to be available to help the economy recover from the Covid-19 pandemic,” the Fed said.

The facilities had “provided a critical backstop, stabilising and substantially improving market functioning and enhancing the flow of credit to households, businesses, and state and local governments”, it added.

Fed officials had signalled that the lending facilities would be in place as long as they were needed and would not be allowed to lapse prematurely. (FT)

The FT has launched a global economic recovery tracker to provide a first snapshot of activity across key sectors. It tracks alternative indicators, such as box-office receipts, ahead of the release of official statistics. Follow our live coverage here. 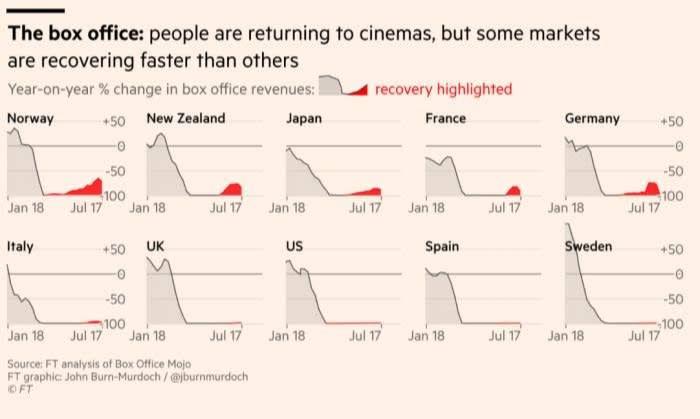 Big Tech goes to Washington This summer’s box office event will be in Washington on Wednesday as the heads of Amazon, Apple, Alphabet and Facebook appear together before Congress for the first time. The grilling is the culmination of 13 months of investigation by lawmakers into the market power of Big Tech. (FT) For the first time, the heads of Amazon, Apple, Alphabet and Facebook will testify to Congress together © FT montage; Getty Images; Bloomberg | Sunder Pichai of Alphabet, Jeff Bezos of Amazon, Tim Cook of Apple and Mark Zuckerberg of Facebook

Twitter freezes Trump Jr’s account Twitter has temporarily suspended Donald Trump Jr from tweeting for violating its misinformation rules after he shared a video of politically-affiliated doctors promoting the use of hydroxychloroquine to treat coronavirus. (FT)

Gold stalls near record high as dollar decline pauses The price of gold on Tuesday came within striking distance of hitting $2,000 for the first time, but the yellow metal’s rally lost momentum as the US dollar firmed following a heavy sell-off. (FT) 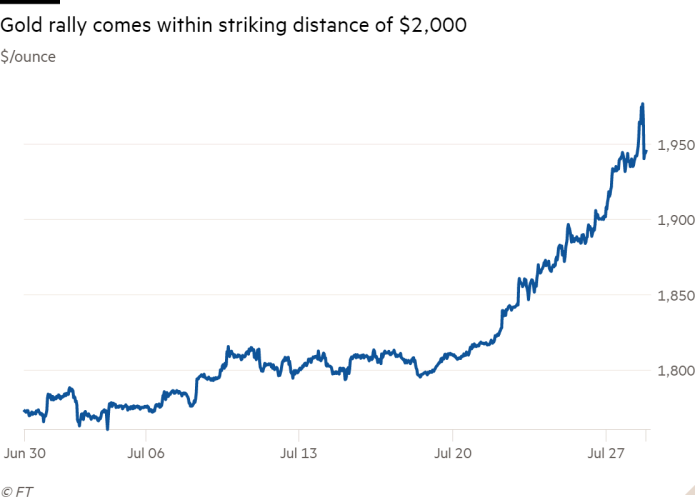 UK businesses borrow £50bn Close to 1.2m businesses had taken bank bailout loans and other debt that were partly or fully guaranteed by the government, showing the continued need for support for companies even as lockdown measures are eased. (FT)

1MBD verdict Malaysia’s Najib Razak has been sentenced to 12 years in jail after he was found guilty in a corruption trial linked to the disgraced state investment fund 1MDB. The verdict comes just days after Malaysia struck a $3.9bn landmark settlement with Goldman Sachs. (FT) 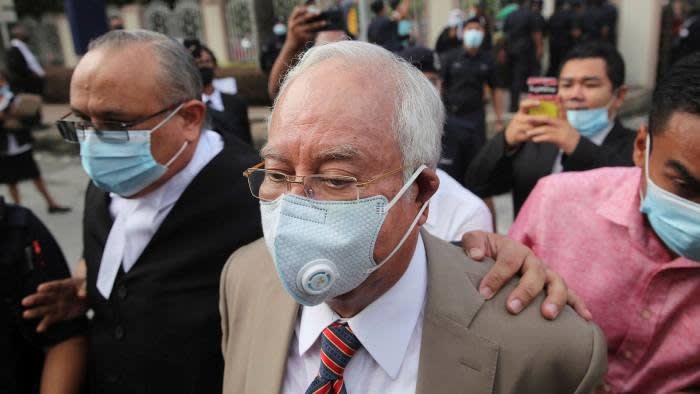 Amazon challenges UK supermarkets Amazon will offer free grocery delivery to its Prime members across the UK by the end of the year, threatening efforts by supermarkets to profit from the boom in online shopping during the pandemic. (FT)

Kodak wins $765m loan to make virus drug ingredients The fallen giant of the photography industry is pivoting to make the ingredients used in generic drugs to fight coronavirus. Shares in Kodak soared to their highest level in about two-and-a-half years on the news, tripling to $7.71 a share. (FT)

Earnings Four of the big UK banks report this week, when the focus will be on the provisions being made for the expected wave of bad loans made to help businesses during the pandemic. (FT)

Why we have to coexist with China It isn’t practical to block out China and its companies, writes deputy Beijing bureau chief Yuan Yang — nor should we want to. Instead, we must find ways to coexist with those we don’t trust. The US-China rift is now about values. What started as a tariff war is becoming ideological. (FT) 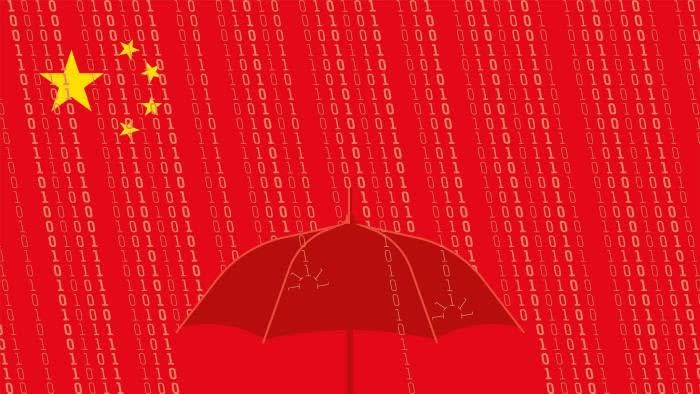 ‘We will have to face the threats presented by Chinese tech with scrutiny and safeguards, not with disengagement’ © Pâté

Japan treads a careful path with China Japan has spent the past 20 years trying to persuade the rest of the world to take a more critical stance on China. But having achieved that goal — with an increasingly hostile response from the US and its allies to a new national security law in Hong Kong — Tokyo is taking a back seat. (FT)

Singapore’s divisions are deepening Covid-19 has highlighted the plight of this prosperous island nation’s vulnerable foreign labourers, writes Audrey Jiajia Li. More than 323,000 low-paid migrants live in cramped conditions, where up to 20 men are packed into a single room. (FT, The Straits Times)

Italy without the crowds From the streets of Florence to the Amalfi coast, the usual summer tourism deluge has become a drought, writes Maria Shollenbarger. It’s a story repeated across Italy, and the challenge is greatest for those who have adapted their businesses to be more America- and Asia-facing. (FT) 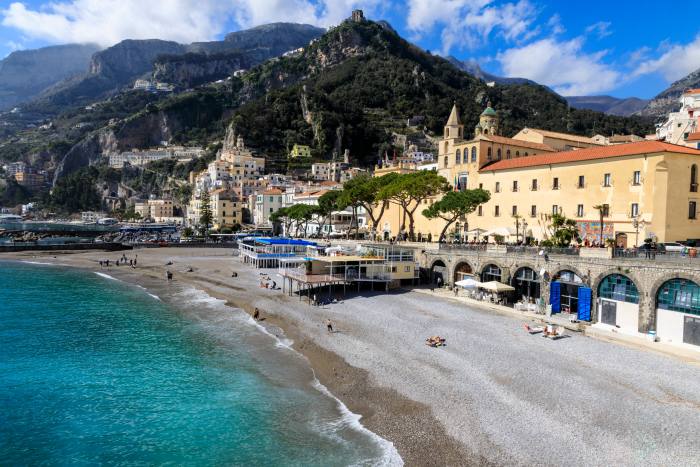 It’s too soon to write off Trump’s election chances Amid a pandemic, a recession and civil unrest, it would be difficult for any incumbent to win re-election. But Donald Trump could exploit “cancel culture” to his benefit, writes Dan Senor, an adviser to Mitt Romney’s 2012 campaign. (FT)

What is Silicon Valley’s plan in India? Facebook and Google have led the charge in pouring billions into Mukesh Ambani’s Reliance Jio, which is set to dominate India’s digital economy from ecommerce to streaming. Here’s what Silicon Valley companies hope to gain. (FT)

Will coronavirus hasten demise of Poland’s coal? Coal has long been seen as the guarantor of Polish prosperity. But even before coronavirus, the industry was lurching from crisis to crisis and becoming an increasing burden on both public finances and the economy. Meanwhile, Poland’s decision to withdraw from a European treaty to combat violence against women has triggered alarm. (FT, CNN)

Tackling Covid-19, the climate crisis and inequality Christiana Figueres, the former head of the UN climate secretariat, speaks to the FT about the need to tackle Covid-19 and the climate crisis simultaneously, why the pandemic is an opportunity to build low-carbon economies and how the 2020 US election will affect climate policy. (FT) 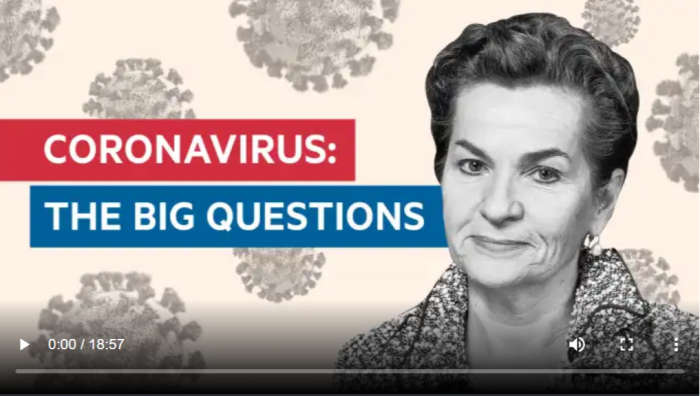