The dollar weakened to a two-year low on Monday as sharp increases in US coronavirus cases and flare-ups around the world weighed on investor confidence.

The dollar index, which measures the currency against a basket of peers, slipped 0.9 per cent to its lowest level since May 2018, as the continuing spread of Covid-19 in the US threatens to dampen the economic recovery.

The poor performance of the US currency — on track for its worst month since April 2011, according to Refinitiv — has supported a rally in gold prices to an all-time high. The precious metal rose as much as 2.4 per cent to $1,945.16 per troy ounce.

“The thing that’s changed in the last few days is that it’s not just gold that has gone up against the dollar, but almost everything,” said Kit Juckes, foreign exchange strategist at Société Générale. (FT) 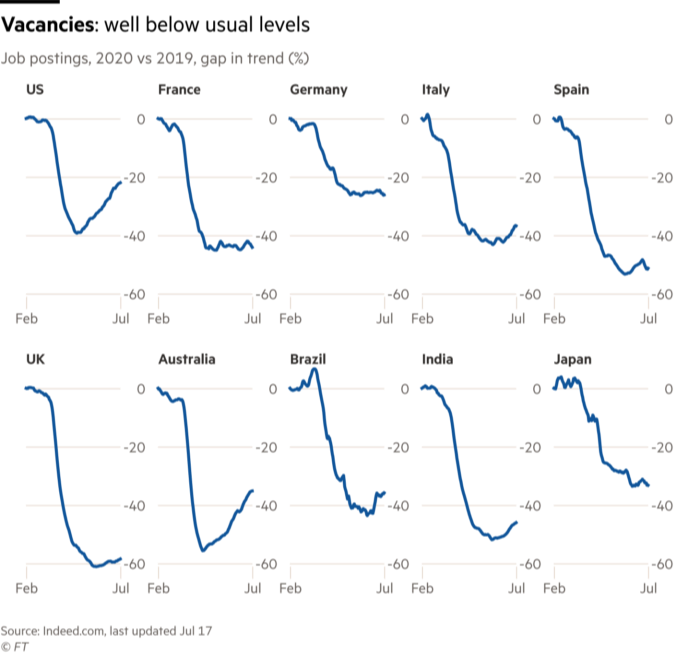 Hong Kong tech index fizzles on trading debut A new index of Chinese technology stocks that trade in Hong Kong failed to impress investors on its debut, as the Asian finance hub seeks to drum up interest in a market that has become a global laggard. (FT) 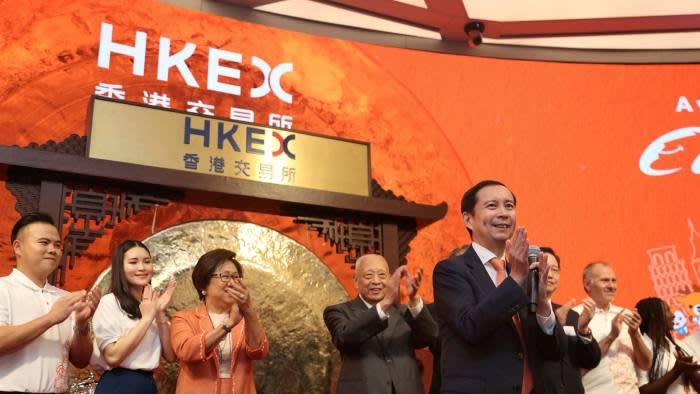 Boris Johnson warns of a second wave The prime minister told more than a dozen British businesses on a conference call that the pandemic could worsen again after the summer. (FT)

LVMH profit dives as coronavirus hits sales The world’s biggest luxury group’s operating profit dived 68% in the first half of the year even as it slashed spending on store leases, hiring and advertising to cope with the pandemic. (FT)

Facebook takes EU to court for invading privacy The social media company claims EU regulators have asked broad questions beyond the scope of two ongoing antitrust probes, and it has requested that the General Court in Luxembourg intervene. (FT)

US baseball league postpones games A coronavirus outbreak affecting one of its teams forced Major League Baseball to postpone two games on Monday, leaving the future of the sport’s season in the balance less than a week after beginning play. (FT) 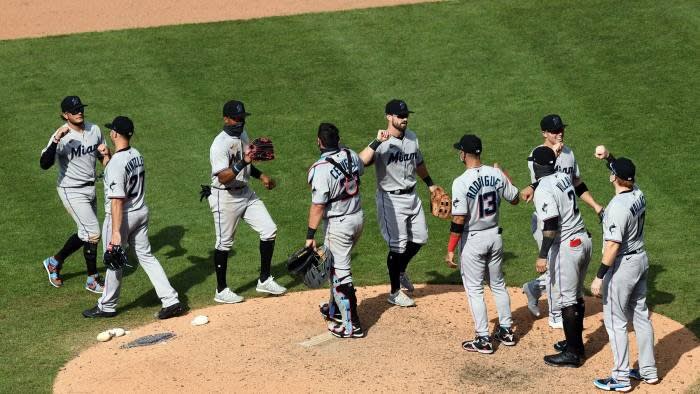 Under Armour receives SEC notice The sportswear maker has received a Wells notice from the US Securities and Exchange Commission indicating it intends to bring enforcement action against the company for alleged potential violations of federal securities law. (FT)

Claim over White House protest A US national guard officer is set to testify that the Trump administration’s forcible clearing of anti-racism protesters from outside the White House last month was “unprovoked” and an “excessive use of force”. (FT)

Big Tech is back in the congressional hot seat On Wednesday, the chief executives of Amazon, Apple, Facebook and Google will be questioned in a House judiciary antitrust subcommittee hearing. This is perhaps the most important and high-profile conversation about monopolies since the Microsoft case of the 1990s, writes Rana Foroohar. (FT)

Hong Kong Q2 GDP Hong Kong is set to extend its recession on Wednesday as the city grapples with the effects of a China-imposed security law on top of the pandemic’s deep impact on its tourism, logistics and retail sectors. (FT, Nikkei Asian Review)

Goldman Sachs has done it again with its Malaysia deal Last week, after months of public sparring and days of tough in-person negotiations, the Wall Street bank finally reached a deal with Malaysia over allegations that it had helped a former prime minister loot billions of dollars from the state investment fund, 1MDB, writes Brooke Masters. (FT) 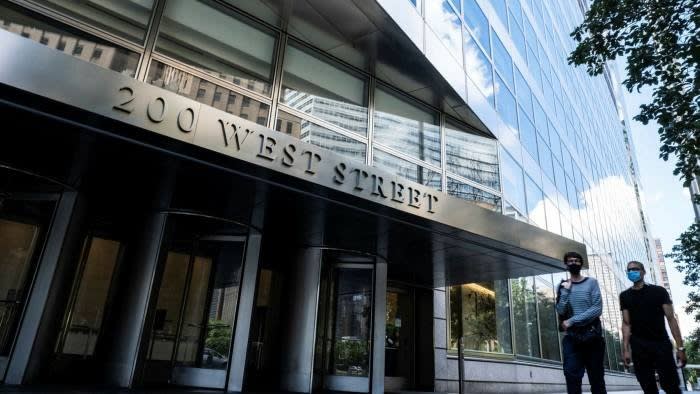 Goldman Sachs has reach a deal with Malaysia © Jeenah Moon/Bloomberg

Lunch with the FT Jim Chanos has been cast as the “Darth Vader of Wall Street” and the “Catastrophe Capitalist”. The 62-year-old short-seller, who predicted the downfall of US energy giant Enron almost two decades ago, prefers to describe himself as a “forensic financial statement junkie”. (FT)

The Uighurs need urgent international support In recent days the horrendous treatment of the Uighur community by the Chinese government has received the attention it requires, writes Phillipe Sands. Some assert that a genocide is being perpetuated by China. (FT)

Person in the News Sarah Gilbert, the researcher leading the race to a Covid-19 vaccine, has devoted her career to combating deadly pathogens that may result in a pandemic, writes Clive Cookson. The Oxford scientist and her team recently published encouraging results from the first phase of testing of its ChAdOx1 vaccine. (FT) 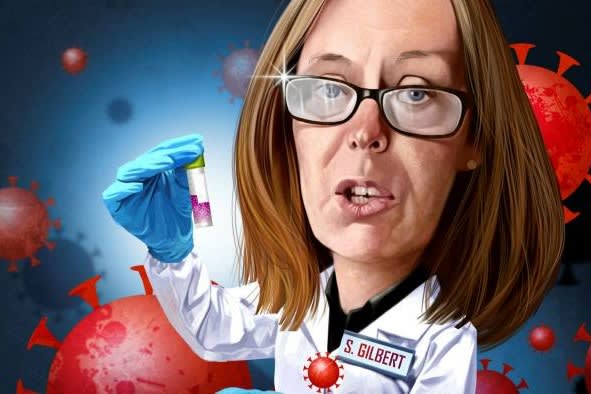 The ghost City Coronavirus could permanently transform London’s financial centre, which traces its roots back to 1376, as the success of homeworking keeps staff home. Hiring in a pandemic is less easy than it looks, Pilita Clark writes — but Andrew Hill says lay-offs are the worst of the bad options facing recession-hit companies. (FT)

Tesla’s market ride Tesla bulls got exactly what they needed last week: blowout second-quarter figures from the electric car maker that helped justify a tripling in the company’s share price so far this year. But the market reaction has once again left investors and analysts puzzled. (FT) 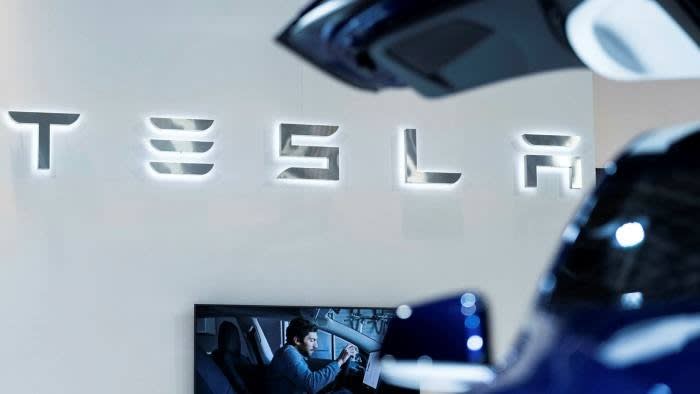 Instead of powering higher after results that beat Wall Street estimates, Tesla shares suffered their first two-day run of declines in a month © AFP via Getty Images

How to spot a Covid-19 outbreak from data Data journalist John Burn-Murdoch examines how the outbreak in England and Wales has unfolded and how data distinguish isolated clusters from community spread. (FT)

Video: How to spot a local coronavirus outbreak from data