Britain’s chances of a robust recovery after the pandemic have been dented by a much more severe deterioration in business investment over the past six months than in other countries.

Companies slashed capital investment spending in the second quarter of the year, according to official figures, with more up-to-date data showing little recovery in recent months.

The weakness of business investment, which since the 2016 Brexit referendum has underperformed both other economies and previous records, bodes ill for the UK’s economic prospects as it limits companies’ likely future growth and productivity, and consequently employers’ ability to pay higher wages.

Lingering uncertainty over the UK’s trading relationship with the EU after the Brexit transition ends on December 31 is also weighing on businesses’ investment plans.

“Business investment is important for long term growth,” said Thomas Pugh, UK economist at Capital Economics, a consultancy. “Businesses which invest more now will be able to produce more in the future . . . and . . . the more, and better, machines a worker has the more they can produce.”

The latest figures highlight the crisis of business investment within the UK economy. In the second quarter of 2020, it contracted more than in any other G7 country, falling 26.5 per cent, the largest quarterly decline on record.

That fall was more than twice that for France and Germany and more than three times the US.

By comparison, the worst quarterly contraction during the 2008 global downturn was of 9.6 per cent.

All types of UK business investment fell, with intellectual property and spending on productive building and structures contracting at the largest quarterly pace on record.

Investment in information and communication equipment and in machinery contracted by nearly one-third in the second quarter. Businesses also nearly halved spending on transport equipment.

In the period since June, statistics suggest that while consumers largely returned to previous spending habits, companies were much more reluctant to invest for the future when their finances were under great stress. 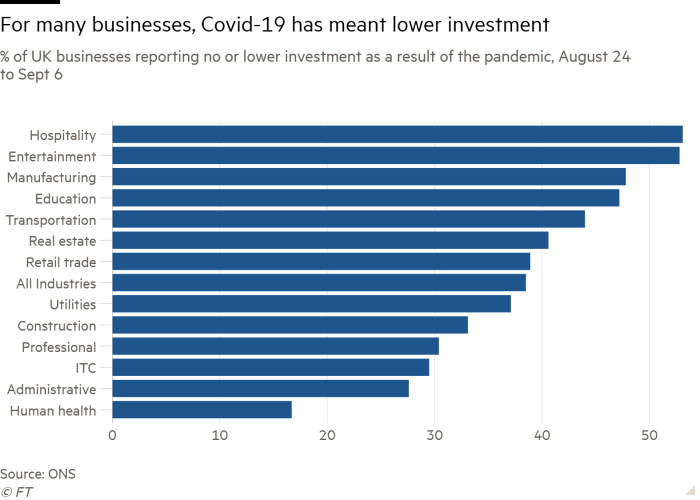 In the latest Office for National Statistics survey of businesses, taken in the two weeks to September 6, nearly 40 per cent of companies reported having lowered or cancelled their investment plans during that period.

Larger businesses, which proportionately undertake most business investment, have cut back harder than the average and more than half of accommodation and food services companies surveyed said they were scaling back their plans.

Foreign investment also dried up, according to data from fDi Market, a Financial Times-owned company that tracks cross-border greenfield investment.

In the 12 months to July, the number of foreign investment projects fell by 35 per cent compared to the same period in the previous year, the largest contraction since records began in 2003. The fall corresponded to an estimated 11,400 fewer jobs created over that period, including 6,000 fewer jobs in business services.

Now that cases of Covid-19 are rising again and the government is imposing new local and national restrictions on public and business activity, economists fear that investment will continue to suffer more than other parts of the economy.

“Uncertainty about the outlook for demand and the risk of a second wave of Covid-19 will ensure that business investment fails to rebound,” said Samuel Tombs, chief UK economist at consultancy Pantheon Macroeconomics.

Victoria Clarke, economist at the wealth management group Investec, added: “A very solid bounce back in business investment in Q3 looks much less likely than it does for consumption.”

Part of the concern stems from surveys which suggest managers in UK companies are extremely cautious about their investment plans.

A Bank of England survey of 2,800 chief financial officers from UK businesses suggested that companies expected their investment levels in the spring of 2021 to be 12 per cent lower than would have been the case without the pandemic. 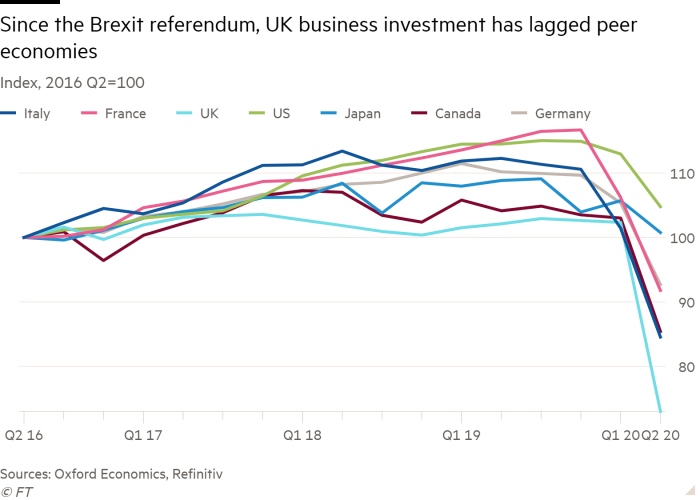 Brexit has also played a prominent role in investment plans. Ever since the 2016 EU referendum the UK has been at the bottom of the G7 pack for capital expenditure.

UK business investment was 27 per cent lower in the second quarter of this year than at the time of the referendum: this contrasted with investment levels in the US being 5 per cent higher than four years previously, even in the middle of the coronavirus crisis.

Many economists and business leaders fear that the UK will continue to lag rivals next year as the economy navigates the aftermath of the end of the Brexit transition period. Dennis Shen, economist at ScopeRatings, a rating agency, said that even were a trade deal to be struck, trade friction would be greater and this will drag on investment and output growth. 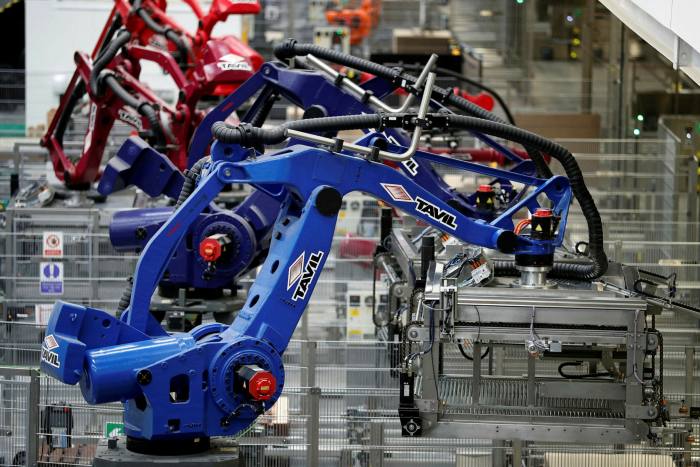 Milton Guerry, president of the International Federation of Robotics, noted in the federation’s latest annual assessment published last week that the UK had “a surprisingly low robot stock for a western European country”. He added that, even before the pandemic, Brexit uncertainty “inhibit(ed) the necessary modernisation of manufacturing production facilities”, which will “determine the speed of economic recovery after the pandemic”. 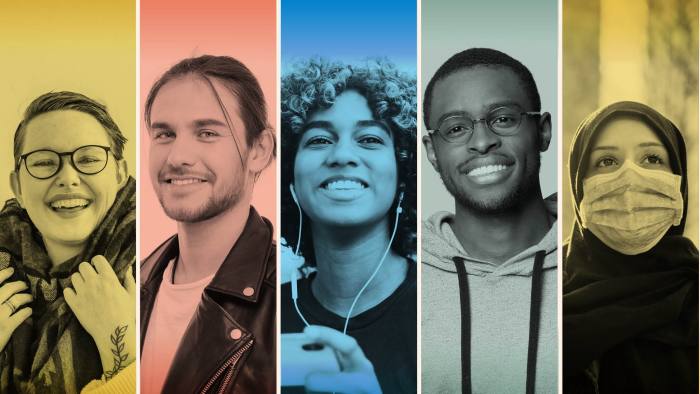 We are exploring the impact of the pandemic on young people and want to hear from readers between 16 and 30. Tell us about your experiences from the past six months via a short survey.